Take some chutzpah, add a high wackiness quotient and what you have is ‘creative’ business ideas from the new age entrepreneurs.

Not Such a Doggone Idea What started off as an inane conversation With his friends one evening three years ago has now turned out to be a lucrative business for Mumbai’s Wasiff Khan, the city’s only pet caterer specialising in dog food. Referred to as ‘Pet Chef’ or ‘Pet Dabbawalla’, Khan prepares homemade cuisine that includes rice-vegetables and meat meals customised for the pampered canines and home-delivered piping hot. Interestingly, Khan himself doesn’t have a pet dog. So he went out on a limb, doing his own research by speaking to people with pet dogs and vets. “I started with my home kitchen, where I prepared food and supplied it to people with pets for sampling free of cost. All this paid off and in the first month, I got confirmed orders for 35 meals,” recalls Khan.

Today, his clientele is spread across the city’s downtown Colaba area to suburban Borivili. Meals are prepared and delivered with the help of a 25-member staff—including four chefs—and 10 delivery scooters. He charges Rs 30 for a basic meal and Rs 120 for a premium meal. Started with a mere Rs 5,000, this venture now has a turnover of Rs 55-60 lakh per annum. Khan is now taking his business pan India with Delhi, Bangalore and Chennai on his list.

Fire in her belly 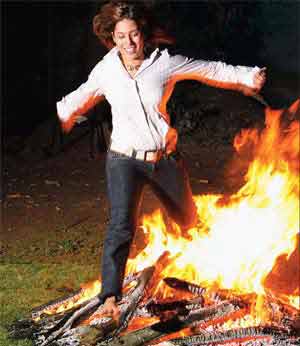 The innocuous sounding name of the company— and the diminutive frame of its founder—conceals the derring-do involved. Kumar terms herself a corporate fire-walker: making executives of all rank and shape walk on burning embers of charcoal and wood. And curiosity very nearly killed the cat in this case. “The first time I tried firewalking was after witnessing it in Malaysia seven years back and got my feet badly burnt in the process,” she recollects.

The idea, she says, is to help executives overcome the fear of failure through negative instigation. The three-step workshop starts with bending a steel bar by the throat, just below the Adam’s apple area. This is followed by a glass walk: walking barefoot on shards of glass without getting your feet cut. Finally, she holds the firewalk. Kumar claims to have a zero-per cent accident record, reinforced by her refusal to have any medics on site during her workshops. Of course, for a ‘hot’ profession like hers, Kumar charges a cool Rs 1.5-2 lakh for a 2-3 hour session for a minimum of 50 executives from her clients whose number has already swelled to 300.

She organises 10-15 such firewalk workshops a month and closed the last year with a turnover of Rs 50 lakh. 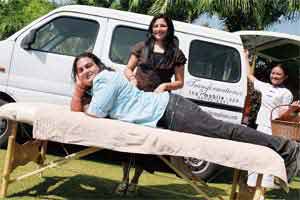 At a kitty party hosted by Meenakshi Kejariwal, wife of an affluent businessman in Delhi, at her farm house in Vasant Kunj, it wasn’t the usual goodies and accompaniments that were the talking point. What stole the show was the spa—quick sessions of warm stone therapy, oil massages amidst an aromatic mist— she had organised at her place. Move over butter chicken, pizzas and Chinese food—Delhiites’ latest home delivery fad is ordering a home spa.

Says Yash Bhatia: “Hectic schedules due to a demanding event management business always forced my wife and me to look for an escape. And nothing could be better than indulgence at a spa.” From there sparked the idea of a personal set-up of therapists to extend the magic of spa therapies to their clients.

Launched three months back, Transformations already has a roster of 150 regular clients. “We have a mobile van loaded with some equipment, cosmetics, massage oil and scrubs that helps us to reach out to our clients’ place on demand to set up a spa in 15 minutes,” he informs. Bhatia and his wife Rasika initially invested Rs 10 lakh in the venture. The duo is now planning to launch the service in at least one more metro in the next six months. Services are currently limited to women and charges range from Rs 600 to Rs 8,000. 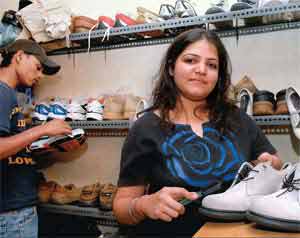 Abrainwave, a television contest for bright business ideas and voila, you have a business on the move. That’s how Vinnie Chadha, a fresh college graduate, got started with Reboot—an exclusive laundry for shoes, boots, sneakers and any other kind of footwear. “I did some research and realised that expensive footwear requires special treatment and care which is not available at the roadside cobbler’s or shoeshine stall,” she says.

Which is when she got hold of a database of names from the corporate world and did some cold-calling. “We use the SMS to good effect—contacting potential clients after getting references from existing customers. In addition, direct marketing through distribution of pamphlets at public places also helps,” Chadha informs. And of course, it helps that the charges are from very low to reasonable. So, while a sports, canvas or a leather shoe will be cleaned for Rs 100, suede ones would cost Rs 110, cleaning boots costs between Rs 120 and Rs 150. She has now added handbags, luggage pieces, purses and belts to the portfolio for which charges range between Rs 100 and Rs 650.

Starting off last year with an investment of Rs 2 lakh, Chadha today turns in Rs 50,000 every month with the help of seven employees spread across two workshops in Mumbai where the cleaning process is carried out. Delivery of shoes usually takes 36 hours, though it could take longer in monsoons, Chadha informs. She boasts of 2,000 clients and also has tie-ups with Nike and Reebok who send their shoes for cleaning at her workshops.

A business idea that won them the ‘best student team’ award at Eureka 2006, the international business plan competition organised by IIT Bombay, has now turned into the foursome’s maiden business venture that was born formally five months ago. “TempoStand.com is a complete music portal where people can create, share, mix and remix music. The site aims to foster creativity in music and grow with the users and use the internet as a distribution channel,” says Dobhal.

All this is possible thanks to Creative Commons (CC) licence, which ensures that all music on the site is protected from plagiarism and other violations. The portal is not specific to any music genre— Hindustani, sufi, folk, rock, jazz, punk, carnatic, blues and all other genres are invited. Their only condition—it has to rock big time and be original.

TempoStand also tracks down local artists who create original music, then records their stuff and undertakes the marketing. The portal already has 40 artistes on board. What about revenues? “There is the conventional method of having premium accounts and a user can purchase music online; promoting music bands through sponsorships and contextual advertising. We have an online store that sells music,” says Dobhal. Users can either buy an entire album or create their own customised CD by selecting eight tracks, which are then delivered to them. In addition, the portal is looking at offline revenue models through live events and mobile content among others.

Started with an initial investment of Rs 1 lakh, the portal’s business model is based on revenue sharing with the artistes rather than charging them a fee. It has recently released its first album ‘Lights’—a compilation of music by eight Indian artistes with music from different genres. A rocking start for the bunch of techies.

Beauty and the beach