Home
Business Today
BACK OF THE BOOK
September 7, 2008
Story

On a (merit) roll

In a country where quotas are ubiquitous, many students from poor households in Andhra Pradesh are getting their share of the higher-education pie purely on merit basis—thanks to a unique programme that aims to "poverty-proof" them. A report by E. Kumar Sharma.

Thallapalli Rekha, 17, has never been to a city before. The first time she came to Hyderabad just two months ago from Chirlavancha village, 250 km away, Rekha was pleased to discover a life where she could expect 24-hour power supply. Yet, away from the hustle and bustle of urban moorings, this village girl has a terrific academic record that puts her quite at par with the best in her age group. She passed her 10th standard examination with flying colours and a score of 519 marks out of 600. Today, she is pursuing further studies in Hyderabad at a private college known for churning out students for competitive examinations for engineering and medicine after the Higher Secondary examinations. Rekha, enrolled at a junior college of the Narayana Group, could well be one of them. Future secured: Merit has empowered these girl students to face the future with confidence
The reason: despite coming from an impoverished background, she needs to focus only on her studies. Her father, 55-year-old farmer Chandraiah, does not shell out a penny for her education; he does not need to. Rekha’s annual fee of Rs 35,000 (Rs 70,000 for two years) is being borne by the government (largely by the central government and a part by the state government).

Rekha’s friend Alwala Soujanya has also made it to this college in Hyderabad with an impressive score of 482 out of 600 in her 10th standard. With choked voice and moist eyes, she says she would have scored much better had she not lost her father, Alwala Rajaiah, a small roadside eatery owner, last year.

In the same college, but a few blocks away, in a separate facility for boys, is Chavanlal Lavudya, 16, from the local Lambada tribe, who aspires to become a software engineer some day. Son of a farmer, he cleared his secondary examination with 500 marks out of 600, and is now enrolled in the college. So, what brings these three together? Rekha, Soujanya and Lavudya are three of the more than 8,200 students who got admission in July 2008, at the beginning of the new academic year, into 35 colleges spread across Andhra Pradesh, with financial support from the government.

What’s common to all these students is just one factor—they are all meritorious and all of them come from poor households.

In a country where education quotas are ubiquitous, these students are part of a unique programme that aims to “poverty-proof” them. “This is poverty-proofing with a financial support and no business model, at least, at the moment,” says T. Vijay Kumar, CEO, SERP (Society for Elimination of Rural Poverty—SERP, in quickspeak, is funded by the World Bank and is backed by the state government and chaired by the Chief Minister). 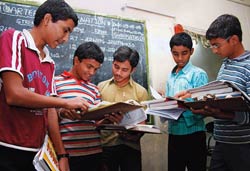 Merit and means: One meritorious child per poor household can have education
SERP’s goal is to improve livelihoods through its poverty alleviation strategies that work via empowerment of women self-help groups. It is also involved in microfinance under the Self Help Group model. In Andhra Pradesh, about 10 million rural households are covered under its Self Help Group network, each with a monthly income of less than Rs 5,000. The objective, says Kumar, is to ensure that at least one meritorious child from each of these households gets access to higher education.

The funding, at the moment, is from the RIADP (Remote and Interior Area Development Programme), a Government of India initiative, aimed at providing focussed development to those in remote and inaccessible regions. Other than funds under this centrally-sponsored scheme, additional resources for this project are being tapped from the SCP and TSP components of state budget (SCP—Special Component Plan—is for the development of scheduled caste population; and TSP—Tribal Subplan—is for supporting ST candidates. The norm is that 16.2 per cent of the annual Budget outlay of all state government departments is to be spent for the development of SCs and similarly, 6.6 per cent of the Budget has to go to STs).

Chavanlal Lavudya
The selection criteria is “merit and means” (poor and meritorious students who have secured more than 400 marks out of 600 in their 10th standard school-leaving (SSC) examinations). On similar lines, the Department of Rural Develop-ment plans to support scheduled caste and scheduled tribe candidates who have studied in Social Welfare and Tribal Welfare Hostels and Ashram schools and secured 450 marks and above in the SSC examination.

However, financing the education of these 8,200 students is not a piece of cake. The challenge—this model would not be sustainable if the money were to come only through grants. For this, a business model will have to be evolved. Says Kumar: “It could happen in a cou-ple of years once the rural households realise the benefits from this and see clear gains in investing and saving for this, much like they would do to buy a buffalo. After all, this is an investment with a high rate of return.” Therefore, he says, “from the point of a business model, I would say, it is still at a proof-ofconcept stage.”

Alwala Soujanya
The fees (Rs 35,000 per annum), is lower than the amount normally charged. That’s the reason some private colleges were not very upbeat about this programme initially.

Typically, the fee is around Rs 45,000 to Rs 60,000. A bulk of the students (about 80 per cent) have taken admission into the Narayana Group of Colleges and those run by the Sri Chaithanya Educational Institutions, which offer two-year intermediate courses integrated with specialised coaching for IIT-JEE, AIEEE and EAMCET 2010, at a concessional rate of Rs 35,000 per year for both engineering and medical streams. The fee includes charges for training students to bring them into the mainstream with regular batches of students, quality instruction, focussed coaching, supply of course material, board and lodging.

Most of the education institutions are not complaining, for now. “The reason we opted for this was that we were not only able to get involved in a social cause, but also that we were getting some very bright students,” says K. V. Raghunath, Vice Chairman, Narayana Group of Colleges.

Thallapalli Rekha
However, disparities remain even for these bright students. Some Telugu-medium students are not quite comfortable with English. To bring them into the mainstream, colleges have drawn up special schedules. “To help some of us overcome this quickly, the college is handing out booklets, listing out commonly used English words and their Telugu equivalents. That helps indeed,” says Soujanya, who has heard of Satyam Computer Services and wants to be a software engineer. Wholesome education: Food and lodging taken care of, focus can be on studies
Colleges, on their part, are also making sure there is no lacuna. The performance of each student is being tracked on a weekly basis, and courses and content are being packaged accordingly. These colleges are known for excellent coaching facilities for competitive examinations. At Narayana, for instance, there is parallel coaching provided for common entrance tests for engineering and medical colleges.

It’s early days yet, but this education initiative promises long-term change. SERP has so far focussed on issues like livelihood, food security, health and nutrition through the route of women’s empowerment.

Now, it is moving to the next level with an inititiave that focusses on education. Reason: It is arguably the surest way out of poverty for such children. “This will help address the issue of equity in education as the poor and deserving will now be able to overcome the problem of poverty while accessing high quality education at par with the privileged,” says P. Sudhakar Rao, Project Manager, education, SERP. Surely, few will disagree with that.