Home
Business Today
BACK OF THE BOOK
Nov 4, 2007
Story

What does Ramzan have to do with a surge in carrom board exports? A lot, especially if you are a small-time manufacturer in Meerut.

What does Ramzan have to do with a surge in carrom board exports? A lot, especially if you are a small-time manufacturer in Meerut. 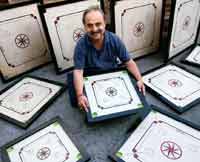 Tucked away in an old locality of Meerut, 65 km from Delhi, at 3Ace International, a group of 30 workers is slogging it out round-the-clock cutting, dyeing, polishing and finishing the wooden boards to perfection. However, the 27-year-old proprietor of the unit Sachin Katiyar is a worried man. It’s already the beginning of September and there’s no way he can meet the export orders for 21,000 units of these boards—there’s not enough wood. A two-year-old entrant into the business, he is dazed by the sudden spurt in demand for his product. Katiyar, it seems, is still learning the rules of the game. The veteran players in the business call it an annual phenomenon with an unexpected connection.

This unmatched frenzy at Meerut, a sports goods manufacturing hub of India, is triggered by the preparations for the Holy month of Ramzan in the Gulf countries. Sales of carrom boards in countries such as Saudi Arabia, UAE, Kuwait, and Bahrain increase by almost 50 per cent in the month of Ramzan, the fasting period that culminates in Id-Ul-Fitr, the biggest festival for Muslims. “During this period, the timing of the offices changes in the Gulf countries. People work from 9 in the evening till 4:30 in the morning and keep their shops closed during the daytime. Since playing cards is considered haram (profane), people prefer to play carrom that is considered a great leisure activity for the entire family,” says Anil Mahajan, Director, Himco International, an export unit based in Meerut. 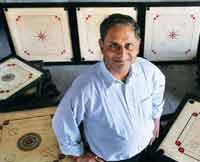 Anil Mahajan is one of the 300-odd manufacturers of carrom boards, bulk of whose business happens two months preceding Ramzan. For the minuscule Rs 30-crore industry, three-fourths of the business is generated by the Gulf countries. “While carrom boards are exported all through the year, the order books swell in the month preceding Ramzan when bulk orders from the Gulf countries start coming. All the orders are dispatched 15 days prior to Ramzan,” he adds.

Traditionally as well, Arab countries account for a large chunk of the total carrom board exports from India. Says Kuldip Mahajan, Proprietor, Hind Sports, a manufacturer with more than five decades of experience in carrom board making: “This is both because of the huge numbers of expatriates from South Asia diaspora such as India, Pakistan, Bangladesh, Nepal and Sri Lanka there, and also because of the increasing local market for the product.” Mahajan exported over 6,000 units of carrom boards before Ramzan this year as against an average of 4,000 units in the rest of the months.

So crucial is the Ramzan period for these players that certain bigger manufacturers continue to make carrom boards throughout the entire year, store them and do the finishing at the time of Ramzan for the export market.