Home
Business Today
BACK OF THE BOOK
October 7, 2007
Story

The all new lotus notes

People who have used lotus notes will testify that the user experience on older versions of the software could be extremely frustrating. As an e-mail, contacts and calendaring tool, not only was it difficult to use but worse still, it looked ugly.

People who have used lotus notes will testify that the user experience on older versions of the software could be extremely frustrating. As an e-mail, contacts and calendaring tool, not only was it difficult to use but worse still, it looked ugly. That made moving to Microsoft Outlook, any version of it, feel like bliss.

But Sandesh Bhat, Director (Design Technology Innovation), IBM, is trying to change that impression with the latest version of Notes, the Notes 8. And after seeing the changes that IBM has put in place in this new version, you appreciate the effort that has gone into it. The new Notes is based on the Eclipse Rich Client Platform (RCP) Java framework, which means that it can run on any operating system that supports a Java VM. Bhat demonstrated versions of Notes 8 on Windows, Mac OS X and Suse Linux, all looking exactly the same.

Better still, IBM has incorporated, among other things, a productivity suite into Notes 8. The idea is that users of the organisational tool will rarely need to leave the Notes framework—even browser support is built into the suite.

Bhat claims that IBM went out and listened to its customers while designing Notes and the new version reflects several of those suggestions, such as a Message Recall function that allows you to recall a message if you have a change of heart or the message isn’t relevant anymore. 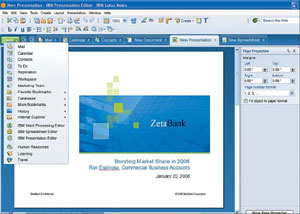 Crucially, the new version of Notes will make it easier than ever before for customers to deploy their own applications with relative ease.At the same time, it also makes life easier for the people who use it—allowing users to actually merge their online personal calendars with their work calendars to maintain a composite calendar.

Notes 8 may not look as good as the current version of Microsoft Office, but for an organisation debating whether to switch operating systems, features like the integrated productivity suite can be clinchers.

However, like many other pieces of software, the Notes desktop client isn’t light and requires a decently specced machine to run it. Bhat claims that Notes runs fine on machines with 1 gigabyte of memory and that IBM had tested it on machines with 512 megabytes; but given its tremendous flexibility and ability to do different things all at once, a more powerful machine will be a better choice.

On the whole, Notes 8 is a great improvement, especially on the usability front, and while its customers are offices and not individuals, if your organisation is using an older version of Notes, this may be just what you’re looking for.

The sound of youth