Home
Business Today
BACK OF THE BOOK
March 23, 2008
Story

The shape of future

The entry of new players is changing the rules of the game for construction industry workers. 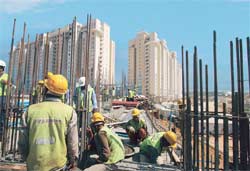 Labourers at the site of DLF laing O' Rourke project
Tom Young is a British expat who has supervised and managed construction projects all over the world, from the sandy plains of Arabia to the cold climes of Northern Europe, yet the dust of Gurgaon gets to him like no other place. But, Young, Head of Residential Construction, DLF Laing O’Rourke (DLOR), a joint venture between real estate major DLF and British construction firm Laing O’Rourke, dismisses the dust as a minor annoyance as his company changes the face of Indian infrastructure construction. Not by bringing revolutionary ideas into construction, even though DLOR is using some unique methods, but more so by the way the company treats its labourers.

Not only do the labourers at the construction site wear hard hats, construction shoes (thick soles with a steel tip to protect the toes) and high-visibility jackets, but the company also gives them safety training, subsidised food and most importantly provides them housing. About a couple of kilometres away from the construction site for DLF’s luxury ‘Magnolia’ apartments, in a gated site, row after row of buildings providing housing for construction labourers are situated. The facilities include proper sanitation, cooking areas as well. 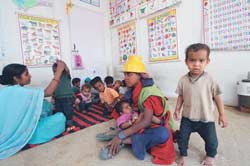 Camp care at DLOR construction site
Workers can stay in groups of between six and 10 in small rooms, around 100 square feet each. “We try to make sure only six people occupy a room, but sometimes people from the same village want to stay together,” Young says. The campsite, which also has around 50-odd workers’ families staying (women do not work at DLOR construction sites), has a small crèche-cum-playschool for children under five. The toilets are shared but are kept clean as are the drains by a housekeeping agency. There is also a playfield and every alternate week there are movie shows.

Even though the housing for these construction workers is free, there are strict rules as the ‘Camp Boss’ Gajan Singh Yadav explains. “We do not allow people to cook in their rooms, or have alcohol inside the camp. We search all labourers for alcohol every day and if our guards at the gate think the labourers are drunk, we don’t let them in until they sober up,” says Yadav.

DLOR is now building a school and a canteen for the labourers. “There is no separation in terms of ‘class’ at the camp, skilled and unskilled labourers stay together, but we would want them to gain qualifications and education. In Laing O’Rourke, we have enough examples of construction workers making it to management. We can do the same here,” Young says.

Tom Young of DLOR
The story is no different at DuPont’s Rs 100-crore Knowledge Centre, located in a 15-acre leased land facility at the ICICI Knowledge Park in Hyderabad. “We intend to bring about a change in the culture and mindset of those involved in construction,” says Homi Bhedwar, director of the centre. For this, he says, the company works very closely with its contractors (in this case with Indu Projects).

At the campsite, Indu Projects ensures some basics like availability of water, especially, drinking water, proper sanitation facilities like periodic pesticide treatment. Doctors visit the campsite at least once a week. For the preliminary schooling for children of construction labourers, Indu Projects has tied up with Dr Reddy’s Foundation.

Beginning soon, the facilities will include a protein-rich diet for the children. One unexpected but welcome outcome of the initiatives has been the reduction in cases of alcoholism among the workers thanks to the evening movie shows at some of the Indu Projects’ sites. And other than whatever is provided by the contractors, DuPont puts safety first. For instance, it demands one safety steward for every 50 workers, a weekly safety audit with the contractor, regular safety (committee) meetings, a tool box meeting (a meeting held before start of work and detailing things to be done).

In Kolkata, the UK-based REIT Asset Management, which manages real estate assets valued at over $6.8 billion (Rs 27,200 crore) globally, has teamed up with Eden Realty Ventures owned by NRI Indrajit De, to build at least two projects with a capital outlay of Rs 465 crore around Kolkata.

Here’s what 500-odd workers (the numbers are slated to go up to 1,000 shortly and eventually to 4,000-plus by the end of the year) are getting over and above their remuneration: Contractors’ All Risk Insurance Policy (which is in the joint name of the developer and contractor), Workers’ Compensation Insurance Policy, Third Party Insurance Policy.

Says De, Chairman of Eden Realty Ventures: “We take the issue of construction workers’ safety, security and compensation very seriously. We always use state-of-theart technology, most modern cranes and other equipment. Helmets, hard hats and special boots are a must and supervisors make sure that scaffolding is done properly,” adds De. Of course, DLOR, DuPont-Indu Projects and REIT-Eden Realty are not doing this for philanthropic reasons. DLOR’s Young explains that the company has similar policies for employees across the world.

“Cost is not a major issue, trust me it costs less for DLF (which provides the land for the site) to run the camp than they will make from one of these apartments”, Young states. DLF has already pre-sold all 600-odd apartments in the complex, which overlook the DLF golf course, starting at Rs 4.5 crore each. This is not an isolated case for DLOR. At each of its 26 construction sites across the country, labourers are provided housing, food and training. And with 14,000 labourers currently working on those projects that is no small feat.

“We today spend on an average around Rs 1,500 to Rs 1,600 per labourer per month towards better safety, accommodation, education to children, health and other amenities like water,” says Jacob Nixon, head, Urban Infrastructure, Indu Projects. “Our goal is zero (injuries),” says Bhedwar. And the company has pretty well managed being near that with almost no major incident at all so far. 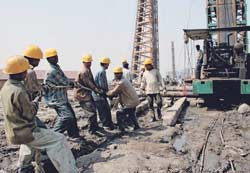 REIT-Eden project workers even get insurance policies
The DuPont Knowledge Centre in India achieved a safety milestone of delivering two million safe manhours of construction mid-February this year. The team incorporated DuPont safety standards with local standards and educated more than 1,300 contractors who are part of the project. Says Bhedwar: “Our next target is three million safe man-hours of construction, hopefully by the end of the project that is by April-May.” The project is expected to get ready for occupation by May 31, 2008, and by then, the total cost is expected to be Rs 200 crore. Bhedwar feels the orientation and training, which are aimed at bringing about a change in mindset, could be things that go beyond the project and stay longer with the construction workers even in their future projects.

Young contends that in a volatile labour market, practices like this help retain labour and keep the workforce motivated and happy. “Yes, things are not yet perfect, there is still a long way to go with worker training and getting people to understand the merits of safety. But we have made a start and I believe that because of what we are doing, other companies will have to start offering these facilities to their labourers also.”