Home
Business Today
BACK OF THE BOOK
April 5, 2009
Story

Ragpicking is the last area a corporate would want to foray into. But for ITC, which had in the past entered unorganised businesses such as manufacturing match sticks and incense sticks, it is a potential gold mine. Its Wealth Out of Waste programme shows how a simple habit change can significantly benefit the company, the society and the country. N. Madhavan reports. 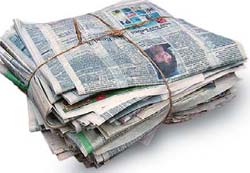 Ragpicking, one would assume, is the last area a corporate would want to foray into. But for ITC, which had in the past entered unorganised businesses such as manufacturing match sticks and incense sticks, it is a potential gold mine. Consider this: for 80 per cent of the 630 paper mills in India, waste paper is a key raw material. They import around 4.6 million tonne from Europe and the US every year at a cost of $750 million (Rs 3,750 crore). But what turns this perfectly normal business action into a colossal waste is the fact that of the 8.5 million tonne of paper consumed every year in the country, only 1.4 million tonne get recycled back to the industry. Over 7 million tonne of waste paper, almost 1.5 times of what is imported, find their way into landfills and is permanently lost.

“We don’t believe in at source segregation of recyclable waste. Every type of waste—be it paper, metal, plastics, food and other wet contaminants—is put in the same dustbin and is rendered un-recyclable. As a result, waste paper recovery level in India is a poor 14 per cent compared to 70 per cent in Europe and the US. The same can be said about other waste such as metals and plastics,’’ says Jogarao Bhamidipati, Vice President, ITC, Paperboards and Specialty Papers Division, and Head, Wealth out of Waste (WOW) Initiative. 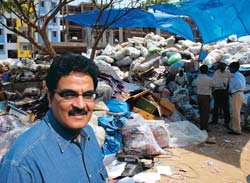 ITC launched WOW in April 2007 to inculcate the habit of segregating waste and increasing the level of recycling garbage. “WOW is a perfect example of ITC’s triple bottom line approach of economic viability, social responsibility and environmental impact,’’ says Bhamidipati. The Initiative works like this: ITC provides every household in a chosen locality with a bag to put all the solid waste, including paper, metal and plastics. The kitchen and other wet waste are kept separately for disposal by municipal authorities. Once in 10-15 days, WOW team visit the households and collect the recyclable waste after paying Rs 4 per kg of paper and Rs 2 per kg for plastics and metals. The garbage so collected is then transported to the junkyard where it is segregated and sent for re-use. The paper waste is baled and sent to ITC’s reprocessing plants.

What began as a pilot project in Hyderabad less than two years ago has now spread to 15 municipalities in Andhra Pradesh. In Tamil Nadu, a pilot project is on in Coimbatore involving 5,000 houses. In Bangalore, 30 IT companies are a part in this initiative.

Waste collection has touched 600 tonne per month and 165 employees are involved with the initiative. ITC, which has begun to partner with Ramky Enviro Engineers— India’s largest waste management company—for the initiative is targeting collection of 2,000 tonne in 2009-10. “The response from people to this initiative has been enthusiastic wherever we have launched it,’’ says Bhamidipati. It has also caught the attention of policy makers. Andhra Pradesh government wants the company to roll out the programme across the state. Chennai Corporation has asked the company to commence operations in two localities in the city. Ministry of Urban Development wants ITC to replicate WOW in 52 municipalities across the country for which it has provided funds for solid waste management under Jawaharlal Nehru National Urban Renewal Mission. The company, for its part, plans to scale up its presence in Andhra Pradesh to 52 municipalities, -expand operations in Coimbatore and start pilot projects in Chennai, Madurai, Thiruvananthapuram and Kochi in 2009-10.

The interest the project has generated is understandable considering that it benefits all the stakeholders involved and not to mention, the environment. “No one throws waste outside, not even a bit of paper. Housewives are happy that they get money for the waste they normally throw away. The streets are also clean. We want to extend WOW to cover the entire city,” says R.R. Balasundaram, Honorary Secretary, Residents Awareness Association of Coimbatore, an NGO run by citizens of Coimbatore to bring awareness among the city’s residents about comfortable living.

On an average, 30 per cent of the waste generated—cities do generate large quantum of waste every day (see Wasted Waste)—is recyclable. Implementing WOW means a 30 per cent reduction in waste handling and related costs. Hyderabad municipality, for instance, spends Rs 10 crore every month for handling waste. A 30 per cent reduction in garbage volume leads to Rs 3 crore saving per month or Rs 36 crore a year. So municipalities are naturally interested. There are other benefits as well. “In most cities, landfills are fast filling up and identifying a new site is difficult due to NIMBY (not in my backyard) syndrome. A 30 per cent reduction in garbage would mean a longer life for existing landfills,” says Rajesh Lakhoni, Commissioner, Chennai Corporation. 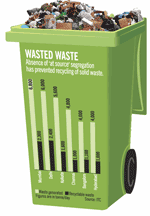 Click here to Enlarge
Segregation and recycling of waste (especially plastic) has prevented drains from getting choked. This has led to better sanitation and fewer diseases. “Within two months of implementation of WOW in Eluru, Andhra Pradesh, we noticed a significant drop in communicable diseases,” says Khader Saheb, former Commissioner, Eluru Municipal Corporation. He has recently joined the WOW project in Andhra Pradesh.

For ITC, the waste paper collected by WOW is a crucial raw material— Rs 1,000 per tonne cheaper. The environment is the biggest beneficiary. Every tonne of recycled paper prevents 17 trees from being felled and saves 7,000 gallons of water. This means more greenery and improved rainfall. Similarly, production of plastics, steel, aluminium and copper substantially impacts the natural resources.

If at all someone has been hurt by WOW, it is the ragpickers and scrap dealers. But for this, too, there is a way out. Every town of 50,000 households requires employment of 50 indirect labours under WOW. ITC has offered them the employment, thus ending whatever little resistance the project triggered initially.

Considering the benefits WOW generates, ITC is working with Indian Paper Mills Association (IPMA) to get other paper mills to take up this initiative. “Our aim is to attain waste paper recovery level of 70 per cent as in developed countries in next 10-15 years,” says Bhamidipati. Time is, indeed, running out. India’s paper consumption is estimated at 26 million tonne (currently 8.5 million tonne) by 2025.

To meet this demand, at existing waste paper recovery rates, more than 300 million trees need to be cut and additional 100 billion gallons of water will have to be consumed. The consequences of which could well be imagined.