Home
Business Today
BACK OF THE BOOK
Nov 4, 2007
Story The Business Today-Aditya Birla Group Acumen is back with its sixth edition. With the first leg of the annual competition getting underway, it’s time again to gear up for the intense battle of wits, strategy and reflex. This edition’s action started with the North Zone leg of Acumen 2007 hosted by Indian Institute of Foreign Trade (IIFT), Delhi, on October 5 and 6. Proving that the competitive spirit of India Inc.’s budding managers is in fine fettle, the quiz teams as well as the debate teams faced each other in a rigorous contest.

The stage is now set for the West, South and East zone legs of the competition. The cities of Mumbai, Bangalore and Kolkata will play host to the event on October 26-27, November 3-4, and November 30-December 1 respectively. The grand finale is slated for December 15 in Mumbai. Like previous years, this year’s Acumen host is inimitable Harsha Bhogle, who true to his style was ready with googlies for the participants and the audience alike. For the north zone preliminaries, 45 quiz teams (representing as many B-schools in the northern region) and 33 debate teams were all enthusiasm on the first day of the event. The elimination was fast and furious, finally leading to four teams each in debate quiz, and alumni quiz competitions. “On campus after campus for the sixth consecutive year now, Acumen has acquired the status of a national brand. It has its own buzz-generating capacity, and even its own set of devotees,” says Raktim Das, General Manager-Marketing, Business Division, India Today Group.

The following day, the first debate semi-final was held between the teams of IIFT and Faculty of Management Studies (FMS), Delhi. The topic: ‘It’s not innovation that matters, but execution’. IIFT prevailed in the contest. For the second set of semi-finalists, the topic was an intriguing: ‘The Sensex is a misleading indicator of the Indian economy’. Indian Institute of Planning and Management (IIPM), Delhi, won over IMT Ghaziabad in the keenly-contested debate.

It was now time for the debate final between hosts IIFT, Delhi and IIPM, Delhi on the topic ‘Manufacturing is the real measure of economy, not services’. The IIFT team of Arka Bhattacharya and Anchal Gupta, speaking against the motion, continued its brilliant run, winning over Uday Shankar and Alekh Chaterjee. The winning team highlighted the contribution of services to the GDP and how services sector is spurring manufacturing. The rival team’s argument that manufacturing has larger employment potential and therefore should be considered a better measure of the economy than services didn’t quite impress the judges. 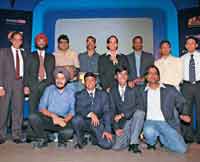 The four teams in the quiz final that contested keenly for the top honours included IIFT—Delhi, Amity Business School-Noida, Management Development Institute-Gurgaon, and IMT Ghaziabad. The questions were fun; though unmistakably challenging. Sample this. Which ad has the tag line: Play is the nutrition of the soul? (Answer: Lego); which game resulted in sale of pencils increasing sevenfold? (Sudoku); what does Cognac XO on the bottle of Cognac mean? (XO stands for extra old, meaning the brandy is stored at least six years in a cask); what is common in the taxation systems of Mumbai and an impoverished sub-Saharan African country? (Octroi). After seven arduous rounds, IMT, Ghaziabad emerged the winner.

The prize sponsors for the event were Idea Cellular, and Harvard Business Review (all India prize sponsor). Apart from Business Today and Aditya Birla Group, other sponsors and partners of the event were TravelGuru (prize sponsors for the finals), Headlines Today (TV partner), Fever 104 FM (radio partner), Exchange4Media.com (media partner), PaGalguy.com (online media partner) and IIFT (B-school partner). After the exhilarating start at Delhi, it's time to gear up for the next regional round of the mega-event in Mumbai on October 26-27.