Laura Perkin, 43, had her first brush with entrepreneurship at the age of nine, when she used all of her mother’s balls of yarn to design and sell pompoms to kids in her neighbourhood. She proceeded to split the proceeds with two friends to whom she had outsourced the weaving of these pom-poms, while she focussed on design and distribution.

Laura Perkin makes a point to a group of students
She ran this “venture” until, inevitably, her raw material (her mother’s yarn) ran out and her business ran aground. The seeds of entrepreneurship were, however, sown for Perkin, who, over the next couple of decades, dabbled in several enterprises, ranging from selling insurance in small town America to setting up banks and healthcare companies.

Perkin, who grew up in Hong Kong (and speaks fluent Cantonese), moved to the US to chase her entrepreneurial dreams in the mid ’70s. She finally reached India for a brief stint at Ashoka Foundation in 1999, before moving to the National Entrepreneurship Network (NEN), a not-for-profit initiative started by the Bangalorebased Wadhwani Foundation in 2002. For a country in which a stable job (and salary) has traditionally been given priority, NEN and its Executive Director Perkin had their task cut out over the past five years.

NEN began with six colleges (winners of a competition in 2002 called Lock Stock and Trade) in Mumbai and spent the next few years building its own team, bank of students’ cells and entrepreneur-advisors as it sought to effect a change in the mindsets of students. “Five years ago, when we launched NEN, there was a clear need to accelerate entrepreneurship in India, especially at the college and university levels,” says Romesh Wadhwani, serial entrepreneur, whose eponymous foundation runs this network. The original goal for NEN was to launch thousands of first-generation entrepreneurs over 10 years, creating 100,000 high quality jobs and accelerating economic development in India. “Five years on, we have come a long way and made a big difference. Today, there are nearly 400 colleges and universities with entrepreneurship programmes and over 50,000 college students are now actively engaged with us. Then, there is a network of resources that can be accessed and used by any NEN member at no cost,” he adds. 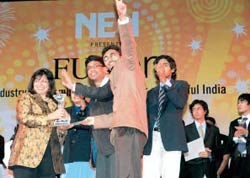 Biocon’s Mazumdar-Shaw (L) seen with EWeek winners
In February this year, some 250,000 students across 360 educational institutes took part in NEN EWeek (entrepreneurship week). And over the course of the event, they took part in group discussions and met investors and successful entrepreneurs. They also spent three days on a “Rs 50” game, where they had to devise out-of-the-box businesses (with an investment of Rs 50) in three days and prove their viability. These businesses ranged from dog washing to salsa classes, printed T-shirts and costume jewellery.

At Bangalore’s Mount Carmel College, students baked a cake for Rs 50 and sold one slice of that cake for Rs 20 and used the surplus to bake more products and make a handsome profit—all this to eventually learn being well-rounded entrepreneurs.

Besides nurturing first-time entrepreneurs, the next step for NEN is to play a broader role in building an entrepreneurship ecosystem in the country. “We need to encourage college students to consider a future in start-ups—not just in founding companies, but working in these start-ups and understanding the nuances of working with them,” says Biocon founder and CMD Kiran Mazumdar-Shaw, a strong votary of NEN’s activities and an advisor to the network. Wadhwani also makes a social case for NEN’s growth that goes beyond the purely economic rationale for it. “I’m a living proof of the value that entrepreneurs can create for society. I also believe that each of us, who has been fortunate enough to succeed at this level, has an obligation to give something back to society,” Wadhwani explains.

Alok Mittal
Over the past five years, NEN’s extensive network has been leveraged by several students to further their fledgling businesses. For students and wannabe entrepreneurs, incubation can otherwise be a strong magnet to work with programmes such as NEN, since finding space and funding for their projects can be next to impossible. At the same time, NEN has snagged the attention of a raft of high-profile executives like Naina Lal Kidwai, Country Head of HSBC, Harsh Mariwala of Marico and Arun Seth, Country Head of BT India, as well as top notch venture capitalists like Randy Komisar, Partner, Kleiner Perkins Caufield & Byers and Consulting Associate Professor, Stanford Technology Ventures Programme, among others, and investors such as the Indian Angel Network to act as hands-on advisors. “There is an interest in entrepreneurship not just among eager college students, but also at a senior management level,” says Kanwaljit Singh, Partner at Helion Ventures, and advisor to NEN.

And there are examples galore. Hari Rastogi used the network’s reach to get himself into the incubation centre at IIT Kanpur when he was in his eighth semester at Bangalore’s MVJ College of Engineering. He started Excelan Consultancy, a financial services company offering financial planning solutions and claims to have tied up with the likes of IT giant Capgemini to offer its employees financial planning solutioms.

Rastogi, who underwent a three-month World Bank-assisted programme at Vellore Institute of Technology on entreprenuership and a one-week refresher course at IIT Kanpur, says his company offers solutions across a range of insurance and multual fund companies and earns revenues from these companies for hawking their products. “I wanted to be an entrepreneur since I was in high school and NEN gave me the platform to follow this path rather than force myself into a dead-end job,” says Rastogi. Elsewhere, Ankur Gattani, a graduate from IIT Bombay and IIM Calcutta, has set up Onelife Knowledge Services and the first product, lifeinlines.com (LiL), was started a year ago. “Lifeinlines is a personal archive of your life. It integrates multiple technologies to make it simpler for people to record moments and instances from their lives that touch them— something like an ongoing autobiography, as life happens. You could use the web, e-mail, instant messengers, SMS or even a phone call to record moments to your LiL account and store them privately or to share with selected people,” he says.

Gattani hopes to earn revenues from online advertising, by monetising his user base and is also looking at other revenue streams including custom application development for corporates.

Entrepreneurs associated with NEN point out that unlike in the West, the support ecosystem in India is a work in progress. “There are 30,000 angel investments every month in the US and angel funding in universities is well-established. We also don’t have any ‘war stories’ (read: comebacks after failures) from our entrepreneurs,” complains Raman Roy, serial entrepreneur, VC and Founder-CEO of Quattro BPO and an industry veteran.

Romesh Wadhwani
Others such as Alok Mittal, MD, Canaan Partners India (and founder of jobsahead.com), say Indian universities are beginning to realise the value of nurturing entrepreneurs. “We need to recognise that the market in India is different from that in the US and rest of the West. So, programmes here need to be tailored to local conditions,” he contends.

As NEN gains momentum, it needs to consider ways of generating its own funds and literally cut its umbilical ties with the Wadhwani Foundation. While Wadhwani says he is in this journey for the long term, seasoned advisor-entrepreneurs feel NEN needs to establish its own identity independent of Wadhwani Foundation. “Now, the challenge (for NEN) is to scale up to cover more institutes and eventually make it self-sustaining by generating its own funds,” says Mazumdar-Shaw. NEN faces other challenges too; seasoned entrepreneurs say that the network needs to avoid the pitfalls of other start-up movements and retain its free-flowing set-up, rather than get into an overly structured business framework, to ensure its longevity.