A Ray within reach

Blu-ray players have been around for a few years, but their prices and lack of content have not made them so popular in India. Still we could be on the verge of a Blu-ray wave, thanks to cheaper video players, availability of more titles as well as the popularity of high-definition players. With more people switching over to larger and smarter televisions, the chances are they will look at Blu-ray players to sustain their content needs. Here is a look at the best bargain in the Blu-ray market.

If affordability is the only factor, then this player from Samsung wins hands down. But then the rest of the features are pretty basic-also no Internet connectivity here. The only connectivity is the Wi-Fi which lets you share content seamlessly between DLNA certified devices. The pictures in Full HD resolution. This is complemented by Dolby TRUE HD Digital Plus sound. It also comes with Anynet+, an AV network system to automatically control Samsung audio-video (AV) devices with a single remote. However, the device struggles to play some of the video formats.

Along with Full HD playback, the S380 comes with BRAVIA Internet Video streaming and is Wireless LAN ready. It has Dolby TrueHD & DTS-HD Master Audio internal decoding and bitstream output via HDMI. If you have BD-LIVE compatible discs, the player will connect to the Net to access information from movieIQ. The Quick Network Update feature will periodically notify you of available firmware downloads so you can keep your player updated. You cn use a "Media Remote" Mobile App which works on iOS and Android devices.

In our books this Blu-ray player has the best VFM. This Philips provides Full HD playback at 24 fps reproducing cinema-like images. It upscales DVD video to 1080p via HDMI for near-HD images and comes with subtitle shift for widescreen playback so that the text doesn't go out of the screen. The player can be connected to the Net to play YouTube videos on a big-screen TV. It has Dolby TrueHD and DTS-HD MA surround sound and plays files from a USB flash/hard disk drive and features BD-Live. 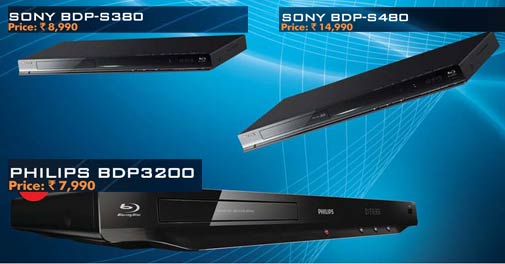 In a price-sensitive market like ours, this Philips player stands out with its very affordable price tag as well as its array of excellent features. Along with the Blu-ray 3D Disc playback, this device comes armed with the Net TV feature which facilitates users' access to movies, pictures, infotainment and other online contents, simply by connecting the player to a wired or wireless Net connection. It also has a DLNA Network Link to enable loading of photos and videos from a PC as well as EasyLink to control all HDMI CEC devices via a single remote.

With LG leading the pack of 3D televisions, it is only natural that the company has a very decent 3D player too. The BD670 tries to be as smart as the televisions it is supposed to cater to. While it lets users enjoy Full HD playback of 3D videos, there is Internet access through Wi-Fi to stream multimedia content. The BD670 also sports DLNA to enable sharing of music, movies and photos stored in other compatible devices. It can also play a host of video formats while also providing access to content providers like Picasa, Accu weather, YouTube and Google Maps using its easy interface.

The S480 can play Full HD 3D Blu-ray Disc movies while also connecting to the internet and streaming music and videos from YouTube. While the picture resolution is Full HD, there is a built-in web browser with Facebook, just in case you need to add some smartness to your TV. Like other Sony Blu-ray players, there is a Media Remote app which lets you control the device using a smartphone. The device comes with unlimited access to Qriocity Music and video in many countries, but the service is not available in India. The DTS-HD Master Audio Decoding and Dolby True HD decoding ensure than the sound is the best possible for home entertainment.