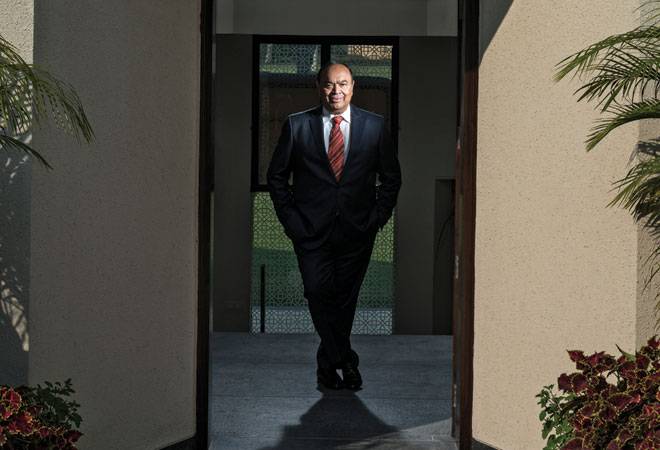 In his free time, 62-year-old Nirmal Minda, Chairman and Managing Director of UNO Minda Group, one of India's leading automobile component makers, loves to play cards with family and friends. The game of hearts, diamonds, clubs and spades throws up countless permutations and combinations. Luck plays a role in deciding the winner. So does risk taking.

In business, though, Minda does not leave anything to chance, and has built an empire that tops Rs 8,000 crore revenue by taking a series of calculated risks, making UNO Minda an outperformer in a sector that is facing its worst downturn ever.

The group's flagship company, Minda Industries, has increased its turnover at an average of 13 per cent per year over the last three years with a corresponding 22.3 per cent annual growth in net profit during the period. The domestic passenger and two-wheeler industry, to which it supplies components, has grown revenue and profit at 6.6 per cent and 8.9 per cent CAGR, respectively, for the last three years. The stellar performance has made Nirmal Minda BT's Best CEO in the small companies category (those with a turnover of Rs 1,000-10,000 crore).

"The key has been to remain focused in my business. It's in our (Indian) culture to lose focus. We look here and there a little too much," he says. "Very often, we have a tendency to look at the short term and ignore long-term implications. Then, we have a tendency to invest the money that we have earned not in furthering the business itself but in other businesses like real estate. So, the money required for technology and R&D in our core business is spent elsewhere. When that happens, my attention also gets diverted. The focus gets shifted. Obviously, I will then be more concerned about businesses where fresh capital has been spent. We get distracted as there is a need to break even there." It is not that he has not committed mistakes, but in his own words, he has been lucky enough to realise them before any damage. "I am also a product of this culture. Even I have been distracted. We also spent on real estate and solar. About five-seven years ago, everybody was going crazy over solar, so we thought let's also get in," he says. "So, we also invested, but saw it wasn't our cup of tea and exited immediately. It was good that we didn't stick around for long. We invested in real estate too. Even that hasn't multiplied. We are lucky that whatever we invested is still at the same level. No profit, no loss. So, I have forgotten about it. But then, about five years ago, I swore I will not do business in anything else but automobiles."

This focus has paid dividends at a time when most others have faltered. With its origin as a trading firm founded by his father S.L. Minda that sold ammeters (used to measure current in a circuit) to Royal Enfield in 1958, the group today has 62 factories with over 21,000 employees and workers spread over seven countries and 40 companies. It has tie-ups with 15 global tech players.

What has also helped the group is Minda's ability to predict disruptions in the sector and how they will impact his business. His instinct has not only enabled the company to maintain its hold in the market but also venture into areas of new growth. Towards the fag end of last year, for example, he acquired the sensor business of US-based Sensata Technologies. The increased use of sensors as the industry shifts from BS IV to BS VI emission norms from April next year has created fresh demand for Minda.

"New segments have brought growth, like sensors that are required for BS IV vehicles, apart from other normal segments like switches, LED lights and alloy wheels. Earlier, alloy wheels used to be 20 per cent of the industry, now they are 40 per cent," he says. "(But) this slowdown is definitely a concern. I have not seen anything like this in 45 years. We took 20 austerity measures in January - stopped overtime, reduced travelling, consolidated material costs, slowed down the recruitment process. Then some more measures were taken at the end of September when we put a freeze on recruitment. We are not even filling vacant posts. When an industry declines 20-25 per cent, try as hard as you can, you cannot be completely insulated."

For the success Minda has achieved, it is strange that he was forced into the business and developed the passion for automobiles on the job. "I joined this sector in 1974 when I was studying. My father was very ill and we had just parted ways with our partners. So, it was a compulsion, and not a choice," he says. "My interest was always in business but not necessarily this sector. This business is tough. There is a lot of hard work. A lot of companies had shut down at that time. Often, I used to think of easy options like trading in grain or rice or sugar, where you can make money easily and quickly. But in commodity trading, you make money fast, and lose it fast as well. I thought about it as some relatives were in it but decided not to go ahead as it was not sustainable in the long run. I may have to work hard in this business but it is sustainable. Once you have put in the hard yards, it is smooth. All we need is to maintain quality and timelines and customer confidence is there."

Minda's father recovered but "by then I was hooked. The success we got generated an interest. We saw a lot of ups and downs, particularly in the area of technology at the start, but managed it well."

Looking at the future, Minda is consolidating all his companies to make the balance sheet stronger and give investors more confidence. He also wants to expand his export business so that by 2024/25, a third of revenues come from outside India, from just 10 per cent today.

An avid fan of old Bollywood classics, especially those of actor Rajkumar, Minda, who counts Switzerland and London as two of his favourite vacation destinations, says his group's global footprint will increase with help from relationships he has developed with global MNCs in India. "We supply to a number of global companies operating in India. We want to start supplying parts to them for their overseas operations as well. There is good potential for expansion there," he adds. "We have bought a plant in Mexico, and already have a plant in Spain. We are only selling horns from there. We can expand our product portfolio there too."

Does he worry about electrification of mobility disrupting his business? "Not one bit. We have done an analysis. Out of our 28 product lines, only one, air filter (engine), will be of no use in an electric vehicle (EV). But by 2030, even if we believe that 30 per cent of new cars sold will be electric, the rest will still have internal combustion engines. So, we have nothing to worry about," he says. "On the other hand, EVs will open up new avenues too. Our R&D centres are already working on that." He did not elaborate. Like a seasoned player, he is keeping his cards close to the chest.