Buoyed by big deals and focus on digital, CP Gurnani is looking at industry-beating growth In April 2009, when the Mahindra group made headlines for acquiring the fraud-hit IT giant Satyam Computer Services, Anand Mahindra famously said, "I don't believe this is a sinking ship; no longer. This may not be a racing craft yet, but it is our task to make it one." The group chairman entrusted C.P. Gurnani (CP among his peers) with the arduous task. A decade later, Anand Mahindra is not telling us anything about the craft or its seaworthiness but thinks Gurnani is best placed to drive the company's growth. "I particularly admire his people skills, energy levels and unflinching customer focus. These qualities will help CP as he propels Tech Mahindra into the digital age, helping shape a sustainable digital world for all of us," he says.

The enormity of the task is reflected in Gurnani's daily schedule. He is up at five in the morning, travels 200 days a year to meet customers and partners and never fails to connect with his people. For a man who knows the families, hobbies and eating habits of more than 2,000 employees, it is only natural to give greater weightage to people-related matters during most of his conversation with Business Today. But the savvy leader is also candid when asked where the business is headed and ties it to the new-age digital transformation. "In the last three years, we have more than doubled our share of digital revenue - from 18 per cent to 40 per cent - and we aim to cross the 50 per cent mark in the next two to three years."

This desire to corner digital success is not unique, though. All IT exporters find it imperative to offer a broad set of digital solutions and services as their clients rethink strategies and remodel operations to stay competitive. But for Gurnani, however, a few things have already fallen in place. For instance, Tech Mahindra has managed to strike a few large deals. Its billion-dollar-plus contract with its largest customer AT&T was in the news in September this year. During the second-quarter earnings call of FY2019/20, Gurnani pointed out that the company "had a great record quarter for deal wins... We are also pleased to end H1 with the highest TCV (total contract value) across both enterprise and communications verticals. Our pipeline remains robust." (It is not clear how many of them would be billion-dollar contracts.) Besides, the company made four strategic acquisitions in 2019, the most recent being the $95 million all-cash deal to purchase the BORN Group. The New York-based digital content and production agency is expected to augment the company's digital offerings. 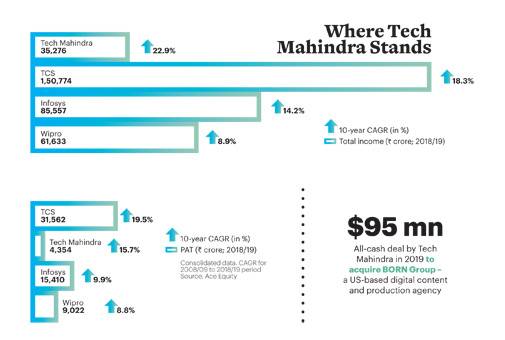 According to some analysts, what also stands out about the company's performance under Gurnani's watch (especially in the past three years, which we have considered for the Best Performing CEO Award) is its attempt to broadbase revenues beyond telecom. Sandip Agarwal, an analyst at Edelweiss, underlines a combination of initiatives that led to this transformation. First, he sees a clear focus to broadbase the revenue stream, which is good. "Take telecom. Its share would have been down by 5-7 per cent at the least, but other segments like enterprise gained. Plus, it seems to have done a lot of work on sales engine, which is showing in the deals. Other than AT&T, there are some bank deals on the enterprise side. Also, the company seems to have done better on consolidating the past deals with pain on account of some of them (like the hit on margins it took after the acqusition in 2014 of global network services company Lightbridge Communications Corporation, more often referred to as LCC) behind them." As for the road ahead, he says, "The highest ever deal wins with TCV of $1.5 billion and a healthy pipeline augur well for FY20. Also, the revival of the communication vertical and the ongoing steady growth in the enterprise space would drive better-than-expected revenue growth." This is despite some initial margin compression that is expected when companies begin ramping up or incurring transition costs associated with large deals like the AT&T deal for the company.

Gurnani, who considers telecom to be a horizontal (as it cuts across various domains) rather than vertical play (which is a specific line of business), says that future growth drivers will be linked to 5G. "Our digital umbrella is huge, and we are targeting 50 per cent revenue from digital business by betting big on next-gen technologies such as 5G, blockchain, artificial intelligence (AI) and cybersecurity. These are early days to quantify categorically but what is more pertinent is to understand which part of Tech Mahindra will be impacted by 5G. Almost all existing and new accounts - definitely in the telecom space but also in the enterprise segment - will engage on 5G."

He elaborates further. "Currently, we are engaged in detailed boardroom discussions with top Indian telcos. Globally, we are working with several telecom companies across North America, the UK and Germany, as well as the APAC, the ANZ and North Asia regions, and helping them with 5G launch and digitisation programmes. We are striving towards a massive digital transformation and we have accomplished some notable 5G projects over the last 8-10 months." Some of these projects include partnerships to develop a cloud innovation laboratory, a next-gen (4G and 5G) software-defined network laboratory in Tokyo, a massive programme to digitise a company's telecom operations, delivering digital legacy systems and network function virtualisation.

Gurnani's dream initiative is TechMNxt. "It is our response to the future - a global programme designed to explore emerging technologies such as 5G, AI and AI-infused IoT solutions, robotic process automation, blockchain and cybersecurity. The underlying priority is the application of the trending technology to solve business problems of our customers."

Interestingly, about 21 per cent of the company's total revenue comes from its top five clients but Gurnani is unperturbed. "It is a badge of honour. It means they have trusted us not for a year or two but over 10 years for delivering value, ensuring customer service excellence and fitting into their culture. I will try my level best to increase it as this means further deepening of partnership."

Ask him about his priority over the next few years, and he says, "It will always be people. But on the weighing scale, the best feedback you get is by looking at growth. I am looking at beating all industry averages in terms of growth, and I will be driving growth for the next three years."

Gurnani might have led the company on the right track and given it the momentum it needed after its integration with Satyam. His critics, however, think Tech Mahindra has miles to go before it can catch up with top players like TCS and Infosys in terms of size. Yet, Gurnani seems wanting to stay relentless and focused. A look at the numbers also corroborates it. The shape of things to come in the year ahead will tell us if the craft is ready to race at top speed.