The Best Companies to Work For survey: How we did it

Business Today's annual survey of The Best Companies to Work For will be released soon. We tried to capture not just the overall ranking of 25 companies and a sector ranking of 10 each for nine sectors but also the human resource facets of the Indian workplace.

Ten is a significant age for a survey. Business Today's annual exercise of finding The Best Companies to Work For turns 10 with this edition. After completely overhauling the methodology in the summer of 2009 to make it "by the employee and of the employee", we have tried to fine-tune it further this year. So, along with our survey and knowledge partners, we tried to capture not just the overall ranking of 25 companies and a sector ranking of 10 each for nine sectors but also the human resource facets of the Indian workplace.

Critical views from the employee universe, too, were captured in some detail. For instance: What factors do employees consider important in a workplace? What makes a company attractive to its employees? What demoralises them? What upsets them enough to make them contemplate a job change? Are they satisfied in their current role? If not, what can organisations do to address the factors they are dissatisfied with? Do they believe the senior management of the company adheres to ethical values? Read the answers elsewhere in this cover story package. 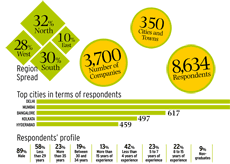 Click here to Enlarge
We partnered with Indicus Analytics for designing and conducting the survey. For helping us interpret the results, we partnered with PeopleStrong, an hr consultancy firm. First things first. The BT-Indicus Analytics-PeopleStrong survey is a perception-based one. What this means is that companies make their way into the survey simply because Indian workers want them to be there. Only employees - not students and those not working - were allowed to take part in the survey, which was conducted between August and October 2010, and was open for about 100 days. From 1,000 companies last year, the universe of this year's survey has expanded to 3,700 companies across 350 cities and towns. We reached out to a large employee base again this year (over 8,600 employees).

The Approach: An online survey allowed employees from different kinds of companies to participate and express their views. Online research is known to get more honest opinions. Mailers and other forms of communication were sent to randomly selected 1.5 million possible respondents, out of which about 70,000 (4.7 per cent) came to the survey page. Of these, 8,634 (12.3 per cent) respondents filled out the questionnaire. These respondents, 11 per cent of whom were women, were truly representative of the great Indian workplace (see graphics).

Click here to Enlarge
Data authenticity was ensured in two ways: a) the questionnaire design itself had built-in verifications that reject responses with contradictory/ incomplete information and; b) a verification backcheck of about 20 per cent of the accepted responses. Overall rejection was under 5 per cent. 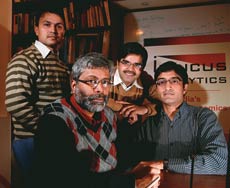 The Ranking: Survey respondents were asked to select and rank five companies, which in their opinion were the best to work for across industries or sectors. The respondents were then asked to rank these five companies on five parameters - career growth prospects, financial compensation, work-life balance, performance evaluation and other hr practices. The rankings for each of these parameters were restricted to three companies. The ranking of companies within a sector was restricted to people working in that specific industry. Again, each respondent was asked to rank the top five in that industry on each of the above-mentioned parameters with the ranking then whittled to three companies. The final list of best companies to work for overall and within each sector was based on rank scores. Following what statisticians call the 90 per cent rule, Rank 1 got a rank score of 100, Rank 2 received 90, Rank 3: 81, Rank 4: 73 and Rank 5 translated into a rank score of 66. The rank score for each company was aggregated across all respondents and the highest scorer was assigned an index score of 100. Other companies were ranked relatively based on their aggregate scores.

This method of scoring and indexing is considered robust in statistics. This is the second year of the survey in its new avatar. Our aim was to make the BT Best Companies to Work For study bigger and comprehensive.

To read more of the survey, subscribe to Busines TodayPrint copy.

Build HR strategy around the brand