THE TOILET ZONE
When once they grabbed a magazine when nature called, it seems that people these days run into the loo with a smartphone in hand. Yes, eerily enough, the toilet is a favoured texting zone for a lot of people. A survey of 1,000 people in London-earlier surveys also revealed the same results in Australia and the US-says that three quarters of the respondent said they had texted, emailed, played with apps or used the Internet while sitting on the toilet. Over 90 per cent of the respondents added that they had returned calls while relieving themselves, some even admitting that they had participated in conference calls. Oh, and by the way, among the toilet communicators, those who like to multi-task, by doing a number of things while using a range of apps, were likely to be Android owners. No-nonsense Blackberry users tended to take and make calls. Those with iPhones were more like to be playing with apps in the comfort station.

THE OLD ON TV, YOUNG ON A TABLET 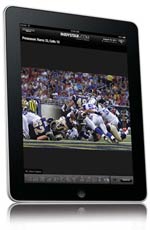 The Super Bowl broadcast on February 5 seemed to be in line with findings that the American youth watch programmes more on devices than on television. The Super Bowl between New York Giants and New England Patriots in Indianapolis had about 2.1 million users watching the live stream, while about 111.3 million people watched it on television. It was, by most calculations, the most watched sports event on US television. Most of those who watched the live stream on devices like the iPad and phones were young people.

$80: The amount Sony loses on every LCD television set it sells. The Japanese company has predicted losses of 2.2 billion Euros and exited from a LCD panel making joint venture with Samsung.

CAR THAT FOLDS UP
Foldable things are so easy to handle. But whoever thought that one day they would come up with an actual car that folds into a smaller avatar for parking? The Massachusetts Institute of Technology has produced one called the Hiriko and a consortium of technology companies in Spain plan to produce it. European Commission President José Manuel Durao Barroso said the car was an answer to the crisis of parking in Europe's congested urban centres. When parked, the rear wheels slide toward the front and the two-person passenger compartment tilts up and forward, making it less than two-thirds its original length. Three of these can fit into one normal parking spot. Passengers exit through a single clamshell door on the front of the vehicle. Hiriko has a 75-mile range and a top speed of 56 mph. Several websites reported that the car would be priced at $16,233.

The dismay with which mail users log on to find their inboxes crammed with spam might be a thing of the past soon. Majors like Google, Yahoo and Microsoft have come together to develop a technical specification called DMARC, which stands for "Domain-based Message Authentication, Reporting & Conformance". This will ease email-based abuse by solving a couple of long-standing operational, deployment and reporting issues related to email authentication protocols. By standardising such protocols, senders will experience consistent authentication results for their messages at AOL, Gmail, Hotmail, Yahoo! and any other email receiver implementing DMARC.

What has gaming to do with the horrors of burn injuries? While there seems to be no link, the University of Washington's VR Analgesia Research Center has established that playing a game called SnowWorld seems to bring relief for burn victims. SnowWorld is a first-person shooter game in which the patient uses snow balls to hit something while a soothing song plays in the background. Immersive gaming apparently helps patients take their mind off the pain. Time spent thinking about pain, which is an inextricable contributor to actual pain, dropped from 76 per cent without SnowWorld to 22 per cent with SnowWorld.

FROM THE MOUTH OF CEOS
Truth be told, there are a lot of lies bandied about in corporate rooms. And since company honchos cannot be subjected to Sach ka Saamna tests, scandals lie hidden until manual scrutiny detects the cooked books. Now researchers at Duke University and the University of Illinois say a technique called Layered Voice Analysis can expose the falsities emanating from the mouths of CEOs. They took cases of established fraud and listened to the CEOs talking. Helped by an Israeli company called Nemesysco, they noticed "vocal dissonance" in the CEOs' speeches at precisely the point when they were lying. Nemecysco's technology, which involves electronically analysing minute changes in people's voices to look for "tells" that they are lying, is aimed at law enforcement and airport security, but the tech could save billions in investor calls if it could pinpoint that a CEO isn't telling the truth.

$58 BILLION: The loss to the American economy due to piracy, according to the Motion Picture Association of America. The figure factors piracy's impact on related industries like florists, restaurants and trucking firms.

HARD WORK ON DISPLAY
Seems multitasking is the order of day. Else how do you explain the disparity between 179 million monitors sold last year against only 130 million desktop computers? Obviously people are using different monitors for different tasks at the same time. According to research firm IHS iSuppli, people also prefer bigger monitor screens-21 inches-up from 18 inches five years ago. Imagine what you would do with 36 megapixels on a camera sensor! With the unveiling of the highly anticipated D800 HD by Nikon, photographers are already anticipating what they can achieve with Nikon's highest rated sensor to date. Nikon itself says the camera affords flexibility and astonishing image quality "whether shooting high fashion, weddings or multimedia content". The Nikon D800 has an FX-format CMOS sensor, a 91,000-pixel RGB Matrix Metering System, Advanced Scene Recognition System and many other intuitive features such as full manual control, uncompressed HDMI output, and incredible low-light video capability. The new devices is driven by Nikon's latest EXPEED 3 image processing engine.

An iPad App for David Cameron