Talking risk
Smartphone owners beware. Experts have found out how cyber attacks on computers can now be replicated on smartphones. Former McAfee man George Kurtz and researcher Dmitri Alperwitch demonstrated recently how text messages can be sent with coded programs that take over the phone. Hackers could send a text message purportedly from service providers asking users to click on a link if they did not want their accounts cancelled. Doing that would embed the program in the phone innards and transfer information to the hacker. Now don't say you weren't warned.

$200 BILLION is the volume of business transacted online in the US in 2011. This constitutes around 9 per cent of all retail trade in the country.

Robot racer
Okay, so everyone knows the cheetah is the fastest land animal over a short distance. Is it possible that natural DNA has infected a mechanical cheetah too? "Cheetah" created by Boston Dynamics set the record for the fastest robots at Massachussets with a speed of 29 kmph. Cheetah, the four legged bot, set the pace on the treadmill. The earlier record of 21 kmph was set in 1989 by MIT's two-legged robot.

Banking on tech
What can be as old world as writing out a bank cheque and signing it with a flourish? But the bytes are winning once again. British researchers have come up with an electronic cheque. It looks much like the ordinary paper slip, except that the pen is a digital device with a camera that records all strokes against millions of tiny dots on the cheques surface. The pen sends the details to the bank via wireless link. The security feature of having the cheque and pen work only on the customer's own computer deters those who may steal them. It is modern, cheap, electronic and yet a physical paper-based system. Best of both the world, what say!

Intel inside, outside, everywhere

This is what Intel's dream world looks like: You are watching a video on the smartphone, the film shifts to the television as you enter your home and then the same is on your car media player when you step out again, all seamlessly. Well, it will need a lot of technology and analytics and, of course, Intel architecture, but that is what the world's leading chip maker is striving for. "We know technologies that are going to deliver the next level of user experience is what is going to succeed," says Intel India president Dr Praveen Vishakantaiah. "In fact, all future innovations will be user-experiencedriven and not technology-driven like before. So, our big focus is on taking the user experience to the next level." Intel will soon be seen in a variety of devices; even some not traditionally associated with the company, like settop-boxes-all this in a bid to ensure continuity for consumers. There are 432 million regular users of Facebook as of now. Of this, 58 million exclusively sign in through a mobile device and not on a computer. This revealing figure represents a 76 per cent jump in the number of people who use a mobile device to access Facebook over 2010.

$17 BILLION is what Japanese gadget makers expected to lose in 2011. Compare this to a $15 billion profit for South Korea's Samsung and $22 billion for Apple Inc.

Chip of the new block
If you call the latest processors fast what would you call a chip that can transfer the entire 235-terabyte data from the Library of the Congress in under 30 minutes? That is exactly what IBM's Holey Octochip is capable of doing. It can transmit and receive data at up to one terabit per second (1Tbps) at a time when the DDR3 interconnect between CPU and memory is ten times slower at around 100Gbps. But it could take up to two years before you see these chips in your computers. 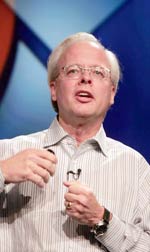 "People argue about 'are we in a post-PC world?'. Why are we arguing? Of course we are in a post-PC world. That doesn't mean the PC dies, that just means that the scenarios that we use them in, we stop referring to them as PCs, we refer to them as other things." - RAY OZZIE, the man who succeeded Bill Gates as Microsoft Corp's Tech Visionary, at a technology conference in Seattle on March 7, 2012.

Think like a man
Only human can think, machines belief. But tarry a bit. A Swedish team has created a personal computer that returned an IQ of 150. Using a mixture of mathematical logic and "human-like" thinking, the computer made by scientists at the University of Gothenburg attained the rank of "genius" on the IQ ranking system. The team's ultimate aim, the white coats explained, was to make a computer think like a man. As if they haven't half succeeded.