The MNC World Is Flat Too

Until the 1990s, multinational companies from the developed world were the ones with all the advantages. They lorded it over markets with their mammoth budgets, their vast reach and capacity to spend on research. Local companies were mostly restricted to either throwing price challenges at these MNCs or offering a local customisation the bigger companies did not care to pursue.

But much has changed since. Some erstwhile 'local companies' from the emerging markets have themselves turned MNCs. I remember once speaking to Praveen Jaipuriar, Dabur's Senior General Manager for Marketing, who had this to say: "We know if we do not have a certain capability, we can acquire it or even pay and get the best in the field to do the research for us." It sums up the approach of the emerging market MNCs. That is not all. These emerging giants are also swooping down to buy companies in other countries.

They are making many strategic moves while competing in a global setting. Most of them, for instance, are aware the advantage in pricing they enjoyed is now getting constrained. Only a combination of initiatives welded seamlessly together will keep them flourishing. "Today the foreign players can match and compete (with us) on any parameter," says Parag Desai, Executive Director of Gujarat Tea Processors and Packers - owner of the Wagh Bakri brand.

The book is worth not just a single read but many. It should set off some robust soul searching among companies that harbour emerging MNC ambitions.

An early book on the subject was Emerging Multinationals in Emerging Markets edited by Ravi Ramamurti and Jitendra V. Singh. It noted the emergence of the new MNCs and the reasons for their spread.

There was also another book, Winning in Emerging Markets by Tarun Khanna and Krishna G. Palepu, which addressed foreign companies interested in entering territories such as Brazil, India and China. 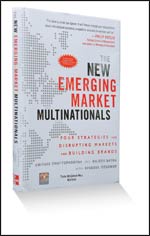 The authors have spliced and diced the strategy pursued by the EMNCs in numerous ways, analysing closely how they tackle management and human resource related issues overseas to their advantage. After examining each aspect of their functioning, the key takeaways are listed at the end - which can serve as a useful handbook for managers.

Every angle of the business has been analysed, including the way EMNCs have forged successful partnerships even with third-party vendors overseas, and how they work under the radar to improve quality.

Sometimes the poor image of the country the EMNCs originates from can affect its performance.

"Titan's Bhaskar Bhat explicitly said to us that his company thought its Indian country of origin was a major reason why its seven-year effort in Europe to market a global watch did not succeed," say the authors.

But they do not stop at merely highlighting the problem, they also show how another company, Temsa, one of Turkey's leading automotive firms, tackled it. Saying more would be giving away too much.

It is enough to say this book is worth not just a single read but many, and should set off some robust soul searching among companies that harbour EMNC ambitions.
TweetYoutube
Tags: multinational companies | MNCs | emerging market | Book review