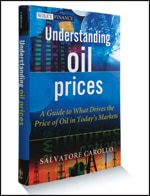 Understanding Oil Prices A Guide to What Drives the Price of Oil in Today's Markets
Salvatore Carollo Wiley
Pages: 168
Price: $60

Why do oil prices rise? Every time there is a hike we curse the government for the high taxes it levies on petroleum products. A handful of us blame that greedy cartel - the Organization of the Petroleum Exporting Countries (OPEC). Some crackpots even go to the extent of giving it a 'clash of civilisations' spin. A few Americans blame it on Indians and Chinese whose newfound appetite for oil is burning a hole in their pockets. Analysts typically offer reasons such as the tensions in West Asia or the reduction in spare crude production capacity. But what if all these reasons are wrong and the rise or fall of crude prices has little to do with the established economic model of demand and supply?

In Understanding Oil Prices, author Salvatore Carollo tries to build a strong case for precisely that. Drawing on his experience of working in downstream petroleum units, in refining, market research and supply and trading of crude oil, Carollo explains the complex oil market. An easier narrative, though, would have made the book more readable.

The book traces the oil market's development, the impact of environmental laws, how pricing power changed hands from the oil companies to OPEC over the years and the speculators' role.

First, he demolishes the demand/supply theory by pointing to the spectacular rise in crude prices to $147 a barrel in 2008, followed by their crash to below $40 levels during the financial crisis, and the subsequent recovery to $120 levels in 2009. He argues that during that period there was no change in the physical demand and supply position. He maps demand/supply and prices over 32 quarters between 2003 and 2010 to show that the traditional economic model fails in 19 quarters.

Instead, Carollo attributes high crude prices to structural problems in the industry, especially the lack of refining capacity to produce highquality gasoline that the US and Europe now requires, as well as low spare capacity to produce the light quality crude needed for the highquality gasoline. Thus crude price is determined by the demand for highend gasoline - a finished product - and by financial speculation.

Carollo compares the advent of financial speculators to the Aesop fable in which a horse, accustomed to drinking at a fountain of fresh crystalline water, one day sees a boar dirtying the spring water. The horse decides to seek the help of a hunter, who, riding the horse, follows and captures the boar. But with the task completed, the man discovers the usefulness of the horse and decides to put a rope around its neck so that it cannot escape. In Carollo's extended metaphor, the horse stands for oil companies, the boar for market turbulence, and the man (hunter) for the futures market.

It gives an accurate snapshot of what happened in the oil sector in the last two decades. The book traces the development of the oil market, the impact of environmental laws, how pricing power shifted from the oil companies to OPEC over the years, and the speculators' role at present. He believes that if structural problems are not corrected and financial speculation reigned in, America will be forced to import petroleum products from China and India in the future. A far-fetched theory for an Indian, music to Chinese ears and a horror scenario for Americans, indeed.