Reich builds a case for why democracy has become a slave of capitalism. And how instead of the former dictating the latter, it is now Supercapitalism that is playing centre forward in the game of life. 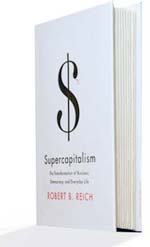 Great books, in my estimation, make their point in the first few pages of the book. Banal books then labour that very point through the rest of the book.

Therein lies the irony of Supercapitalism by Robert Reich. Brilliance—through a staggering social insight on Page 5. And then a monotonous monologue for the remaining 220 pages. Reich’s pedigree is impeccable: Professor of Public Policy at The University of California at Berkeley. Secretary of Labour in the Clinton Administration. Recipient of the hugely honourable Vaclav Havel Foundation Prize in 2003. Equally flawless is his premise. That we have become less of citizens and more of consumers.

With that as the spine of his argument, Reich then builds a case for why democracy has become a slave of capitalism. And how instead of the former dictating the latter, it is now Supercapitalism that is playing centre forward in the game of life. He has other observations to make. Some quite distracted from the central theme. He explores the explosive pay packets of CEOs, questions the role that large employers such as Wal-Mart have in the seismic shifts in American society. How the middle class has been edged out of pole position by the consuming class. He inspects the massive role that technology has had in making this monumental change.

But to be fair, the book does have certain ponderable points. He advocates the fact that corporate income tax must actually be paid by shareholders rather than companies. Hmm, interesting. He also strongly believes that business and politics must be kept away from each other, though one wonders how. He is of the firm opinion that corporate responsibility is a nonsensical idea and that companies are ultimately responsible for profit and profit alone.

Finally, in the last chapter of his book, he professes that reform will ultimately happen only if citizens demand it. One finds that direction to be part utopian and part contradictory. If the ropes of demand and supply are now with the capitalists, how is the citizen supposed to have a go at it? Worse still, does the citizen wish to have a go at it? Between the manifesto and Marc Jacobs, what would he really choose?

The timing of the book is perfect in the Indian context, though. It’s a bit like the communists demanding that we behave like citizens and the rest of the UPA Government hoping we model ourselves on capitalism. Gripping till page 5. Tripping a bit thereafter. But worth a read only because it is a chilling and telling commentary of our times. 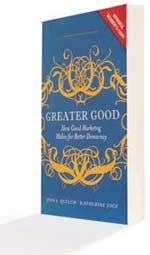 Take whatever that Robert Reich is saying in Supercapitalism and turn it on its head, and what you get is Greater Good. Written by John Quelch, Senior Associate Dean at Harvard Business School (HBS), and Katherine Jocz, Research Associate at HBS, Greater Good argues that good marketing makes for better democracy. How? First, the authors argue, “marketing performs an essential societal function and does so democratically; and, second, people would benefit if the political and public realms were guided by the best of marketing and vice versa”.

The authors don’t look at marketing as a simple business activity. Instead, they look at it from three different perspectives: marketing as an economic function, a business practice, and as a societal force. In doing so, the authors acknowledge the problems that most people have with marketing, including things like inducing people to buy things they want rather than what they need, or price-gouging, poor customer service, shoddy products… the list is long. However, their argument is that on the whole, marketing does empower consumers. More importantly, the point they are at pains to make is that “to recognise the commonalities between marketing and democracy is to grant people the power to create a greater good”.