What does one do after building one of the world’s most respected and admired companies? Try and fix the country, of course. That’s the agenda charted out by Infosys founder and ex-CEO N.R. Narayana Murthy in his debut book A Better India: A Better World.

What does one do after building one of the world’s most respected and admired companies? Try and fix the country, of course. That’s the agenda charted out by Infosys founder and ex-CEO N.R. Narayana Murthy in his debut book A Better India: A Better World. Distilled from speeches made and articles written over the years, Murthy offers understanding and solutions to problems that have plagued the country for decades. Here are five interesting anecdotes from the book.

What is the first task of a leader in energising his people? It is creating a grand vision—a purpose which is noble, lofty and aspirational. It is a dream that should excite and energise everybody in the community or corporation. The leader has to craft and articulate a vision in which everybody sees a better future for himself. The vision has to be powerful enough to make every tired mind and body that leaves the office in the evening come back early the next morning, saying: “I am proud to belong to this company and I will work hard to make it a better company.” 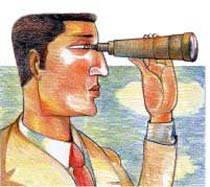 When seven of us met in the small bedroom of my apartment in Bombay in May 1981, we had a four-hour-long discussion on what the dream for the company should be. We started off with the dream of becoming the software services company with the largest revenue. I rejected it. The next idea was to become the largest job creators in India. I said ‘no’ to that as well. Then, we moved on to whether we should strive to be the software services company with the highest market capitalisation. When I rejected that too, there was considerable consternation among my colleagues, Finally, they got tired, and asked, ‘What do you want to do?’ I said, ‘I want this to be the most respected software services company in the world.’ And I continued, ‘if you seek respect, you will not short-change your customers, you will be fair to your colleagues in the company, you will be transparent with your investors, you will treat your vendor partners with care and understanding, you will not violate the laws of the land in whichever country you operate and you will live in harmony in whichever society you operate in. My conviction is that such a pursuit will bring revenues, jobs, profits and market capitalisation.’... I was happy that all my colleagues accepted the idea. They perceived this vision as something larger than life and something more inspirational to go after…

While I see a fundamental shift towards openness among most of our senior bureaucrats, I do not see that shift percolating downwards. I will give you two examples to demonstrate this. The first is about my experience with Shiv Shankar Menon, our current Foreign Secretary. 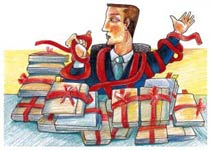 Mr Menon is one of the finest bureaucrats this country has produced. He is a fine gentleman, courteous, always willing to help and constantly on the move to improve the efficiency of his department. A couple of years ago, the government had issued a 64-page passport, but had quickly stopped that practice and continued with the usual 36-page version.

Last year, I requested Mr Menon to provide a 240-page passport to those of us travelling abroad frequently, so that we do not have to get new passports every few months. This would also increase the validity of our visas since many countries require us to obtain new visas whenever we change the passport, New Zealand being an example of this policy. I told him that the 64-page passport was not very convenient since the frequency of travel abroad was high in our industry, and that we would be happy to pay all the expenses needed for a 240-page passport.

Being an extraordinarily openminded leader, he readily agreed and promised me that we would have such a passport. He obviously and rightly expected people in his department to handle this task. A few months later, I was informed that there would be a ceremony in Bangalore where the Minister of State for External Affairs would give me the first new jumbo passport. I was thrilled, but when I received the new passport, I found that it was the same old 64-page passport. The officials present explained that it was not possible to produce a 240-page passport since the ministry press did not have a machine which could stitch 240 pages! It is surprising that, at a time when India plans to land a satellite on the moon*, we cannot import, if not produce, a machine that can stitch 240 passport pages. The problem lies in the mindset of the people lower down in the Ministry of External Affairs. This example shows how an extraordinary leader’s initiatives can be derailed by the outdated mindset of a few people working under the leader.

This has to change.

Let me dwell a little on this issue of the Brahminical mindset. Ancient India encouraged the caste system purely based on the belief in specialisation of successive generations of a family in a given vocation or trade or activity. That made eminent sense at that time. The result was that the Shudra tilled the soil; the Vaisya engaged in commerce and the Kshatriya became the warrior. The Brahmin had the responsibility of connecting the rest with God and was also the champion of all intellectual pursuits. Since his primary responsibility was to think of the afterlife and to connect with higher powers, he had little or no interest in anything that had to do with the present or involved any physical activity. Learning for learning’s sake was his motto, Using that learning to make any difference to society would be dangerous for two reasons—it would not be chic and he might be held accountable!

This mindset is strong even today in India. For instance, when I interview young boys and girls, they insist on working in esoteric fields that have no relevance to solving the problems that beset contemporary India. Their first choice would typically be Artificial Intelligence (AI)! I have tried to elicit why they are interested in AI and their answer is usually that it is intellectually challenging and aspirational. They have no interest in real applications that have at least a semblance of relevance to India. You see the same attitude when our intellectuals comment on Indian companies not having a product focus. I tell them that product skills will surely be acquired and leveraged as Indian companies become more global and have better financial strength. The need of the day is to create a large number of high-income jobs for our young men and women. As long as we run businesses that solve problems of our society, create wealth legally and ethically, and provide challenging and lucrative jobs, it does not matter whether we are into rocket science or bee-keeping.

One evening in the mid-’80s, I met a friend of mine at Ashok Yatri Nivas in Delhi for dinner. He was known to be a good, honest and upright officer in one of the Central ministries. That day, he was very sad and it was clear he was facing a moral dilemma. Over dinner, he confessed that he had taken a bribe for the first time in his life and was very confused. I asked him what the confusion was about, since it was clear that taking a bribe was wrong. His answer stunned me. One part of his mind justified his action since he had seen his minister taking a bribe. 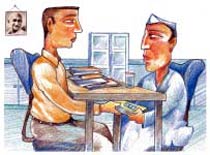 The other part was tormenting him that he had done something terribly wrong. I have no doubt at all that he represented a large number of honest officers drawn into the dragnet of corruption, thanks to the examples set by their bosses. A leader must never put himself/herself in a situation which creates such moral dilemmas in the minds of the people.

Let me now give you a positive example of how corruption was fought in Singapore. This incident, according to my Singaporean friends, took place in the middle ’80s. Quick investigations on the corruption charges levied against one of the ministers showed that there was a prima facie case against him. The concerned minister met the Prime Minister to find out whether he would be protected. The PM was very clear that the minister’s career was indeed over, that he would be punished and that he would never again be able to contest elections. The minister went home and put a bullet through his head. That sent a strong message to all Singaporean politicians that corruption would never be condoned.

Ideally, corruption in government service delivery is eliminated when the state interface is removed from any activity. For example, when the government removed licencing of computer imports, most of the corruption that was imposed on small entrepreneurs dealing with the Department of Electronics was removed in one shot.

I believe that lack of discipline in thought, or intellectual dishonesty, is the second-most inhibiting factor to fast-paced development... There are many instances when policies propounded by a political party while in power are opposed by the same party when it is in the opposition. The other day, I had a very progressive Chief Minister visit me along with his Finance Minister. I asked him why he opposed the introduction of Value Added Tax (VAT). He could not give me a valid reason and left the argument to his Finance Minister, The Finance Minister first said VAT was not good for his state. When I explained the benefits of VAT to his state with examples, his answer was that his party did not like it.

The same party, incidentally, had introduced VAT when it was in power at the Centre! Successful economic decisions require discipline of thought or objectivity to focus on outcomes and results in investments. I recall a vivid example of the lack of such focus in a presentation made on rural housing investments to the State Planning Board of Karnataka in the early ’90s. My questions on the outcomes and results were dismissed as coming from a troublemaker. On the other hand, in China, the pay and promotion of government officials are strongly linked to growth outcomes in their respectiv provinces. Officials are held to growth targets of 7 per cent per annum and have to demonstrate progress every quarter.

*Chandrayaan landed on the Moon in November 2008. This chapter is based on an article written in December 2007.

Are you truly global?

How to reform boards