How companies are keeping employees engaged and productive as they work from home due to the coronavirus lockdown
Sonal Khetarpal | Print Edition: April 19, 2020 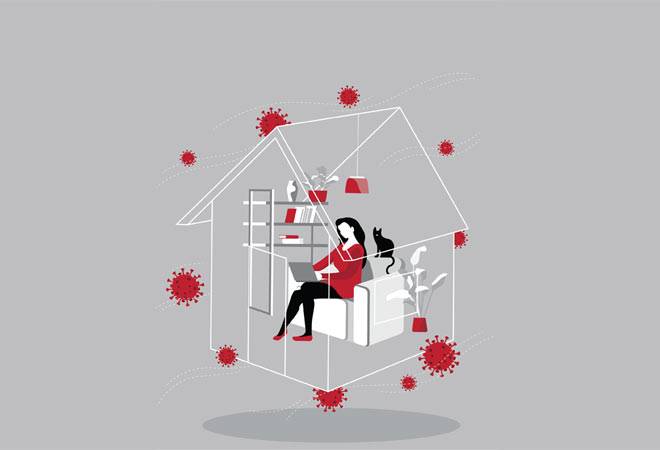 While on a video call with Kerry Singleton, the Singapore-based cybersecurity sales director for Asean at Cisco to discuss his work from home life, his three-year old son, holding a small toy, video-bombed the interview to say 'Hello' to the writer. The mother pulled him out as he kept saying, "Do I need to go?" Singleton says, "He likes seeing and talking to people. This happens at least once a day, so you are lucky. Sometimes it's difficult to manage him alongside work."

That's become the new normal for millions of employees across the world as companies mandate work from home due to the prevailing lockdown to check the spread of coronavirus. While many new-age and technology firms have always offered flexi-work options, the difference now is the sheer number of employees working from home for such a long period considering that the lockdown is likely to last for more than a few weeks.

However, it is not everybodys cup of tea. "Everyone's situation is different, and so are concerns," says Singleton. For people with families, it is kids playing around, dogs barking or grandparents talking loudly as they try to get their work done. For millennials, many of who live alone, it is isolation and boredom. As the reality of one of corporate Indias biggest social experiments kicks in, companies are not only providing employees the right tools to be productive but ensuring they stay happy and productive too.

Working from home is nothing new. Over the years, academic research has highlighted where work from home strategy works and where it does not. Research by Stanford University professor Nicholas Bloom shows remote workers were 13 per cent more productive than on-premises counterparts. Plus, they were sick less, took less time off and had lower attrition rates. But, work from home doesn't tick all boxes for productivity. IBM and Yahoo both called back employees to work after offering remote work for years. The answer lies in research by Judith Olson, who finds that remote work is good for solo work but not for work which requires collaboration.

As many more individuals are working from home now, many are facing issues. It is for the first time they are working in pyjamas and that too completely unsupervised. Bharat Suvarna, Marketing Manager, Schindler India, says it was a bit disorienting in the beginning. It took him some time to align to the new way of work. Several companies have collaboration tools in place that allow them to work anywhere, anytime-Zoom, Yammer, Microsoft Teams, Cisco's Webex, Skype among others. But now, companies are leveraging those not just to get work done but also to ensure that interpersonal communication and camaraderie between team members is not lost.

One thing people miss while working from home is the personal touch, says Nathan S.V., Partner and Chief Talent Officer, Deloitte India. Offices for many have become social spaces where people eat, go to the gym, play video games and depend on colleagues for social interaction. Nathan says their routine calls, called Check Ins, which often related to work reviews, are today more about how they are managing working from home and dealing with the new life. "As other cues of conversation go missing in these uncertain times, one needs to be hyper-sensitive and read between the lines. It doesn't hurt to ask one extra question: Are you ok?", he says.

Firms like Publicis Sapient, Schindler, Microsoft Hexaware and Cisco are encouraging employees to do more of face time. Shubha Arora, Chief People Officer, India and South Asia, Schindler, says they are encouraging people to turn on video conferencing where managers are being asked to have a fixed time in their calendars to touch base with their teams. "At home, we are missing the chai breaks with colleagues, so we are doing no-agenda 'Coffee on VC' sessions where anyone can join for a tete-a-tete."

Teams at Cisco are being creative to add fun to video conference calls. Last Friday, upon a team member's suggestion, Singleton's team did the meeting wearing Superhero masks. "It changed the dynamics of what was a work review call. Everybody started laughing and having fun. It sort of broke the monotony." Hexaware is running many contests to continue with the fun spirit. It started with CEO R. Srikrishna sharing his selfie from an empty office that led to a deluge of photos being shared from employees on their #WFH life on their social media platform Yammer, says Vishwanath Joshi, Chief People Officer, Hexaware. That led to the start of the #selfie content, #workingwithpet video contest, among others.

Firms like Flipkart and Cisco are going beyond team members and getting families involved as work and home boundaries blur. As the writer speaks to Microsoft India's COO Rajiv Sodhi, his pet dog comes looking for attention. He says, "It is important to tell employees that it is ok and such disturbances will happen. People are anyway stressed about what is happening and the last thing you want to be stressed about is the background noise of a dog barking or kids playing."

At Flipkart, parents are encouraged to bring young kids to greet colleagues during video meetings. "This way kids feel happy they are being involved and it creates a sense of togetherness," says the Flipkart spokesperson.

There are a unique set of challenges while working from home. It put individuals in a totally unprecedented situation where entire families are home. Plus, many might not have private spaces in their homes.

As work and personal times blur, where all is merged into one, building discipline is quite important. "Self-management is a big area when employees work from home for such prolonged period of time. They have to manage the social self by maintaining a daily schedule and setting clear boundaries of when they work and when they stop, says Kameshwari Rao, Group Vice President, People Strategy at Publicis Sapient. It has started doing webinars on working from home etiquette and a module on what employees owe the company.

Employees also have to be taught virtual teaming, says Nathan. As virtual teaming and virtual meetings become important, people have to learn to be inclusive where they hear everyone and also speak up. "Virtual meetings often end up being a cacophony of sounds and not speaking up is equivalent to being invisible, which can lead to gradual phasing out," he says.

To give everyone a fair chance to express, Microsoft's Rajiv Sodhi says they are practising inclusive meetings. They are telling everyone that even if they don't want to speak up, they can send inputs on a chat, or whiteboard on their collaboration tool teams. Also, unlike physical meetings that extend for hours, they plan shorter virtual connects with a pointed agenda. "We want to ensure meetings are purposeful, so we are sensitive to the fact that people today have to manage responsibilities at home too."

In these circumstances, Nathan says it is best to clearly communicate start and end time of work and break times. This will ensure consideration to others' routine and time zones. He shares how he had to miss his afternoon meal for two days in a row because his overseas colleagues went for lunch when it was his breakfast time. "Since there is no playbook for working at home, we need to be more emphatic," says Nathan.

Managers too have to develop a mindset to give space to employees to work. Often managers start micromanaging when their team is not in front of them. In these cases, over-communication can turn to be a controlling strategy. A PolicyBazaar employee shares how one of their leaders wanted to copied in all final content pieces. Another employee shared how his boss asked him to share a screenshot of the work after every hour. "I am already working longer than I was in office," he says.

Rao says firms will have to change this attitude. One way to avoid intrusion at Publicis Sapient is to define goals clearly and have pre-determined standards to compare the work against. "Orientation of the entire firm has to be such that it rewards not the effort put in but the impact created," she says. What's abundantly clear is that the current trends will change the future of work. "Work from home is a reality for many companies but there is still this distinction on job roles which can work remotely and which can't," says Neharika Vohra, Professor of Organizational Behaviour at Indian Institute of Management, Ahmedabad.