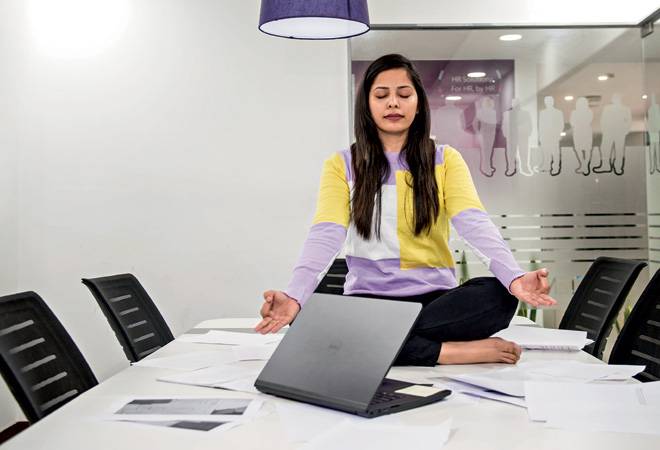 At PeopleStrong's office in Gurgaon, at 11 am sharp, lights are dimmed and, for ten minutes, the speakers play music that can calm nerves. People stop working, focus on their thoughts, and are expected to just be with themselves. The aim is to help them incorporate mindfulness in their everyday routine so that they live better lives and, more importantly, are more productive at work.

Mindfulness became popular in corporate circles in 2007 when Google developed a course, 'Search Inside Yourself', for its employees. Soon, from a way to relieve stress, it became a productivity tool and is now part of employee engagement programmes at several companies, says mindfulness coach Sapan Shrimal, who is also a co-founder of Monk@Work (division of HR firm Strat-Board). Bill Ford, Executive Chairman of Ford Motor Company, LinkedIn CEO Jeff Weiner, SalesForce Chairman and CEO Marc Benioff, all vouch for how mindfulness - a form of meditation - has helped them overcome their biggest challenges and changed the way they run their businesses.

So, what is mindfulness? The father of modern mindfulness, Jon Kabat-Zinn, describes it as "the awareness that arises from paying attention, on purpose, in the present moment and non-judgmentally".

A range of Indian companies, such as Steel Authority of India (SAIL), too, swear by these mind management techniques and say these have helped them improve outcomes substantially. SAIL, for instance, has reported a sharp fall in near miss cases among crane operators at its Durgapur steel plant. Auto company Tenneco xPowertrain India has reported a substantial fall in workplace conflicts after introducing mind management programmes. At the Hinjewadi site of Pune-based construction firm SJ Contracts, mindfulness has ensured that only 5-7 per cent projects are delayed as against 25 per cent earlier.

Market research firm IBISWorld says mindfulness training is a $1.1 billion industry in the US, likely to double in the next three years.

So, why do several top executives invest so much time on essentially 'not doing anything'? It helps them focus, introspect, listen better and, as a result, work better. Harish Abhichandani, Group CFO, Ola, started practising mindfulness in 2015 to manage the pressure of working in high-growth firms. This changed him as a leader and made him question the need to push people to deliver more. Instead, he started working to "mindfully create a sustainable business environment that generates long-term value for stakeholders, including the employees." He says he has become more judicious and fair too. "Due to the practice, I am able to compartmentalise my life. I don't take emotions from one phase to another, which enhances the output from meetings. The decision making has become sharper and objective." At the end of each day, he asks himself, "If I have been productive?" His answer to that now is a big 'yes'.

Shelly Singh, co-founder of PeopleStrong, agrees. She started practising mindfulness to manage the stress of starting up. "Entrepreneurship requires a lot of conviction. It is fraught with failures and demoralisation comes easy." Amid all this, mindfulness helped her remain positive and focus on the problem at hand. As the company grew, the complexity, the uncertainty and the challenges grew manifold, and so she went deeper into these mind exercises and introduced these in the company.

Of the people 200 employees who enrolled for the programme, 95 per cent reported improvement in symptoms related to stress and anxiety. All of them felt that it has led to an overall improvement in their well-being and made them more effective in their work. "We saw a marked increase in retention rates. There was a 60 per cent increase in longevity and stay," says Shelly Singh. She, along with Ola's Group CFO Harish Abhichandani and others, has launched an app, Black Lotus, to teach mind management to others.

How Companies Are Doing It

Mindfulness comes in handy due to the rise in uncertainty in the corporate world, says Sapan Shrimal. Higher risk and disruption in the way work is done is taking companies into unknown territories and they are leveraging mind exercises to ensure employees can cope with the resultant stress, he adds.

India's largest steel producer SAIL has incorporated mindfulness in its leadership training programmes. In 2016, it reached out to IIT-Kharagpur, which has a dedicated research centre on Science of Happiness, for developing a training module. SAIL's Management Training Institute (MTI) in Ranchi started with 20 members from top leadership. Now, mindfulness is part of all leadership courses at MTI. It has come a long way since then. MTI now has its own Happiness Centre where, every year, 2,500 employees are trained in the 140 residential programmes that it conducts. It also offers some in-depth courses, for example EMPOWER, on softer aspects of leadership, using mindfulness. Next year, it plans to introduce training for people on the shop floor and share the course content with other companies and schools. Steel Authority of India's Management Training Institute has integrated mindfulness in all its leadership programmes. The focus exercises at the Durgapur Steel plant have helped the 28 crane operators to be better equipped to concentrate more. After two years, there is a reduction of 75 per cent in near-miss cases.

Companies are trying various ways to ensure that their employees continue the practice. MTI forms Whatsapp and Facebook groups to keep the discussion and momentum going. SJ Contracts has asked its employees to create a journal to record their progress. "Everybody chooses a buddy for himself for encouragement and reminders," says Bhargav Jangle, Director, SJ Contracts.

But not all companies are making it compulsory. Kabir Julka, Chief Human Resources Officer, American Express in India, says one can't bind people to a policy. "If you show mindfulness as an HR initiative, it ends up as an HR initiative and nobody buys into it. It will fizzle out after a while." Instead, American Express has partnered with well-being media platform Thrive Global that shares information on wellness, and mindfulness is a part of it. "It allows people to choose what resonates with them," says Julka. Shrimal says one of the ways to create the culture of mindfulness is to get leaders to speak about its benefits. "Employees should not get the feeling that they are wasting their time. It is the leadership that will have to drive this change," says Shrimal.

Organisations the world over have documented how mindfulness is impacting their business. Health insurer Aetna is a case in point (see There's Proof). SAIL will soon start working with IIT-Kharagpur to assess the overall impact of such practices on the company. However, leaders are documenting the gains to their own business units. At Tenneco Powertrain India, General Manager P. R. Srinivasa begins his day with a mindfulness session. In fact, before any critical meeting or review, they often do a two-minute exercise so that everyone can gather his or her thoughts and bring their whole self to the discussion. Now, they don't stretch discussions beyond 30 minutes, unless required.

Saurav Ray, Head, Corporate HR and Talent & Capability, Tenneco Powertrain, says they have found a significant change in the way people communicate with each other. They have started talking to each other instead of sending stinkers to sort out their differences. "There is a substantial reduction in conflicts from the leadership team coming to HR." In fact, he says, the leaders are spending more time on business strategy. Earlier they would be consumed with day-to-day operations. "So, we have created 25 strategic projects that are being anchored by cross-functional teams under them," he says.

Dudhnath Rakshe, Health and Safety Manager of SJ Contracts, manages 700 labourers and 150 other staff at the construction site in Hinjewadi, Pune. He says squabbles are common. However, since they started practising mindfulness every day, there is more collaboration and they are working better as a team. "People are working more, fighting less, and are happier," says Rakshe. Earlier, there were delays in 25 per cent projects; it has come down to 5-7 per cent. Similarly, the exercises at SAIL's Durgapur Steel plant helped the 28 crane operators there become better equipped to concentrate more. After two years, there has been a reduction of 75 per cent in near-miss cases.

Mind management is sure to catch on big time if it continues to deliver such results.