Imagine a phone that cleans water and dirt by itself, tells us if the fruit we are eating is clean enough and absorbs solar energy, thereby recharging itself on its own! Welcome to the world of Morph—a concept that is being acknowledged by experts as the future of hand-held phones. 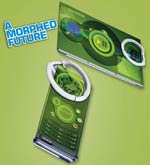 The Morph was a concept device showcased by Nokia at The Museum of Modern Art (MoMA) for an exhibition titled Design and the Elastic Mind recently. The Morph, which we must clarify is not a “working device” as of now, showcases the enticing possibility of what devices will look like within the next five years as researchers delve into radical new technologies, particularly on the ‘nano’ (microscopic) scale. These new nanotechnologies might make today’s sci-fi tomorrow’s reality. We take a look at what the Morph promises.

New flexible and transparent materials will blend in seamlessly with the way we live. The device can change its physical form depending on conditions, adding not just a new usage dimension but also a new aesthetic to mobile devices.

Nanotechnology will enable selfcleaning and self-repairing devices, which will repel not just water or dirt but also prevent grubby fingerprints and repair small cracks and damage without you noticing.

Nanoscale photovoltaic batteries will absorb solar energy on the move; so, the smaller and more efficient batteries will not require physical charges.

An array of sensors will analyse the environment around you as you move about, doing things such as monitoring air pollution or even telling you whether the fruit you are about to eat has been properly washed or not.

Software advances will make the user-interface far more intuitive than ever before and touch, well, that will be yesterday’s news. The device will sense all sorts of movements and adapt accordingly.

You’ve heard the story of a mobile phone not being a mobile phone but rather a “mobile device”. But the phones you will see coming soon will not just be handy all-in-one tools with touch screens and in-built storage. They all look good too. We take a sneak peek.

A phone does not just have to be functional only; it can be beautiful as well. The Serenata is a touch screen music player and a slider phone with a jog-dial input. Like B&O devices before, it might not turn out to be easy to use. But God, the Serenata is pretty! Unfortunately it is also pretty expensive. We know that Apple is on the verge of launching the 3G iPhone soon. We don’t think it will look terribly different from the existing iPhone and we know India won’t have 3G networks for a while yet. But the second-generation device will iron out the wrinkles of the first-gen iPhone, and come with a lot more storage and maybe a better camera as well. C’mon, don’t you always want the latest and best devices? Keep in mind that what you will buy with this super-expensive device is a brand, because the technical specifications do leave a bit to be desired. The luxury specifications, however, don’t— sapphire crystal main screen, monochrome OLED on the outer skin, which can also be specified in crocodile skin. Vertu killer? 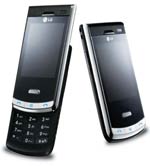 Actually, this phone still does not have a name, but following the success of the Chocolate and the Shine, this new device will feature cutting-edge technology and materials—including a carbon-fibre and tempered glass body.

A republic of songs