On a whirl across the Bay Area, Kushan Mitra spends a day among the vines at Napa Valley. Well, there would have been vines if it wasn’t December.

The Opus One vineyards at Napa
The State Highway 101 headed out of San Francisco and over the Golden Gate Bridge and as I crossed some of the most expensive residential real estate, I began reading up on the story of Californian wine. As the windows filled with vistas of Giant Sequoia and Redwood trees, I discovered that the story is quite fascinating—it had everything—mystery, intrigue and murder and started a good 200 years ago.

Heck, vine from California even saved the French wine industry when the latter was ravaged by an epidemic in the late 19th Century. However, Californian wine languished on the fringes until the mid-1960s, when a group of young men and some not-so-young men decided to save California’s vineyards. One of them was a chap called Robert Mondavi. His story is the story of modern Californian wines, a meeting of the old and new world. The Culinary Institute of America
Mondavi, who died in May 2008 at the age of 95, is the closest Napa vintners have to a god. Born of Italian immigrants, he started his own vineyards after he fought with his brother. But in 2004, he sold his holdings in the Robert Mondavi Vineyards to Constellation Wines and they now maintain the vine-yards just like Mondavi did. But a cooperative still exists and is controlled by the family—the Opus One Winery. This exclusive winery was a collaborative effort between Mondavi and Baron Philippe de Rothschild, the famous French vintner. I could sense the strange merging of the old and new world as I drove up the driveway into the building.

The crop had long been picked, crushed and set to ferment in giant stainless steel stills. The vines bearing the Sauvignon, Chardonnay and Pinot Noir grapes had been removed long before the coldest cold snap in half a century descended on the Bay Area. As I walked into the cellar, I was confronted with the breathtaking view of thousands of casks of Opus One, a Cabernet Sauvignon of deep, rich maroon hues which sells for around $80 a bottle. This is one of the best wines grown in Napa.

But here is the secret about Napa Valley—it really isn’t all about the wine. In the 1980s, with the winemakers winning plaudits all over, Napa began to attract tourists and, more importantly, chefs.

The little town of Yountville between Napa and St. Helena is known as the restaurant capital of California. It is the home of The French Laundry, a Michelin fourstar restaurant, run by celebrity chef Thomas Keller. We ended up at Bottega, a new place run by Michael Chiarello, a Napa resident and celebrity chef on the Food Network.

The advantage of being a foodie is enjoying these leisurely lunches. I started out with the salad, a fantastic mix of local greens, asparagus, dried eggs and local cheese. Then the entrée, which in my case was the most amazing baby back ribs in jus that I’ve ever had. In a rush and my stomach painfully full, I decided to skip the dessert. Which turned out to be a good thing.

We set off north again, driving past acres of surreally empty vineyards while the fog decided to fall off the mountain and into the valley shrouding Napa. We drove past St Helena and onto Greystone, an odd structure in America which looks more like a French château than a building. But Greystone contains the California campus of the Culinary Institute of America, or as they like to call themselves ‘The Real CIA’.

Most top American chefs have learnt their trade in the CIA, which has a few campuses spread across the country, but few are as impressive as this 150-year-old castle. The kitchens are on every level but you first walk into a room with an interesting collection of several thousand wine-cork openers. The wood panels in the castle smell of fancy spices and food, and in the kitchens, young apprentices try out their skills on some of the best in the business and you can try out their fare (along with some local wine) . The CIA also has a little demonstration room area where we were shown how to make an interesting, and horribly rich Eggnog. 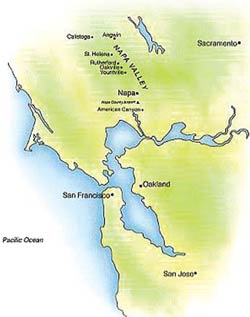 The fog had turned into rain now, and the sky over the hills was a dull gray, almost matching the stones that made up Greystone. The drive back to San Francisco would take us over the Bay Bridge and driving up California Street to the Fairmont on Nob Hill, I kept thinking that Napa has to be done again. Again and again!

Note: Most wineries offer guided tours through the year, please check the Internet for details of tours and tasting tours. Some wineries are open to the public for walk-in tours but most top wineries ask for appointments.