A taste of Padma

The beautiful Padma Lakshmi has a cookbook out called Tangy Tart Hot & Sweet. She chats with MORE about her food fetish, growing up in India and that bit of the bull that she just plain refuses to eat. 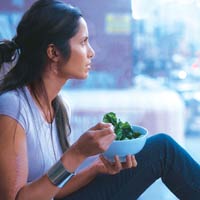 “I think it’s just that. Simply, a stereotype,” says Padma Lakshmi, referring to the idea that models don’t eat. An actress, a model, a television host and a cookbook author, Padma’s out with her second book, Tangy Tart Hot & Sweet. But, surely, supermodels and cookbooks go together like Lalu Prasad Yadav and aerobics. If the food tastes so great, she’d surely eat more of it! “But, I do! I love peanut butter and jelly sandwiches on hot toast. And potato chips, too,” she insists. “In fact, I can finish an entire can of Pringles potato chips in one sitting.” So, how come it doesn’t show? “Models are freaks of nature,” she says. “I just happen to be lucky. Others are not meant to be 5’9” with a 24-inch waist.”

That’s Padma Lakshmi for you—easy, candid, unabashed. The ex-wife of celebrated author Salman Rushdie, Padma was always a celebrity in her own right. A supermodel who walked the runway for the likes of Giorgio Armani, Valentino and Isaac Mizrahi, Padma took to writing in 1999 and came out with her first cookbook, Easy Exotic. She won the Best First Book Award at the World Cookbook Awards at Versailles and later took to presenting cookery shows.

“I thought people were curious to know what models eat, and that’s how Easy Exotic came about.” The book led to a documentary series called Planet Food, which brought her to India, the country she calls home. “I loved doing Planet Food India as it gave me an opportunity to travel to parts of my own country I had not yet been to,” she says. “I was introduced to nonvegetarian Indian dishes that I was never exposed to growing up in a Brahmin household.” But old habits die hard. Out of all Indian cuisines, Padma still picks the allvegetarian Gujarati thali as her favourite and the thought of eating animals still makes her squeamish.

“I hate eating organ meat; it’s really not my thing. And in the Spanish bullfighting section, there was a certain part of the bull I did not relish eating. I‘ll leave it at that.” Still, it’s clear that her heart’s set on food. She hosted the Food Network series Padma’s Passport, which is a part of the larger series Melting Pot in 2001. Five years later, in 2006, she started hosting the popular cookery show, Top Chef. Now in its third year, Top Chef remains extremely popular.

“Cooking for someone is one of the most nurturing acts of human experience,” says a philosophical Padma. She counts Jeff Smith, Julia Childs and Ina Garden as her TV heroes and one of her most prized material possessions is a vintage collection of Julia Childs’ cookery show, and books like The Talisman of Happiness.

Having learnt so much about food, doesn’t she feel the urge to run her own restaurant one day? “If it’s meant to be, I will. I have enough projects on my plate. I was asked by people to open up restaurants in New York and London. But I guess the timing was a bit off.” But there’s no dearth of eateries she loves frequenting. The list reflects her globetrotting celebrity.

“In London, I love China Tang. The Wolsley, Indochine, Daniel and La Esquina in New York. In Paris, it has to be L’amis and Louis, and I simply love Luques and Giorgio Baldi in Los Angeles.” So, what if we kept her captive for years and forced her to eat gruel? She laughs at the question. “Well, I’ll just hope you take mercy and set me free! I am already picturing what my first meal would be. Something clean and fresh like fish tacos, or green salad. I feel I don’t eat enough fresh raw vegetables. They’re great for skin and hair.”

I guess that’s the supermodel talking. And just when we thought it’s the food that she lives for, she’s aiming for a jewellery line next, an old obsession.

“When I was a little girl, my most delicious pleasure was playing with all the lovely things on my mother’s dressing table,” says Padma, in a handwritten note on her website. “Hidden in various boxes and piled on Victorian plates were shiny treasures of all kinds. Necklaces, bracelets, earrings and brooches… I loved to adorn my tiny frame with all things precious.” And with that she signs off—Padma Lakshmi the actor, model, television host, cook book author, fashion writer and jewellery designer.

Swinging with the Air Force

Shopping with the chef