Antarctica, the land of sculptural icebergs, wallowing seals and rookeries of penguins, is in every way a bucketlist destination. Plan a visit to the white continent with our travel blueprint.

It is difficult not to resort to clichés when talking about the last great wilderness that is Antarctica. The advertisement put out by polar explorer Sir Ernest Shackleton, before his famed, albeit failed, Endurance expedition (1914-16), best captures the spirit of the place: 'Men wanted for hazardous journey. Small wages. Bitter cold. Long months of complete darkness. Constant danger. Safe return doubtful. Honour and recognition in case of success,' it said. The lowest temperature ever recorded here is a heart-ceasing -89.2�C at a Russian research station in Antarctica, in 1983. People venturing out in such conditions, if inadequately clad, would have dropped dead within 45 seconds just after their lungs collapsed and their blood turned to jelly.

Little wonder then that homo sapiens are a rarity here, except for the intrepid scientists on outposts, chill-blaining their way to research in astrophysics, climatology and seismology. Other humans show up in packs largely in the summer months, from November through March, in cruise ships. It helps that their movement is all sea-based, with meals, transportation and accommodation combined in one floating package. This is good for both the visitors and the environment, as no hotels or other infrastructure needs to be built ashore. Sledges are a common mode of transport
Three points need to be kept in mind by the traveller. One, for reasons of safety, the cruise company must be approved by the IAATO (International Association of Antarctica Tour Operators), the governing body for Antarctic tourism that has been promoting safe and responsible travel in the region since 1969; two, it's a good idea to spend at least a couple of days at the starting point to get your body accustomed to the harsh conditions; and finally, since Antarctica's key appeal lies in its isolation and edgy vibe of managed danger, ensure that your vessel carries less than 200 passengers (any more and there will be jostling on the high seas).

While it's true that tourists can visit Antarctica only through group tours, these tours don't have to be one-size-fitsall. There are different itineraries on offer that suit different travel needs. The three tours listed below come highly recommended by the tour operators associated with the IAATO.

Indian tourists looking to get their hands cold need to fly out to Ushuaia, the capital city of Tierra del Fuego Province in Argentina, or to Christchurch in New Zealand, to embark on the voyage that best floats their boat.

Penguins catch the sun
Seasickness might get to you here as Drake Passage is infamous for having the roughest waters in the world. But endure this and you will be rewarded the next day with the first stopover at the South Shetland Islands, where the ship stays for the next three days. This is an archipelago of some 20 islands, spread across more than 500 km, lying roughly parallel to the Antarctic Peninsula.

Prepare yourself for visions of penguin rookeries, Antarctic fur seals, wallowing elephant seals and an assortment of Antarctic tundra birds like the blue-eyed shags, kelp gulls, cape petrels and sheathbills. Hop off the ship and on to a zodiac (a fast-moving inflatable boat) to sail to Deception Island for a dip in the thermal waters at the black beach of Whalers Bay. The ship then sets sail across the Bransfield Strait to the Antarctic Peninsula where it spends the next four days anchored amidst frosted white wilderness, interrupted only by penguins, crabeaters, Weddell and leopard seals, and whales. From there, it's a three-day journey back to Ushuaia via the Drake Passage, with a short stopover at Cape Horn. The Classic Antarctic itinerary is ideal for families that include children as it is not too arduous or time-consuming. The ship sets sail from Ushuaia, from where it's a clockwise journey that combines the Classic Antarctic Peninsula itinerary with a trip to the Falkland Islands, South Georgia and the Southern Ocean islands. First stop is Port Stanley, the world's most desolate capital city, in the Falkland Islands. 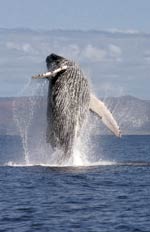 A humpback whale jumping out of the water.
From there, hop back on board to start a three-day and 1,400-km long voyage to South Georgia. Here, visit Grytviken, home to an abandoned whaling station, the South Georgia Museum, the grave of Sir Earnest Shackleton, and watch penguins crowd the beaches of St Andrews Bay or Salisbury Plain. Recall the famous poem The Rime of the Ancient Mariner by Samuel Taylor Coleridge, as you reach the Albatross Island and Prion Island-home to the wandering albatross as well as Fortuna Bay, Gold Harbour and Larsen Harbour. Moving on from South Georgia, across the Scotia Sea, the boat heads towards the South Orkney Islands, but landing is possible only if the weather permits. It's highly windy and overcast here most of the time but that is part of the island's appeal. Next, visit Elephant Island, on the north-eastern frontier of the South Shetlands, where 22 men from Shackleton's Endurance expedition were stranded for four months. From there, it's back to the Antarctic Peninsula, before heading to Ushuaia through the Drake Passage. This popular and highly enriching journey is touted as the 'Explorers' Antarctica' by cruise companies and tourists as the route includes historic hotspots from the 'Heroic Age' of polar exploration. 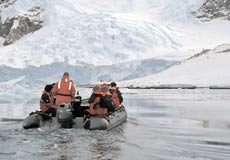 Visitors use zodiacs to sightsee locally.
The itinerary on this trip changes almost day-to-day, depending on the weather. You start from Christchurch in New Zealand in an icebreaker (ship designed to navigate frozen waters) or an ice-strengthened vessel and sail through New Zealand's Sub-Antarctic islands (Macquarie, Campbell and Auckland islands) all the way to the Ross Ice Shelf-the region aptly called the 'Gateway to the South Pole'. En route, the ship stops at Cape Adare, the north-eastern most peninsula in Victoria Land, which houses Antarctica's first base camps and the largest rookery of adelie penguins. At Ross Island, visit Robert Scott's Discovery Hut and his Terra Nova Hut on Cape Evans, as well as Shackleton's hut at Cape Royds. Tourists can also visit New Zealand's Scott Base and the US McMurdo Station, built on the southern end of Ross Island. With a summer population of about 1,100 people, McMurdo is Antarctica's largest base and looks like a tiny town, complete with a hospital, church, fire department, post office, ATM and even a video store. Some ships have helicopters onboard to transfer tourists to inaccessible areas like the Dry Valleys-a row of snow-free valleys in Antarctica located in Victoria Land, and over the Ross Ice Shelf. Being a longer and more difficult journey that involves navigating the ice-choked and perilous regions of Antarctica, this cruise is an expensive and arduous one and is undertaken by only a handful of cruise companies in the world. Only people with prior experience in polar travel are advised to sign up for it. Russia-based Quark Expeditions specialises in Ross Sea trips; there are no Indian players operating on this line.

Whatever be your route of choice, Antarctica is simply spectacular with one of the most fascinating natural settings in the world.

Getting down and dirty