The Concorso D’Eleganza is Europe’s biggest classic car show, and also showcases the latest concept automobiles. Kushan Mitra went to the shores of Lake Como to check it out.

The Villa D’Este stands out in the small Italian town of Cernobio—an impressive classic resort built in 1568—as a playground for aristocrats and royalty over the years that was transformed into a luxury resort in 1873.

he 1967 concept Ferrari Dino 206S
The rich and famous of Italy, Switzerland and Germany all turn up for the exhibition of motorised “elegance” here for the show that traces its roots back to 1929.

The modern avatar of the show dates back to 1998 when the BMW Group became its patron.

The Bugatti Veyron Fbg
The beauty of the show this year was the coming together of the classic and the modern.

Some of the concept vehicles on display showcased future possibilities.

The Bugatti Veyron Fbg, which will be the world’s fastest produced car, was the cynosure of all eyes. Its bespoke interiors have been designed by Hermès. 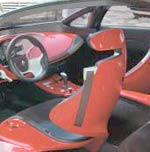 Interior of the Renault Megan Coupe Concept
While the Bugatti stole the hearts of many spectators, one of the most bizarre vehicles ever made was also in the lineup: the Rinspeed sQuba, a modified Lotus that can actually travel underwater.

Frank M. Rinderknecht, founder of Rinspeed, said that he made the car to honour the 30th anniversary of the classic James Bond film The Spy Who Loved Me. When BT More asked Rinderknecht if he was the craziest car-maker on earth, he replied, “I try very hard to be.”

There were other cool concepts on display as well, some of which may actually hit the road soon—like the Ford Iosis X (with a see-through acrylic floor), the Mercedes F700 with rear seats that swing 180 degrees and the Cadillac CTS Coupe, which brings back the famous tailfins.

Interior of the Rinspeed sQuba
Some other interesting concept cars were also on display, including the Maserati Bellagio Fastback and the funny looking Renault Megan Coupe Concept with Dragonfly doors. The windows and the doors of the latter are cantilevered separately and open in two separate sections. However, Renault’s design boss, Patrick le Quement, dashed our hopes by saying that the doors were just a concept, though the rest of the car (with cameras instead of side mirrors, for instance) were for real.

There was also the Bentley GTZ, a concept made by design studio Zagato, which gave the Bentley Continental GT a thorough makeover and made it look much prettier than before, thanks to a redesigned front and the doublebubble roof.

The future of BMW

Many of the concept cars showcased had only been seen in public once before. The BMW Group took the opportunity to showcase its cool new Concept CS, which represents what a future Grand Tourer (GT) car from BMW could look like. BMW also took the warps off the M1 Hommage—a car dedicated to the BMW M1, which was the vehicle that started BMW’s ‘M’ (Motorsport) division.

1928 Isotta-Franchini 8A Roadster
Among the classic cars, too, there was a tremendous turnout with over 50 cars spanning 70 years of history turning up. Unlike vintage car shows in India, the Concorso D’Eleganza is a show that is certified by the Fédération Internationale des Véhicules Anciens and every car that appears in the show must be in working condition and “as original as possible”.

There were several trophies to be given away, most of them decided by the jury, which consisted of some top vehicle designers and automobile writers.

The most prestigious prize— the Coppo d’Oro—was, however, decided by the audience and the ‘people’ voted for the extremely rare 1938 Mercedes-Benz 540K Autobahnkurier.

The car, which is owned by Swiss-Mexican automotive designer and wine estate owner Arturo Keller, is the only working model in the world today (only two were ever built).

At a show like this, you would not expect to see common cars and so, many of the cars on display were one-offs or had historical backgrounds. There were some rare Hispano-Suizas, a fully restored Bugatti 57 and a Daimler Double-6, complete with the elephant hood ornament. There was also the Ferrari 166MM, which won the famous Mille Miglia race in 1950. Among the other history makers on display were a Ferrari Dino 206 S Competizione from 1967 and the De Tomaso Pantera 7X—a one-off car, which was killed by the oil-crisis of 1973. There was also a Lamborghini 350GT on display, the sixth Lamborghini ever made and one of the few surviving in its original 3-seater concept.

Mercedes F700
All in all, the line-up was a treat for any car freak. Many of the cars were shown naked at the show, that is, their bonnets or engine covers were off and you could really appreciate the wonders of engineering back in time, when massive engines churned out the power that you would get today in a standard midsized saloon. But no modern midsized saloon would have the elegance of some of these cars. Almost all these cars are now owned by the rich and famous of Italy, Switzerland, Germany and the US. Industrialists, scientists, watchmakers, doctors—each a car enthusiast, and many of them churning out millions to acquire and refurbish these cars—they were all there.

The Concorso D’Eleganza is a tremendous event, not just because it is held close to one of Europe’s best natural sights—Lake Como (with the Alps in the background). It is a great show also because it does manage to bring people closer to the history of a car while giving them a peep into the future. If you love cars, take our tip: in 2009, make sure you visit Cernobio, a 45-minute drive from Milan, between April 24 and 26. Trust us, you won’t regret it.
TweetYoutube