A magnum opus that explores the journey of the American people from the time of the Red Indians to the present—this is a great read for those interested in countries and their history.

A magnum opus that explores the journey of the American people from the time of the Red Indians to the present—this is a great read for those interested in countries and their history.

It’s Monopoly and Mickey Mouse—but it’s also Barbed Wire and the Can Opener.

It’s the Declaration of Independence—but it’s also Barbie and the Playboy Centerfold—Alfred E. Neuman and Muhammad Ali— Dr Spock and Dr Strangeglove—the Edsel and the landing on the moon!

Iconic America celebrates the snap, crackle and pop of American popular culture with a stunning juxtaposition of over 400 iconic and iconoclastic images chosen from unique melting pot of the American experience.

How American can a food get? And nothing is more American than watching a good movie while munching popcorn sprinkled with salt and dripping with butter.

Popcorn has been served in cinemas since 1912. 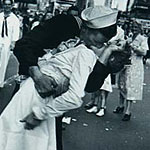 This enduring photo of a sailor kissing a nurse in New York’s Times Square on August 15, 1945, celebrated V-J Day (Victory over Japan Day), the joyous end of World War II.

This Alfred Eisenstaedt photo appeared in Life magazine and charmed the whole world, instantly becoming the iconic image that symbolised the relief and pure joy of that first day of peace after the end of a morally great but terrible war. 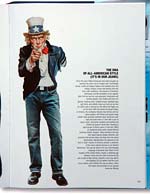 The Oscar, the most famous and sought-after award in American popular culture, was designed in 1928 by architect and set designer Cedric Gibbons; a gold-plated robot rising out of a film reel can, a quintessential American Machine Age design. The statuette got its name from a librarian at the Academy of Motion Picture Arts and Sciences, who called it Oscar because it reminded her of her uncle Oscar. After a few years of staff members jokingly referring to the award as “Oscar”, the name stuck, and was officially adopted by the Academy in 1939. As to the historical correctness of the awards, unbelievably, the superb actor Cary Grant never received one.

It’s in the Jeans Since the early 1960s, Americans have been brought up wearing the clean-cut Ivy League look; comfortable, casual, simple yet elegant blazers and sweaters from the college campus, chinos and denims from the blue-collar workforce—the essence of American sportswear and the foundation of our popular style. Americans with style and taste wore a T-shirt with a pair of jeans, socks and tennis sneakers and looked cool.

Excerpted from Iconic America: A Roller-Coaster Ride Through The Eye-Popping Panorama Of American Pop Culture By Tommy Hilfiger with George Lois: Rs 2,400; Pp 335 (With permission from Universe Publishing)
TweetYoutube

Are you driving a 'safe' car?