Sevilla at the Claridges Hotel has been a romantic haunt for years. But how’s the food? New Delhi
The Riviera
Sevilla at the Claridges Hotel has been a romantic haunt for years. But how’s the food?

You can’t fault the ambience at Sevilla. Whether or not it’s the Spanish Riviera, as the bumph says, it remains a delightful dinner spot in Delhi. I can’t think of many better places to take your partner than one of those booths with the billowing curtains. They’ve got the basics right—the lighting, the distance from the other booths, the unobtrusive service, a rarity with five-star hotels in the city.

But simplicity is tricky when it comes to food. It’s a fine line between simple and plain. And with the arrival of the Lodi Restaurant at the Aman, Spanish cuisine has suddenly become a competitive sport in New Delhi. My sense is that Sevilla, having won all kinds of prizes over the years, may have been caught napping.

I would have loved to see the chef go to town on the tapas platter— a variety of hams, marinated olives, chorizo. The city needs great tapas. I turn up the music a little, infuse the five-star experience with the kind of informality that so suits the Mediterranean, that sense of comfort and vacation and afternoon siesta.

We found the food perfectly pleasant—we ordered a selection of non-vegetarian tapas, the Iberian ham and some fish dishes, the grilled tiger prawns and the pan-fried cod. But the test of a great meal is when there’s at least one dish that surprises you, makes you wipe up the last drop and then pester the chef for the recipe. It didn’t happen this time around. But perhaps it will be the next. For eight years, the Pan-Asian restaurant India Jones has been a favoured dining choice among the city’s Who’s Who. It offers scale, a large semi-private dining area, dim lighting, and, of course, one of the most pleasurable gastronomical experiences in the city. But it also offers a story. Evidently, an Indian by name of Bharrat Joyent aka India Jones, travelled extensively to the Far East and returned with a menu derived from eight cuisines—Thai, Korean, Malaysian, Singaporean, Indonesian, Chinese, Japanese and Vietnamese.

To celebrate the restaurant’s eighth anniversary on August 15, Executive Chef Joy Bhattacharya is putting on a show. The restaurant is hosting a five-day special menu from August 12-18, which will include a set roast duck meal (pre-order) and a Korean Set Meal. The Korean meal includes a stewed farm-raised chicken (Dak Dori Tang), steamed red snapper with sweet soy sauce (Do Mi Jim), broiled tenderloin with sake and ginger (Kal Bi Gooi), and BBQ pork with chilli and sesame-seed oil (Deaji Bul Gogi). All of them served with tofu soup, rice and dessert.

There’s also a live fish offering. The steamed grouper with Laksa (a Vietnamese sauce) is one of the Chef’s favourites. The fish fillet is well done and simmered in Laksa or Thai lemon sauce, and is garnished with coriander, spring onion and lemon grass. And if that’s not enough, the restaurant delights in serving much-required Chinese tea to let the meal settle before offering a wholesome dessert. No wonder, guests return to India Jones for multiple meals in a week to enjoy numerable flavours. 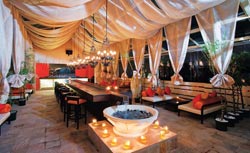 Bangalore
The New Boy
For a lounge bar, Aira feels suspiciously like a north Indian restaurant.

Aira is a relatively new entrant in the IT city’s lounge bar scene. The Facebook page calls it an “ethereal ultralounge”, and it’s not hard to see why. Aira is decked out with billowy curtains on either side, the central seating space is divided by a mini-stream running down the middle and the menu is electric pink.

While most nightspots in Bangalore have a ladies night or a mid-week event to bring in the crowds, Aira is completely empty when we stroll in and it isn’t until 90 minutes later that a group walks in, looking like they’ve discovered Aira by accident.

There are two seating options on offer—relaxed settees for a slow evening or a centre table for the younger and more energetic drinkers (we opted for the former). While my companion’s Strawberry Margarita was on the spot, the bartender flubbed my Tom Collins not once, but twice. Aira’s founders, and first-time hospitality entrepreneurs, Timmy Joseph and Vinod Babu, have some way to go if they’re to compete in a crowded Bangalore scene. Though, I must say, my daiquiri was on the money.

With Rakabdar, an Awadhi fine dining joint located in the same building, it was little surprise that our accompaniments were well prepared. The Peshawari Chicken Tikka was succulent and the masala was well ground and seasoned into the meat. Our other dish, Yogurt and Bell Pepper Soola—deepfried bread dumplings filled with yoghurt and bell peppers, served with mint chutney—was a change from the usual veggie entrée. But just as we were congratulating ourselves on our selection, Aira’s upmarket perception fell through the floor, when we noticed masala peanuts on the menu. For now, Aira seems to be a north Indian restaurant in a lounge bar’s clothing.

Not just for your 'lady wife'