We play 20 questions with Anurag Kashyap, the director of Dev. D, Black Friday and Gulaal.

M: It is political season right now. Who are you voting for?
AK: Erm, I would say Congress, I still prefer them somewhere down there. 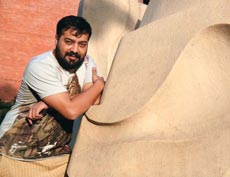 Anurag Kashyap
M: Delhi or Mumbai?
AK: Delhi any day, because of the winter. And the food.

M: Where do you think Bollywood went wrong?
AK: Remember Himmatwala from the ’80s (1983) that began this entire remake business? Suddenly you had a star who fancied himself as Jim Carrey in some slapstick comedy or Arnold in some action movie. Creativity died with that movie and it has taken two decades to come back.

M: Where did you get the idea for Dev.D?
AK: Well one day Abhay (Deol) was over and the two of us were rather plastered on alcohol when he started on this idea of a stripper in Los Angeles and a drunk NRI and how we could base this around Devdas, and the first thing I thought about was Paharganj. M: Dev.D, while full of cultural references would have given moralists nightmares.
AK: Well, you know I actually wanted to create a chain-smoking South Indian character in one of my movies and name him after a minister. You know which one…

M: Who is your all-time favourite movie director?
AK: Fritz Lang. I am yet to see the new version of Metropolis with the new scenes they found, but what a movie! There is also While the City Sleeps. I love his work.

M: And among contemporary directors?
AK: I guess I am over Wong Kar-Wai, I still can’t get 2046. But, and this might sound clichéd, I love (Martin) Scorsese, David Fincher and I think Chris Nolan’s work in The Dark Knight was absolutely stunning. I have to admit I do have a soft spot for action movies. But if there is one director whose head I wish to get into and dig through it is Darren Aronofsky (The Wrestler, Requiem for a Dream).

M: What do you make of the information revolution that has taken over the world?
AK: Well, some people are exposed to too much information too soon and access to immense knowledge can be dangerous. Thirteen-year-olds know far too much. When we were kids or even older, Playboy would be treated with respect. Today on the Internet anybody, no matter what their age, can find out about any sexual perversion. It is rather crazy.

M: How many movies do you watch?
AK: One a day. The last one I saw was Wong Kar-Wai’s Ashes of Times Redux (Dung Che Sai Duk) and the next is this Sri Lankan movie by (Vimukthi) Jayasundara called Forsaken Land (Sulanga Enu Pinisa).

M: What is your set-up at home?
AK: I have a room with a 30-ish inch display but I listen to all my movies over a pair of Bose headphones. I just love them and they just isolate you in the movie.

M: What's on your iPod right now?
AK: Original soundtracks from movies, unsurprisingly. Three of them, There Will Be Blood, In the Mood for Love and Burn After Reading.

M: And what are you reading right now?
AK: A couple of things, the screenplay of The Birth of a Nation by D.W. Griffith and Diary of a Lost Girl by Kala Boof. And a graphic novel as well, actually quite a few of them.

M: Any countries making cutting-edge movies right now?
AK: I think that films from some countries have become very repetitive— Iran, for instance. They had some good ideas a decade ago and now the movies have the same feel. The same with Korea. But I think there are some really good films coming out of Argentina and Scandinavia. Iceland in particular. The movies Jarcity and 101 Reykjavik come to mind.

M: And what about animated movies, you see yourself doing a Waltz with Bashir?
AK: No, because it has already been done. I like being on the cutting edge, but I have worked with animation before in Return of Hanuman. It is a great medium.

M: Which is your favourite city in the world?
AK: New York.

M: Where would you want to go for your next vacation?
AK: Antarctica. My girlfriend and I have planned a trip to South America. I am trying to get fit to get up to Machhu Pichu, I want to go up the Amazon to Manaus. And I want to visit Venezuela and Columbia, even though my girlfriend will be there, because the women are really, really beautiful.

M: And finally, is this play, The Skeleton Woman (starring Kashyap's girlfriend Kalki) the start of something new for you?
AK: Well, I am just the producer. I think it is sad that in India you cannot make a living from theatre and I hope that after this play things will change slowly. I would want to do longer runs rather than just shows for two or three days.

M: Any favourites?
AK: I have always had a great fascination with theatre, you have to read Vinod Kumar Shukla, he is a contemporary theatre writer whose plays are like Charlie Kaufman meets Milan Kundera meets Gabriel Garcia Marquez. But I think theatre is getting some more recognition of late.

Book review: The kindly ones