At large in Combodia

This is the land of the Khmer Rouge and the backdrop of movies like Apocalypse Now. But Cambodia also boasts some of the world’s largest temples. Kushan Mitra went on a magical journey.

Once home to the greatest civilisation in Indo-China— that of the Khmers— Cambodia’s recent history can only be described as tragic. Throughout the latter half of the 20th century, the country was torn apart by foreign powers, the French, the Americans and finally the Vietnamese. Of course, between 1975 and 1979, the country created its own tragedy as the Khmer Rouge regime ended up killing 1.5 million Cambodians in four years— among the most horrific example of state-sponsored genocide since Mao’s Cultural Revolution. 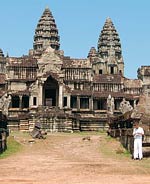 If you do visit Cambodia, don’t just read a guide book. Read Amitav Ghosh’s brilliant short non-fiction collection, Dancing in Cambodia, At large in Burma and particularly the chapter, Stories in Stone, which talks about the temples and their significance to Cambodia. 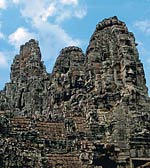 The impressive Bayon Temple
It is easy enough to get to Siem Reap city (5 km from Angkor Wat), if you fly from India via Bangkok, Kuala Lumpur or Singapore.

If you are feeling brave, you may decide to make the 300 km journey overland from Bangkok. The Bangkok-Siem Reap sector is serviced by only Bangkok Airways, which charges a bomb for the very short flight. Expect to pay in excess of 10,000 baht (around Rs 13,000) for a return ticket.

If you decide to go overland from Bangkok, you will end up saving money, but be warned that even though the distance is only 300-odd kilometres, you will spend the greater part of the day travelling. My advice: If you have the money, fly.

Siem Reap is full of affordable hotels
Cambodia has a very simple visa-onarrival procedure. You will need to have a passport photograph and $20 (Rs 800). If you have made a booking in advance, chances are that the hotel will have organised a pick-up from the airport. It takes around 10-15 minutes to get into Siem Reap town from the airport.

What You Need to Know The US dollar is pretty much the de facto currency in Cambodia. Everywhere you go shopkeepers ask for “doh-lah”. You will, however, always get change back in Cambodian riels. Cambodia also does not have a mint, so there are no coins and the currency does not have decimal notification.

The lowest note is 100 riel and the highest note 10,000 riel. The official exchange rate is around 3,750 riel to a dollar, but the street exchange rate, the one that matters, is around 4,000 riel to a dollar. So, you can assume that one rupee is equal to 100 Cambodian riel. It would be prudent to carry a lot of small denomination dollar bills—$1, $5 and $10 bills when you visit.

Siem Reap is unmistakably a tourist town. There are more than 80-odd registered hotels, most of which have come up in the past five years and have the term “Angkor” somewhere in their name. There are several reasonablypriced places to stay. I stayed at a place called City River Hotel, pretty much bang in the middle of town. It cost $40 a night, including taxes with breakfast thrown in for a single room. The room was clean and comfortable, the bathroom had a bath-tub and the hotel had a swimming pool. There are a host of boutique properties in Siem Reap such as the Pavilion Indo-Chine with private villas starting at around $50-60 a night as well as luxury 5-stars with rooms well over $150 a night. A day pass to the Angkor Archaeological site will cost $20 (Rs 800) per person, and the complex is open from 5 a.m. to 5 p.m. on most days. You can also get three-day and one-week passes. A three-day pass would be recommended if you have the time and will allow for short four-hour visits and also allow you to catch some of the smaller, further-out temples.

Nothing in the world, no matter which books you read and TV programmes you watch, can prepare you for the massive scale of the Angkor Wat temple itself. When it was built in the early 12th century by Khmer ruler Suryavarman II, the temple enclosed a space of 203 acres and was built as a shrine to Vishnu. Age and Cambodia’s bloody recent history have taken their toll on the temple and much of the elaborate stone work has eroded away. The five shikharas (towers) of Angkor Wat are not open to the public and there is also a lot of restoration work going on across the complex. The steep steps at Ta Keo
After Angkor Wat, the most famous temple is that of Bayon, which was built by Jayavarman VII, a ruler modern Khmers consider their greatest king. Bayon is being restored by the Japanese government but the temple is in a very precarious position. The giant central tower is already eroded away, and may not remain for long. If you have to visit this beautiful temple, do so as soon as possible.

After visiting several small temples, I went to Ta-Keo temple, which is extremely small. Like South Indian temples that have steep staircases, the 200-plus stairs you have to climb to get to the top of this temple are angled at almost 60 degrees. Not only do you need a good deal of energy to climb (I had some fresh coconut water before climbing, for sustenance) but you need good footwear, too. This is not a recommended climb for travellers with children or for older people. The Old Market: Full of souvenirs
This temple is actually being restored with the help of the Archaeological Survey of India (ASI). It is believed that between 1750-1800 AD, the entire complex of Angkor was “given up” to the forest and this site proves that. The task before ASI is massive as large trees have taken over the temple and now literally hold it in place. It is in a state of disrepair. But almost hidden by trees, this temple is indeed a sight to behold.

Are you a traveller who can’t live without Indian food? I noticed an Indian restaurant called Kamasutra on Pub Street opposite Siem Reap’s old market. But try the local cuisine as well. Khmer food is very much like Thai food, albeit a bit more delicate and lacking the Thai penchant for prawns. There are very good and affordable Khmer restaurants in the Old Market, where a meal for two will set you back by only $6-10 (Rs 240 to Rs 400). There is also the rather fancy Angkor Mondial restaurant near the main bridge where you can catch a buffet dinner (including local food) and a traditional dance performance for $12 (Rs 480) a head, but the show starts at 7 p.m. sharp, so don’t be late.

The Old Market area and the surrounding streets, including Pub Street, have a lot of lively bars and clubs, most of which shut around midnight. If you want a drink, beer costs one dollar a can and a glass of vodka around two dollars. I particularly liked the expatriate-run The Warehouse opposite the Old Market. It’s a really cool place where you can sit back and relax over a drink.

If you have a day to spare, do take time to visit the newly-opened Angkor National Museum on the edge of town. This brilliant new museum has antiquities from all periods of Cambodia’s history, including several Hindu deities as well as a huge hall explaining the history of Angkor Wat.

If you want to shop for souvenirs, visit the Angkor Night Market or the Old Market itself. Remember, you have to negotiate. T-shirts should not cost more than two dollars and you can getsome really good deals.

How to get there:

The making of a durable bond