Animation is not just for kids any more. In fact, it never was.

Not all animation falls into the Lion King and Aladdin category. Sometimes, the lead character is an undercover narcotics agent, who spies on himself and his friends as suspected drug pushers. Sometimes, there’s nothing more adult than a cartoon. 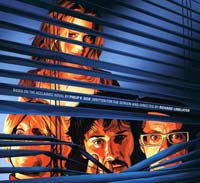 Richard Linklater’s 2006 film, A Scanner Darkly, is an adaptation of Philip K. Dick’s unsettling novel about drug addiction and enforcement. It takes us on a trip through a harrowing world of shifting identities and hallucinations, and the effect is enhanced by Linklater’s revolutionary animation style, a technique called Rotoscopy, which involves first shooting a live action film, and then animating it. A great tool at evoking paranoia.

Linklater isn’t the only major director to have embraced alternative animation. In the ’60s, you had The Beatles’ Yellow Submarine. And in the late ’80s, Japanese Anime masters Hayao Miyazaki and Katsuhiro Otomo were at it too—Miyazaki’s 1997 masterpiece Princess Mononoke is about a fight between the spirit of a forest and humans who want to consume its resources. Scary and bleak, it is anything but a feel-good film.

This past decade the foremost among a “New Wave” of edgy animations has to be the French film The Triplets of Belleville (2003). Funny, humane and often creepy, Triplets tells the story of feisty old Madame Souza, whose cyclist grandson Champion is kidnapped by a shadowy mob and whisked off to Belleville, a surreal city which looks like a cross between Jazz Age New York and pop noir Chicago. Madame Souza enlists the help of three old crones—the Triplets of Belleville, a cappella singing stars from the 1930s who eat dynamited frogs and haunt the dilapidated bylanes and jazz bars. Really, who cares about a lost lion cub looking for his father?

Three animated classics you must see
Spirited Away (2002) A masterpiece by the Japanese legend Hayao Iyazaki. A little girl stumbles across a phantasmagoric world ruled by a spooky old woman.

Persepolis (2007) Marjane Satrapi’s delightful autobiographical graphic novels of growing up in Iran and Europe are brought to life in this twodimensional black and white film.

Fritz the Cat (1972) The X-rated Fritz was a huge hit. Drawn and written with cult cartoonist Robert Crumb, Felix is a hell-raising randy cat, who gets into all sorts of bawdy scrapes.

Movies to watch out for in 2009
There’s a lot of quality entertainment coming your way this year, especially if you’re a graphic novel fan.

January
Notorious, directed by George Tillman Jr., is a look at the life of iconic rapper The Notorious BIG. Defiance, starring Daniel Craig, is about a 1941 mission to rescue Holocaust victims.

February
Coraline, directed by Henry Selick, is the animated version of Neil Gaiman’s scary fable of a girl lost in a looking glass world.

May
X Men Origins: Wolverine, directed by Gavin Hood. Hugh Jackman returns as the fierce mutant in this origins story.
Star Trek, directed by J.J. Abrams. A fresh take on an old favourite.

Hang It on the wall