How to be a man when it all goes

Life is exhausting for the modern man. Use this emergency rescue pack to rise from the ashes of everyday disaster.
Team BT        Print Edition: September 13, 2015 It happens to the best of us. Look your executioner in the eye when the axe swings, then stride straight off into a better job

"No matter how you feel, breathe deeply and count your breaths," says Gaurav Sareen, relationship coach and behavioural specialist. "If you're angry, say you need a minute and leave." Show ing that you can handle a tough situation in a mature manner is a great way to preserve your reputation even after you have left the organisation.

Don't argue your case there and then, says Sareen. Ask for a meeting at a later date when your protestations sound less like the office equivalent of "Baby, I can change." Control your body language and tone of voice-you might need these people for a reference or future freelance work. Gather evidence, structure your argument and return to change their minds when your head is clear.

This is the most important phase that will determine future prospects. But don't approach industry contacts yet, he says. "On the personal level, monitor your emotions. Tell your loved ones how you feel. Encourage colleagues to stay in touch. "It is also the time to head off for a few days without any agenda," concludes Sareen.

Now that you have lesser anger, start that job hunting with an objective approach, he says. "You've thought through priorities. This means you won't jump at the first available opportunity!" You could work closely with a career coach on your CV, interviewing skills, LinkedIn profile etc. "And it's also important to go back in time to enjoy, savour, and be proud of your achievements!" says Sareen.

When you're back on your feet, resist the urge to brag to old bosses or colleagues. "Instead, consider what contacts or help you can offer them-being owed a favour is a better return from that meeting than 10 minutes spent crowing about your new post," he adds. It won't seem that way, but trust us.

You're Caught By The Fuzz

You've been pinched, but stay calm. Solicitor 'Mr Loophole' is here to spring you

However frustated you are, adopt the demeanour of a cooperative snitch - you're there to help, even if you give them no actual intel. Answer politely - don't be testy, aggressive or bored, says Pranav Proothi, a Delhi-based advocate and partner, Utkarsh Associates. Any annoyance will rile them; how you behave now will influence how quickly you'll be able to let go. Keep your body language open, arms in your lap and never folded. Adopt a flat but friendly tone and don't mumble.It's all about sounding apologetic without admitting guilt.

For a driving offence, be it rash or drunken driving, you can't do much. Either you will be issued a challan or you will be booked under Section 279 of the Indian Penal Code and a trial will be conducted, says Proothi.

"Earlier, we did not have electronic challans, so the cops could threaten and/or impound you. But if you feel the cop is harassing you for no reason, then you can dial 100 and make a complaint against the officer," adds Proothi. 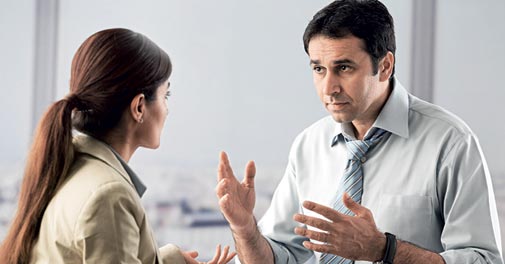 You've been given the elbow

Your ex (get used to it) just broke things off and you're an emotional mess. Science weighs in on the best and worst ways to deal with a broken heart.

THE STRATEGY
Gamble your grief away

THE VERDICT
Skip it

A blowout night at the casino might sound like a good idea, but you're likely to spend almost four times more money after a break-up, says Psychological Science research. That's not just dangerous for your wallet. UCLA research found if you feel out of control, it takes longer to recover from heartbreak. Plan a different escape, like building a game room, for argument's sake.

THE STRATEGY
Surround yourself with women

THE VERDICT
Do it

It's natural to worry that you'll have a hard time finding another partner, according to a study in Evolutionary Psychology. But this is just a neurological number game. The more options you have, the better you feel about your prospects. Yoga classes, Tinder, a sailing trip down the Dalmatian coast- just go where the women are.

THE STRATEGY
Seek a shoulder to cry on

THE VERDICT
Skip it

When people relive a break-up, they get stuck in a rut of negative emotions, say researchers from Columbia University. Rather than reminiscing to well-meaning friends about all the good times, get angry by listing the traits about her that annoyed you. Research in the journal Emotion shows that people move on much faster when they are angry at their exes. Be annoyed!

THE STRATEGY
Find strength at the gym

THE VERDICT
Do it

Exercise is the best possible distraction from heartache, and it triggers your brain to pump out mood-boosting chemicals that douse your despair. Start a new weights programme or sign up for a 10K in a foreign city. May we suggest Zurich - a Durex survey found the Swiss have the most satisfying sex lives. It's time to get back in the running, man.

Workplace rules: How to help your team perform consistently

Launch of a Star