The Art of Time Management

If you're given an empty canvas and asked to paint your inner thoughts, the brush is likely to slither across it with abandon, giving form to your whims and fancies. Art is freedom and a conduit to express individualism. But, if the canvas turns into a priceless gold dial, the brush morphs into a scientific engraver, and your job is to carve microscopic details on it, being an artist takes on a new meaning. The fear of faltering on a tiny piece of metal, that a team of engineers and artists have already spent years labouring on, is at once unnerving and challenging.

Like a good timekeeper Vacheron Constantin rules out any uncertainty by using the past and the future to its advantage. So, while the age-old know how is passed on to the apprentices, they are also encouraged to invent. The young watchmakers undergo a four year training programme under the aegis of old-timers and pick up rare skills like assembling astronomic and navigational complications and understanding the metrical placement of the watch's gear-train and escapement. The Japanese maki-e lacquer tradition defines the intricacies on the dial
The 250-year-old tradition might be weighty enough to eclipse any effort at innovation and change, but it doesn't. Just as watchmakers in the 18th century were referred to as 'cabinotiers', or craftsmen, today's generation too treasures its association with art and innovates order to keep creativity at the fore. What's more, the brand seats them in a little heaven near Geneva where they look out into grassy stretches, enjoy the cool breeze and hear chimes of cow-bells while they ideate. With pictures of their family and quotes on horology pinned around them, they are hunched over in a relentless passion for their product, and for life in general.

In 1994, the brand observed the 400th death anniversary of Gerardus Mercator, the architect of the world's first flat geographic maps, by enamelling his creations on the dials. More scientific than creative though, but its success served as a yardstick for future interpretations. Ten years later, the Metiers d' Art was born to preserve traditional arts like enamelling and engraving. 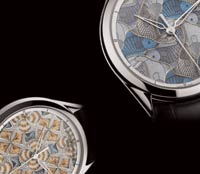 The metiers d'art trend was started to revive traditional arts like engraving and enamelling.
The first series recreated the historic journeys of Marco Polo and Christopher Columbus. For this, the dial was diagrammed with the geographic locations of their adventures, in their latitudinal exactness. The art at play here is 'Grand Feu' which involves placing the visual composition on the dial, dot by dot with a fine tipped brush. The movement too blends with the theme, as the hour glides across 120 degrees like a ship in sea-tide and the minutes inscribed on the lower enamel dial resemble markings of a nautical compass.

The Metiers d' Art Les Dragons Collection embodies the Chinese sacred symbol through a Guilloche motif which results from an alternating use of two machines, one to engine-turn straight lines and the other to rotate the work- piece on its axis for engraving curves. For the first time, this created non-geometric lines that ran erratically over the colourfully metallic dials, leaving a dramatic visual effect.

The Metiers d'Art La Symbolique des Laques roped in artisans from Kyoto's oldest lacquer house, Zohikoto, to unleash on its watch-faces, the art of 'maki-e'. This involves sprinkling gold and silver dust on moist black lacquer to define the delicate motifs of flora and fauna. To complement its delicate patterns, the 1003 calibre movements were done in 14-carat white gold and skeletonised exquisitely in its nucleus. But, the most unusual Metiers is Les Masques that replicates extinct tribal masks from Geneva's Barbier Mueller Museum. As if afloat, the masks sit on translucent glass as the calibre 2460 movement stands concealed underneath.

To boost such ancient crafts, the brand has set up the Cercle 250 project that generates awareness with corporate sponsors. To cut a long story short, Vacheron has committed itself to preserving what's good and creating what's better, and has succeeded each and every time.
Tags: Watches | watch making