Who says working out can’t be fun? If going to the gym five days a WORKS ON: It’s an out and out cardio workout. week is not quite your style, attend a dance class instead!

Exotic dance forms are fast catching on as a fitness routine among India’s rich and famous. From senior executives of MNCs to film stars and advertising gurus, men and women in their early 30s to the late 50s are all swaying to the beats of salsa, bossa nova and paso doble. Sounds Latin? Maybe, because it is! But boy! They do change those flabs to abs in no time at all.

Why: This high-energy dance is a faster version of the samba. Rhythmic, exotic and out and out sexy, it involves a lot of upper body movements, including the hands. The emphasis in this dance is on the swaying of hips and bending the knees with each step. It initially started out as an accompaniment to the bossa nova music in the sixties. The term "Bossa" in the Brazilian slang of the cities means “special ability”, whereas the Portuguese translation of bossa nova is “New Wave”. The man initiates the dance by stepping forward on his left foot, while being sure to bend his knees and keep his upper body straight. Move a step backward if you are the woman in the dance. Remember, the woman will be performing the opposite of what the man does in this dance.

Works on: Superb for strengthening the back muscles. 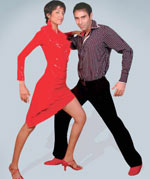 Why: There’s good reason why the whole world’s grooving to salsa. Not easy to define, it’s a combination of many Latin American and Afro-Caribbean dances. It can be called a fusion of informal dance styles having roots in the Caribbean (especially Cuba), Latin America and North America. “One good thing about salsa as opposed to other workouts is that apart from the physical benefits, it brings people together. There’s a lot of camaraderie and emotional bonding that comes with such a dance form,” says dance and fitness instructor Sandip Soparrkar. It’s great for strengthening your legs, hamstrings, calves and arms. The advanced movements of the form strengthen your back and chest muscles. “I love the salsa as it’s so much fun and a great stressbuster. It’s just right for toning up your muscles and improving your posture,” says Dr Rashmi Shetty, one of India’s leading cosmetic dermatologists, who has taken up the dance form to stay fit. 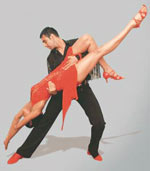 Why: The fastest of all three dance forms, it takes its inspiration from the drama that has come to be associated with Spanish bullfights. Don’t be fooled by the literal translation (paso doble means two steps in Spanish) as the dance form is much more than that. “It has all the elements of strength and involves a lot of cardio activity,” says Soparrkar. The man plays the part of a matador, and the female that of the matador’s cape. “I like the strong mood of the dance, and the colours like black and red that have come to be associated with it. It’s great for working out as there’s a lot of movement and your entire body is targeted,” says model Jesse Randhawa, who has taken to paso doble to stay fit. Well, dancing at an unbelievable speed of 62 beats per minute would mean a lot of technical ability, but there’s no reason to lose heart as the basic steps can be quickly learnt and mastered by anyone.

Works on: It’s an out and out cardio workout.

All dance moves recommended and performed by Sandip Soparrkar.

What the Mexicans haven't told you yet

All the Oscar men