Dealing with the fuel bomb

Taking care of just a few things can reduce your annual spend on fuel by about 25 per cent. So, that will, in effect, mean that you are paying just about Rs 37 for a litre of fuel instead of the current price of about Rs 50 per litre.

Yogendra Pratap
So, it has happened again! After so much talk and amidst dire projections of the cost of a barrel of crude crossing the $150 (Rs 6,450)-mark, one could breathe a sigh of relief that the cost of fuel was raised only slightly, by about Rs 5 per litre for petrol and Rs 3 a litre for diesel. When I was in the US a year ago, I bought gasoline at just over $2 (Rs 80) a gallon. It is now at over $4 (Rs 172)! There are lots of plans and options for the future, including alternative fuels and different propulsion techniques, which will have to be in place for the next generation cars, if not earlier.

However, in the meantime, we are stuck with our cars—and spiralling fuel prices. But, you would be happy to know that taking care of just a few things can reduce your annual spend on fuel by about 25 per cent. So, that will, in effect, mean that you are paying just about Rs 37 for a litre of fuel instead of the current price of about Rs 50 per litre. The measures that you can put into effect can be broadly classified under three heads—hardware, software and common sense. 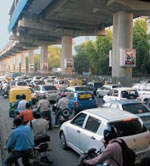 Spiralling fuel prices: In order to get optimal fuel efficiency, your cars have to be well looked after
Hardware
The first tenet is that the car has to be well looked after for getting optimal fuel efficiency. And, it’s not as if old cars cannot match up to the fuel efficiency of new cars. In fact, a well-maintained old car (around 20,000 km on the odo) will give you, on an average, 8 per cent better fuel efficiency than a brand new car. Although people might tell you that a clogged air filter might actually increase fuel efficiency, I still recommend cleaning the air filter more often than recommended (especially in dusty conditions). Under-inflated tyres can cause a straight 10 per cent drop in fuel efficiency while over inflated ones will improve mileage, albeit slightly. But over-inflation is a compromise between many things, including safety, so it’s best not to get overambitious.

Software
Driving style is one of the key factors in determining how much you will be spending on fuel. Keeping an eye on the rev counter to shift to higher gears as early as possible should be key on your list. And do you always move to the highest gear for a particular speed or have you often made the mistake of driving at your top cruising speed of 80 kmph while still being in fourth gear instead of the fifth?

Common Sense
Tanking up early in the morning makes a difference at places that have a wide variation of temperature between the day and night. Anticipating traffic movement can be another boon in city driving and avoiding braking when you can roll to a stop will help save you money each time around. Driving on highways with your window rolled down can also cost you by increasing drag. Keep the windows rolled up.