When it comes to the Rs 50-lakh sedan market, it’s a face-off between three German powerhouses. Who’s going to come out on top? 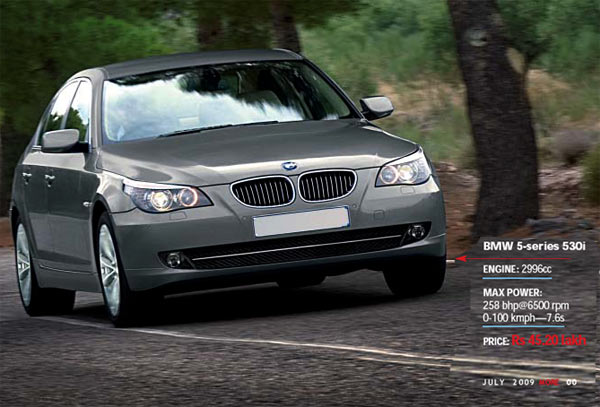 When it comes to the Rs 50-lakh sedan market, it’s a face-off between three German powerhouses. Who’s going to come out on top?

What’s not to love about a Rs 50-lakh sedan? It’s just perfect combination of class, safety and luxury that speaks volumes but doesn’t shout, a blend of comfort and performance. It’s not an unwieldy limousine, it’s not a statement of extravagance— it’s a sports car in an Armani suit. And India can’t get enough of them. Sales have jumped from 6,201 units in 2007-08 to 8,313 units in 2008-09.

The Rs 50-lakh sedan is a jack of all trades and master of some. It’s a smooth ride, but without the suspension set so softly that it wallows when cornering; large enough for five adults, but still sleek; and it has the full complement of features— keyless entry, leather seats, remote security, antilock brakes and a navigation system. And let’s not forget 0-100 kmph stats of about 8 second.

Most manufacturers struggle to find the right balance between luxury and performance— there have been many pretenders and few worthy incumbents, despite the advance of Jaguar and Lexus (which are only available via import because of limited demand, the brands just don’t have the cachet as yet). But in today’s turbulent auto market, the luxury sedan market is firmly in the hands of three German titans, their reputations precede them—Mercedes, Audi and BMW. It’s a battle for pole position.

The German heavyweights have led the field for good reasons—reliability, a tough build and technological innovation are a few. But brand prestige is critical—the rich have always seen Mercedes and BMW as symbols of wealth and sophistication, with the four-ring warrior Audi breathing down their neck. So, just to narrow it down, let me pick a shortlist—my favourites, over a career of test-driving cars.

The Audi A6 3.2, BMW 5-series 530i and Mercedes Benz E-class E280. It’s a tough call, picking between them—like determining who is better among the reliable Raul González (the Merc), the magician Zinedine Zidane (BMW) and the mercury-footed Cristiano Ronaldo (Audi).

The rivalry between the heavyweights from Stuttgart (Mercedes) and Munich (BMW) is over six-decades old. It’s a littleknown fact that the Bavarian car maker (BMW) was about to be put out of commission in 1959 when Mercedes-Benz was all set to buy out the car maker. But BMW dealers and small shareholders refused to throw in the towel and by 1962, BMW introduced the 1800 and 2000 models, which began the fight back. By the 1980s, the 5-series E28 changed the luxury car segment with its high performance, and ever since BMW has stuck to that DNA. The 5-Series E39, which stopped production in 2003, was regarded as the best sedan of its segment. But then Benz struck back in 2002 with the W211 E Class, the official car used in Men in Black II.

In 2003, BMW’s image changed forever, thanks to its Chief of Design, Chris Bangle, a former chief of design at Fiat. Bangle’s radical design for the E61 5-Series split the BMW fraternity—some saw Bangle as a visionary, others wanted him fired for disregarding the company’s heritage, even putting up petitions online. He silenced his critics when he Bangled the competition. It’s hard to believe that the 5-Series, after some nip and tuck, still retains the 2003 design and looks more futuristic than the competition to date.

Letter from the editor