Crowning Glory
Abu Dhabi houses some of the world's best experiences in terms of hospitality, lifestyle and luxury. Skip Dubai and head to the capital instead.

There's no denying that oil millionaires dotting the United Arab Emirates have changed the face of the region. After many years of Dubai stealing the thunder as the luxury mecca, the capital city of Abu Dhabi is now taking over. In the recent months, the city's luxury market has seen a sudden influx of the world's leading fashion brands. Being spearheaded by the Chalhoub Group, this new trend has seen key players venture into the capital city. So this summer, book your trip to Abu Dhabi to experience the best of the best. Stay at Aloft, one of the world's top lifestyle hotels, while you shop at the biggest brands. And be sure you travel aboard the region's award-winning airline, Etihad Airways, so that you are party to their Swarovski connection. The airline has tied up with Swarovski and launched ultra-luxe amenity kits for first class travellers. While women enjoy Swarovski sparkle in their kits, the men get chic cufflinks encased in leather, eyeshades and a superior shaving kit. Get with the programme.

Cut your losses
Bernie Madoff, the culprit behind a $65 billion ponzi scheme has had his entire life auctioned to compensate for the losses incurred on his investors. The latest casualty, is his liquor collection which was auctioned on May 18, and amounted to an estimated $15,000. The proceeds of his liquor splurge too, will go towards a compensation fund managed by the government.

Up for grabs
Cough up €one billion and the French fashion house Pierre Cardin could just as well be yours. The 88-year-old legend has decided it's time to pass the sceptre to the next generation to continue his legacy-and since he is childless, the company goes to the highest bidder. In order to maintain the brand's iconic image, Cardin himself will stay on as Creative Director. Now here's the catch; while Cardin has demanded this whopping amount in exchange for his brand, bankers have valued the company at a much lower € 200 million. While negotiations continue, it's safe to assume there will be no dearth of takers for this ultra luxe fashion house. Go ahead, place your bid.

Man Vs Machine
Imagine walking into a restaurant and communicating with a compact digital tablet in place of the smiling waiter who would ordinarily come to wait on you. This is no longer just in the realm of imagination as retaurants across the world are becoming more and more tech savvy. The latest addition to the electronic rat race, and yet another indication of human dispensability is the Ela Carte tablet which threatens to replace waiters in restaurants with digital tablets doing their jobs. Here's what this little machine can do; diners can browse pictures of the dishes on the menu, modify their orders, recieve wine and food pairing advice, play games while waiting for their meal to arrive, decide on side dishes, pay by check, and even split the bill on the spot; all at the mere touch of a button. In other words, you can literally go through an entire meal without a human interface. Sounds perfect? Let's give it a try before deciding.

Cults, Cults
This rising American duo unleash tween pop of the most arresting kind, mixing innocence with edge to create a fascinating album.

Lady Gaga
This new album from music's notorious wild child is a fairly generic Americana album with a kitchen sink worth of producers. Gaga thrills again

Death Cab for Cutie, Codes and Keys
Hot on the heels of their crossover chart-topping success comes this album of maudlin, but beautiful songs.

6 Things To Do This Month

1. Saffronart online auction On July 24 for exactly one hour, go online and bid for art. This online fine-art auction house has curated a significant collection of 99 works of art done by some of India's leading Modernists, including names like Tyeb Mehta and Ram Kumar among others. The auction gives young collectors a chance to acquire relatively affordable artworks.
Website: www.saffronart.com

2. Wireless festival There's no better time to visit London than the month of July. And to make things better, music lovers and tourists alike, can cash in on this superb summer festival held from 1 to 3 July. Held annually at the scenic Hyde Park, this event promises to be worth your while with great music, chill out areas, a beer garden, food stalls and some stellar performances.
Website: www.wirelessfestival.co.uk

3. Bastille Day, Pondicherry The French heritage of the Indian town of Pondicherry dates back to circa 1673. On July 14 every year, the the town celebrates Bastille Day with great pomp and show, as a parade winds through the streets chanting French and Indian national tunes, and French flags are mounted outside homes.
Website: www.pondicherry.com

4. Media Expo
Every year, the Media Expo in New Delhi brings together exhibitors and buyers from the Media and Advertising industry from India and abroad. Giving individuals in this sphere a space to network, it is held annually and this year will be running from july 29 to 31.
Website:www.biztradeshows.com

5. British Grand Prix
The Grand Prix 2011 is being hosted by Silverstone, and with both Jenson Button and Lewis Hamilton aiming to climb atop the podium and recieve the ultimate honour, this year promises to take spectators on quite a ride. Held from July 8 to 10.
Website: www.silverstone.co.uk

6. T in the park
Coinciding with the Grand Prix in England, but catering to a radically different audience, Scotland's most lavish and regaled music festival will be held this year from July 8 to 10, and like every other year's success, this one is expected to be no less. Make sure you get in on all the fun.
Website: www.tinthepark.com 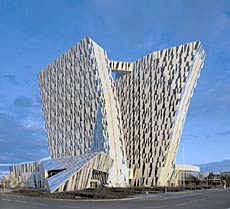 Stay and Dance
The Bella Sky Comwell in Copenhagen is the latest and largest addition to the burgeoning Scandinavian hospitality market. With its avant-garde exterior, 814 designer rooms, and panoramic views of the entire city, this new hotel really is at its absolute zenith. The two towers, both rising 23 floors high, inclining in opposite directions and covered in glass shards, resemble a dancing couple. The aesthetic beauty of the buildings apart, each feature serves an engineered function. While the inclination of the towers allow for unobstructed and spectacular views, the glass body helps in insulation and keeps the interiors warm. If you were looking for a reason to visit Copenhagen this year, this should rid you of any hesitation!

Infinite credit
JP Morgan's new Palladium credit card gives exclusivity a whole new spin. And though it seems too good to be true, they've covered their tracks every step of the way. Card holders must have a minimum of $30 million in savings and be members of a private bank in order to qualify for the card. Once you've made the cut, you can avail facilities and benefits that no other card holder can dream of enjoying. The card itself is worth about $1000, with a body, made of palladium with 23 carats of gold. Seems like a small price to pay for a truly exclusive experience.

A Different Spin
Automotive giant Shelby Carroll and Felt Bicycles have teamed up to manufacture a stylish two-wheeler which is being produced as a limited edition for $999 and being distributed globally. Fans of the Shelby Cobra and Mustang can now enjoy the triple-geared, cruiser inked in the legendary Wimbledon White and Guardsman Blue colour scheme in keeping with Shelby's iconic vehicles. Engineered based on Felt's foolproof mechanism, with 36-spoke wheels, this dream machine promises you 'fast and precise handling' regardless of the terrain you're traversing. There's no better way to do it, it's environment friendly, sleek, easy to manouvre, and 100 percent stylish. Riding a bicycle just got cooler. 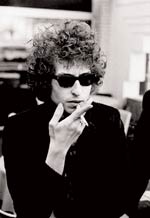 As the wizened old 'voice of a generation' enters his eigth decade as the king of rock, here is some Dylan trivia.

1. One of the most famous and revered names in popular music, Bob Dylan's real name is actually Robert Allen Zimmerman. He changed his name to pay homage to his favourite poet Dylan Thomas.

2. Although he initially made his name as an incisive and blistering folk singer, his first love was rock n roll, performing in local bands like The Shadow Blasters and The Golden Chords.

3. There were so many pop singers and bands covering Dylan's songs in the 60's that he was tagged "Nobody Sings Dylan like Dylan."

4. Known to be a playful and inscrutible man, Dylan outraged many when he appeared in commercials for brands as varied and disconnected from his music as Victoria's Secret and Pepsi.

5. In 1996, there was a campaign by literary critics and academics who wanted Dylan to be awarded a Nobel Prize for literature.

6. Fellow superstar Paul McCartney has compared Dylan to Pablo Picasso and said that he can do no wrong.

Diamond drink
Here's one item that tops the list of exclusives. D'amalfi Limoncello Supreme, the world's most expensive bottle of liquor, can be yours for a whopping � 27 million. There are just two bottles of its kind in existence; the first was commissioned by an Italian woman, while the second is up for sale. The bottle contains three single cut diamonds at the neck, while the body shows off an 18.5 carat rare diamond. Within, is a special limoncello, designed by Stuart Hughes with content invented by Antica Distilleria Russo from Italy. Save this one for the perfect occasion, because there ain't another like it.

Pledge your vows
After serving as a space for historical events, the British parliament might now be open to MPs and the general public to host marriages and other public events. The move is aimed at bringing in much needed funds to the catering operation at the Palace of Westminster. Though the proposal is still awaiting approval from the Queen and Houses of Parliament, you just might be lucky enough to tie the knot in the same space which has witnessed years of history in the making.

Run for your life