Upcoming events, new releases in books, bikes and things to do this month

The new Metropol Parasol is an architectural revelation that has altered the landscape of its city.

The new Metropol Parasol is an architectural revelation that has altered the landscape of its city.

The Plaza de la Encarnación in Seville, Spain was nothing more than a dead spot in the middle of the city. It was in the process of being turned into a parking lot, when the sudden find of ancient Roman ruins spurred the decision to revitalise the space.

Competing suggestions were invited from some leading architects, and one of them, Jürgen Mayer H, came up with the winning idea. Coined the Metropol Parasol, his design-a futuristic bit of cutting edge architecture-will house a museum and community centre. Seven years in making, this mammoth project more than lives up to the hype and effort. Strongly resembling a waffle-like cloud rising 30 metres high, the Metropol is made up of undulating parasols interlocked like a honeycomb.

Viewers have expressed opposing opinions in regard to this contemporary structure which makes a unique statement amidst the other buildings of inner Seville which date back to the medieval era. While some feel it stands out like a sore thumb, others view it as a a work of genius in step with the changing times. It's the world's biggest wooden structure, and an iconic eco-building to boot. The open-air restaurant is sure to be a big draw, along with an elevated plaza. Bring it on!

Audi bikes
Audi's latest release, the new hardwood bike Duo, is a collaboration between the German brand and Renovo Hardwood Bicycles. Get ready for the smoothest two-wheel ride of your life, as the hardwood used in manufacturing the bicycle body absorbs jerks and vibrations better than any bike made of metal out there. Hop on to make a statement, and enjoy the ride.

Spielberg's yacht
Remember the envy you felt when you heard of Steven Spielberg's generous splurge on a $ 200 million yacht? Well, there's some good news for you, but that too comes with a price tag. The legendary director is now offering his yacht for charter at a whopping rate of $ 1.3 million per week, setting the record for the most expensive yacht charter in the world. This ultraluxurious vessel features countless decadent elements and facilities, including a stunning infinity pool with a fifteen-foot long glass wall which doubles as a movie screen. The yacht accomodates up to 12 guests and 26 crew members. Sounds well worth the green ones!

Food for thought
Do virtual video games actually make us smarter? While many picture the typical gamer as an overweight, sofa-bound pizza-addict, there's no denying the increasing importance of this question. Gamers argue that playing these games actually exercises parts of the brain that remain ignored through classroom learning. According to James Paul Gee, a professor at the University of Wisconsin-Madison, video games are 'goal-driven experiences which are fundamental to learning'. But some work better than others. For instance, World of Warcraft, very popular amongst gamers today, is perceived by many as unstimulating. However, American author and computer game designer Jane McGonigal believes these digitised alternate worlds are significant in their understanding of applied psychology, their ability to motivate, and the reward-based structure on which they are built. So slaying the dragon in Super Mario, or maneuvering through speeding cars in Crazy Taxi is a legitimate feather in your cap. Regardless, it's certainly food for thought.

The Strokes, Angles After a long five years, the iconic New Yorkers release their latest batch of sexy pop songs. The guitars sound as compelling as ever.

R.E.M. collapse into now The legendary band's late career renaissance continues with a fine new album that visits all the musical styles from their career.

The kills, blood pressures The duo reinvent themselves yet again with punky pop songs and smouldering slow numbers that feed into their dynamic as a platonic duo who ooze sexual tension.

Beady eye, different 5 gear Still Speeding Oasis lovers rejoice! Liam Gallagher is back leading his own band, and they sound as fun as his old band.

The Pains of Being Pure of Heart, Belong The young American wonderband's second album is a bouquet of great hooks and melodies.

6 this month things to do

1. Bob Dylan birthday concert: Ever since 1972, Bob Dylan's birthday has been celebrated in the beautiful hill-town of Shillong in Meghalaya with marathon concerts arranged by local legend Lou Majaw. These have achieved iconic status amongst Dylan fans around the world. This year promises to be the biggest, as Dylan turns 70. Be there on May 24 for all things Dylan.
Website: www.shillong.com

2. All tomorrow's parties: ATP is one of the most eagerly awaited annual British music festival held at Butlins Holiday Centre in Minehead. Fabled for it's exciting line-ups and intimate concerts, ATP is curated by a different musician or band every year. This year it's the turn of NY hipsters Animal Collective. It will be held from May 13-15.

3. Pune fashion fair: Held every year from May 13 to 15, this fashion event assists buyers and sellers in the fashion sphere to expand the reach of their brands. Although the Ahmedabad fashion fair has gained momentum in the recent years, there can never be too many in this industry. Just the thing for fashion enthusiasts and shoppers alike.
Website: www.biztradeshows.com

4. Monaco grand prix: This chapter of the world Formula 1 Championship is held on a narrow course on the streets of Monaco, making it one of the most dangerous and difficult race tracks despite the low average speeds. Be a part of the action from May 26 to 29.
Website: www.grand-prix-monaco.com

5. Mount Abu summer festival: Held every year from May 15 to 17 at Rajasthan's only hill station, Mount Abu. Set against a picturesque backdrop and cool climate, it is predominantly a feast of classical and folk music with added attractions like boat racing and some delicious local cuisine thrown in to make it worth your while.
Website: www.ficci-gitb.com

6. Robotics world show: With the hundreds of new inventions and innovations flooding the market on a monthly basis, this exhibition aims at the industrial segments comprising of power, pharmaceuticals, terminal automation and tank farm automation. Held from 26 to 29 May in New Delhi.
Website: www.kmgindia.com

Back to basics
For those who like classics, this handheld is just the thing. A collaboration between designer Yves Behar and a Danish phone company, the Aesir Copenhagen mobile phone is all about turning back the clock and 'restoring the phone to its original function; to speak with others with clarity and in style.' Available in both 18k gold or stainless steel, the phone sports sapphire crystal lenses, laser engraved keypad characters and is engineered for superior sound and displays seven languages. 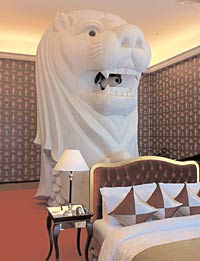 Merlion Hotel
If you think you've got it all covered just because you took in the sights of the Merlion in Singapore on your last trip, think again! Artist Tatzu Nishi, known for transforming public spaces around the world by building on and around them and creating temporary but memorable structures, has caught our attention yet again. And this time, Singapore's iconic Merlion is his inspiration. So give it up for the Merlion Hotel, created for Singapore's Biennale 2011.

The designer/ artist has built a luxurious hotel room around Singapore's 70-ton-white-cement national monument. The idea, unimaginably unique but predictably so, is to give audiences the chance to redefine their relationship with the half-lion-half-mermaid structure that is the Merlion. Open through the day for public viewing and at night for overnight stays (only a single night for each guest is permitted), the offer is on for a limited period till the first week of May. Book now and see Singapore's icon in a new light. It's a dog's world
The world's most expensive dog-a Red Tibetan Mastiff named Hong Dong-stays true to his name which means 'Big Splash' by making a pretty big splash. Looking like a furry lion, this pet was bought by a Chinese coal baron for a whopping $1.5 million (Rs 6.7 crore). According to the breeders, Hong Dong is a perfect specimen of his breed, and each time he is mated, the asking price would be approximately �10,000 (Rs 7.3 lakh)! The history of this breed is an interesting one. It is believed that Lord Buddha and even Genghis Khan owned one, and the breed is reportedly the oldest and purest in the world with only twenty specimens remaining today. In China, they are revered as reincarnations of nuns and monks and are believed to bring good luck. The next time you decide to attend a vintage car show, show off with these nuggets.

2. One of the largest collection of vintage automobiles can be found at the Cité de l'Automobile (National Motor Museum) Schulumpf Collection in Mulhouse, Alsace. The museum has over 600 cars from over 90 manufacturers, including 122 Bugattis.

4. To vintage car collectors, the vehicle's condition rating is the most important yardstick for judging the value of a car. These are given on the basis of a points system ranging from 40 (Driver car) to 100 (Perfect car). Below 40, the cars go to the scrap-heap.

5. Comedian, talk show host and avid car collector Jay Leno once quipped, "Any car can be a collector car, as long as you collect it!"

Russian caviar
Russia is all set to reclaim its identity as the premium exporter of caviar. Dozens of sturgeon farms have opened all over the country, where thousands of fish are tended to by trained workers. At regular intervals, eggs are carefully extracted through a minute incision in the belly which does not kill the fish. Such precaution is being taken after ruthless poaching which almost wiped out Russian sturgeon populations, and led the government to impose a moratorium on the Caspian Sea, lasting even today. Let's hope their output matches their innovation, and they succeed in monopolising the market.

Warhol's Liz #5
Warhol's next auction at Christie's, a portraits painted by him of Elizabeth Taylor, is estimated to rake in $ 30 million. In 2005 it was bought by hedge-fund manager Steve Cohen for an undisclosed amount in a private exchange. Slated to be auctioned at Phillips de Pury on May 12, the portrait shows the actress smiling with her eyes shadowed in blue. It was sketched the same year Taylor starred in the legendary title role in Cleopatra in 1963.