When Popeye gulps down his can of spinach and watches his biceps swell in response to the iron hit, it's easy to assume that's the only kind of food he has. In a more metaphysical world, that's exactly how fad diets operate. Typically, fad diets focus on similar foods, for instance cabbage soup, grapefruit juice and pro-biotic foods, and promise immediate results. In today's world where mood swings run parallel to bingeing and food craving and size-zero is a clarion call, such diets are undergoing inventive makeovers. The trend that took off in America in the 70s when Dr Robert Atkins became the first and last word in diets with his high-protein lowcarb regime is often deemed unwholesome by skeptics who swear by the school-book balanced-diet. In Atkins' defence, his conjectures, though backed by little medical evidence, are being recommended today by fitness instructors around the world. All said and done, one must move beyond belittling stereotypes of women who've outgrown sexy and understand fad diets for what they are. Here's digging into a fresh stock of fad diets , and the paranoia and hysteria they bring along.

DUKAN DIET
'France's answer to the Atkins, that's how this protein centred diet developed by ace nutritionist Pierre Dukan is best described as, in Europe. Even though it has been around for 30 years, it resurfaced in a contemporary avatar only last year, when its creator released the book The Dukan Diet worldwide. This diet works over four phases beginning with the attack phase, which lasts from two to seven days and recommends pure proteins.

For this, Dr Dukan provides a list of 62 high-protein foods including veal chops and game meats and prawns. This is followed by the cruise phase, which adds 32-vegetables to the existing list. After these two phases, the body's tendency to regain lost pounds is at its peak. This is tackled by returning forbidden fruits in two full-blown meals in what's called the rebound effect, in the consolidation phase. Dr Dukan refers to the fourth phase as the 'rest of your life' , this is termed permanent stabilisation and urges you to maintain your new body with three tablespoons of oat barn everyday and a pure-protein Thursday (attack phase). Celebs who've tried out the Dukan are Jennifer Lopez and Carole Middleton, the Duchess of Cambridge's mother. 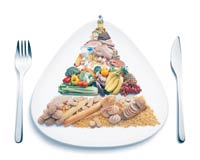 Fad diets require you to pick a single portion from the food pyramid
What works Unlike others in its league, there's a sense of permanence in this diet and slower weight gain post the dieting period What doesn't Eating lean protein, without intense exercising, adds unwanted calories and ups cholesterol levels. Also, the diet is fibre-less, which results in indigestion, headaches and mood swings. Note Each phase is drastically different from the other, so the transitions shouldn't be jerky. For instance, begin the second phase by alternating pure protein days with protein and vegetable days.

Baby food trains you to eat frequently and in small quantities
No, you're not getting fitter on chocolate chip cookies. Dr Seigal's cookies are hunger curbing, amino acid and protein filled ones, which should be munched on every now and then. Although they became a rage in 2007 when they hit retail stores, it was only last year that they turned into a plausible and fullblown diet trend. Dr Seigal's cookies are now kosher too, since they are natural, vegetarian and way more affordable than the earlier ones. You can choose from the blueberry, chocolate, oatmeal, coconut and banana flavours. In fact, he has also reduced the calorie count in each cookie by 33 per cent, which means one can increase the consumption, further cutting back on food cravings. The diet shot to fame when international media flashed before-and-after shots of Arizona's Marty Moorehead who lost 164 pounds in one year. Protein shakes are a good energy source during diets
What works Regular munching prevents falling prey to hunger, a common cause of diet failure.

What doesn't The cookies are not the best tasting ones and unlike other diets, there's no alternative.

Note
It's not designed for those who can't stand too much sweet.

BABY FOOD DIET
Sleeping like a baby may be great for your body, how about eating like one? You can start by noshing on cans of baby food. These include both powdered ones, which can be mixed with warm water, or milk and ready-toeat organic mixes. For an all day diet, bottled baby food can comprise full meals, backed by mid-day snacks of baby foods like gloppy bananas and warmish mashed potatoes.

This can be supplemented by a bowl of fresh fruit or finely chopped vegetables enjoyed on an empty stomach early morning. Try it in moderation for a week and go ahead only if you have the stamina for it. Should you have any doubt; the diet is also a hot favourite with celebrities like Reese Witherspoon and Jennifer Aniston.

What works Free from additives and fat, infant food is rich is packed with vitamins and minerals. It encourages eating like babies in small portions and at regular intervals, a prerequisite to effective weight loss.

What doesn't The unsalted and bland taste doesn't go down well with everyone. Also, since the food is highly processed and requires next to no chewing, it may leave a void in your appetite, prompting bingeing soon after.

Note Taking a cue from a baby's unhurried life, the diet doesn't quite complement a high-activity lifestyle or any form of intense exercising.

PALEO DIET
Eat like the caveman in the Paleolithic age did. That's the bottom line this diet thrives on. Drawing on beliefs of the time, the diet deems grains, sugars, vegetable oils, legumes and dairy as toxins and depends on nature instead. It recommends animal fat of all kind, eggs and vegetables. Typically, the meat can be cooked in an oven, crock pot or pan using coconut oil or lard, with some roasted or steamed vegetables on the side. You can feast on salads, soups and stews sautéed and marinated in fresh herbs like basil, garlic and ginger. The diet has managed to attract plenty with its quirk factor. In fact, celebrities like Uma Thurman and Mel Gibson have chosen to take it a level up and eat raw meat instead.

Interestingly, Berlin's Sauvage restaurant puts a tasteful spin on the trend with entrees like nut-based butter, gluten-free cakes and smoked salmon dressed in herbs. Begin with a 14-day schedule.

What works Since it negates unnatural foods, you're free from additives, synthetic colouring and preservatives. This detoxifies and strengthens natural immunity.

What doesn't The diet negates commonly consumed ingredients like grains and dairy, which may be hard to give up.

Note Lack of sweeteners can cause low blood pressure. Keep a chocolate bar handy at all times.