Finland: The day that never ends

Nudists, the Northern Lights and a sun that never sets — Finland is a wonderfully surreal country to visit. It’s like one of those movie scenes when the protagonist engages in soliloquy inside his head, the soundtrack pauses and all he can hear, besides his words, is the sound of his breath. It’s two in the morning and mashed banana sunlight surfs over the Gulf of Finland and washes through the bay windows tinting the room a shade of yellow. I wake up, dinner clothes and brogues still on, disoriented and beginning to panic. “Where am I? How much did I drink last night? Did I offend anyone?”

And that’s when I remember— I’m in my room at the Hilton in Helsinki, and I couldn’t have drunk too much because I never made it to dinner. I’ve been conned by Finland’s midnight sun.

I had been forewarned. While checking in, the concierge had iterated, “Make sure you draw the blinds when you sleep,” a curious request that came without an explanation. I knew that the sun shines a bit longer than usual in Finland. I had visions of sipping a hot cuppa in an igloo near the Arctic, clothed in fur, looking up at the midnight sun. I just didn’t quite figure that I’d encounter it in Helsinki.

“Nature has its sense of justice,” remarked Teemu Tyry, my host. “It’s true that in Levi, in the north, the sun doesn’t set at all during the summers. But even in Helsinki we get about 20 hours of sunlight.”

A short tram ride to Keskuska Centrum, the city centre, brings me to a bustling, yet lazy cornucopia of cafés, shops and historical buildings. A brilliant white cathedral known in Finnish as Tuomiokirkko is the symbol of Helsinki and sitting on the steps, you get a superb view over the roofs to the South Harbour. Helsinki derives a lot of its character from its proximity to the sea—it’s surrounded on three sides, with almost 100 km of coastline and over 300 islands. The South Harbour is a popular tourist hangout. Its dredge-free waters allow massive cruise ships to dock right on the water’s edge. There’s an accordion orchestra playing in park next to the harbour and everyone’s out.

The Finns are no home-birds, especially on days like this. Open-air cafés throng with people—bikers, motorcyclists, pedestrians, tourists, and locals alike. I have breakfast with a few locals at the dock: fried herring and mashed potatoes—delicious and cheap staple fare (e10 or approx. Rs 690, beer e2 or Rs 138).

The 250-year-old island fortress of Suomenlinna is a short ferry ride away. A monument to military architecture, built over six small islands, it offers a peek into Finnish history and gorgeous views of the Baltic. And you can have a few beers while you’re at it. Declared a UNESCO heritage site in 1991, it’s now home to an artist’s commune, who pop back and forth to Helsinki on the ferry.

Next stop is Pehlisaari beach, located on another island just off the coast. But on the edge of the island I find myself faced with people playing volleyball in the buff. Whoa! I’ve stumbled on a nudist beach and in my vest and shorts and am attracting serious attention, not all of it welcoming. There’s only one thing to do—let it all hang out! The wary glances cease and my intrusion is forgotten. 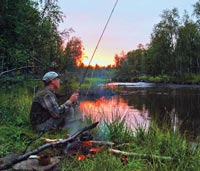 One of the last wildernesses of Europe, Levi

For the next couple of days I rove the city on foot. There’s a wide range of clubs and bars and an eclectic nightlife. Helsinki has a strong club culture and a buzzing live music scene. Tavastia is one of the best rock clubs in Scandinavia while Storyville, next to Parliament House, has been named one of the top one hundred jazz clubs in the world. The restaurants serve great seafood, as you’d imagine. Dishes like burbot and burbot roe in winter; perch, salmon and crayfish in summertime; and Baltic herring and vendace in the autumn.

But Finland’s real treat lies about 900 kilometres from Helsinki, about 90 minutes in a plane—the small resort town of Levi, which sits a mere 170 km from the Arctic Circle. Levi is at the frontier of one of the last wildernesses of Europe, a land of reindeers, lakes and fells (a fell is a hill with few or no trees) where the summer sun never sets. The Levi Fell village is a blend of Lappish exoticism, high-quality digs and a well-developed range of services. Levi has as many as 44 ski slopes and 886 kilometres of snowmobile routes. Gazing at the night sky while on a husky or reindeer safari, with the Northern Lights (Aurora Borealis) creating magical shapes, is the stuff postcards are made of.

No surprise, then, that Levi is known as the “official” resort of Santa Claus. Santa’s home is a fell called Korvatunturi (Ear Mountain), in Lapland. In fact, the Santa Claus office is located in the town of Rovaniemi, 170 kilometres from Levi. Scores of cafés sit side by side with restaurants, art galleries and activity parks. A visit to the Husky park in the village of Köngäs is a must for canine lovers. The manager marches up with a reindeer alongside and tells me that if I pucker up, the animal will kiss me. After tacit consultation with the sleepy animal, I decline.

Snow arrives in Levi in October and the town transforms into a hub of winter sports activity. With the Northern Lights illuminating the winter until the end of January, the summer months, with their unending daylight, are when people golf, hike, fish, and go on bike rides. Levi changes character with the seasons—the party atmosphere of winter gives way to a more tranquil summer. It’s the kind of place you need to visit twice. On my last day in Finland, I take a one-and-a-half hour catamaran ride from Helsinki to Tallinn, the capital of Estonia, just 80 kilometres away. It’s like stepping into a fairy tale, perfectly preserved. I have lunch at the Town Hall square, and walk along the cobble stoned paths looking at the quaint buildings. What’s more, the alcohol’s cheaper here than in Finland. The boat even stops just before entering Finnish waters to allow everyone to have their last cheap shot.

Harri, a big burly Finn seated next to me, asks if I want a beer. And when we disembark, he grabs me by the collar and insists I accompany him and his girlfriend Nita to a Ducati show in the city. It’s Sunday and the Moto GP race is being screened on a giant screen in the city, and a thousand bikers are here to cheer Mika Kallio, the Finn rider who recently made it to the top rung of Moto GP. Finland is serious biking country.

My flight back to Delhi is at night, but the sun’s still shining, of course—it lends a surreal air to my whole experience. As though untouched by space and time, Finland’s verdant rolling landscape just adds to the effect. You’re seized by the desire to do and see as much as you can, but if you stop for a moment, then utter stillness and silence takes over. Timid thoughts which usually would have been drowned out by all the clutter, stop and alight. Wonder if Dali ever came here—the dreamlike ambience of fluid time and space would have been right up his alley. Finland is a land where the clock really melts.

WHERE TO STAY
Hilton Kalastajatorppa Hotel
Overlooking the Gulf of Finland, the hotel has one of the most picturesque views in town. Have dinner on the terrace with sea views at Restaurant Meritorppa. Rooms from e100-e300 (Rs 6,900-Rs 20,700) inclusive of breakfast and taxes.
Address: Kalastajatorpantie 1, FIN-00330, Helsinki, Finland,
Tel: + 358 (0)9 45811
Web: www.kalastajatorppa.hilton.com

GETTING AROUND
Take the Ferry: The South Harbour is a hub for local water traffic, with small ferries departing for Suomenlinna Maritime Fortress, Helsinki Zoo on Korkeasaari Island, and the historical town of Porvoo. Sightseeing cruises leave from the Market Square, from May to the end of September, offering a maritime perspective of coastal Helsinki. If using public transport, a Helsinki smart card costs e33 (Rs 2,277) for a day.

WHAT TO DO
Summer Festival: The annual summer festival in May/June boasts live music, flea markets and a mix of tradition and contemporary art. Vappu is celebrated on May 1. The partying begins the previous evening, and on the following morning, everyone congregates in Kaivopuisto Park for breakfast and more socialising.

Stockholm Party Cruise: The cruise leaves Helsinki at night and reaches Stockholm the next morning after a night of revelry, singing and dancing. Spend the day in Stockholm and catch the cruise back at night. Tickets range from e60-e150 (Rs 4,140-Rs 10,350).

Make a splash with water sports