Trying on a new shoe? Did you say new? Almost none of the footwear styles in vogue today is less than half-amillennium old.

The shoe's journey in time 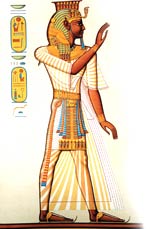 The journey so far
Step into a posh shoe store in Mumbai’s Linking Road, MG Road in Bangalore, or anywhere else for that matter, and take a look around. High-heeled and platformheeled shoes for women, boots, sandals, moccasins, different formal shoes for men—there’s an amazing variety on offer. Some are “new trends” and others apparently “back in vogue”. But are these really recent fashions? History tells us that none of the footwear styles you see today is less than 400 years old. The history of shoes is, indeed, one worth recounting.

There is evidence that covering the feet was one of the first things early urban settlers did. Necessity compelled them to invent a method of protecting their feet from the rugged terrain. Records of Egyptians, Chinese and other early civilisations all contain references to shoes. 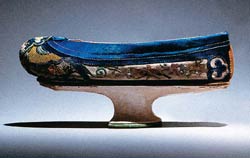 In 1938, archaeologist Luther Cressman (from the University of Oregon) excavated at Fort Rock Cave, located in central Oregon, US. Cressman found dozens of sandals below a layer of volcanic ash. Named after the site where they were first found, Fort Rock-style sandals have since been reported from ancient deposits in several Northern Great Basin caves. They are believed to be between 7,000 and 10,000 years old.

In fact, in reality, the nattiest high-heeled or platform shoes you can find today are flat pumps compared to some of the shoes in fashion a few centuries ago. No, our ancestors didn’t wear long heels to ensure they could cross potholes full of water with ease. You guessed it right! As always, shoe style was dictated by fashion, at least, among the rich.

But there was much more to shoes than just fashion. In the West, shoes have had a place in marriage ceremonies for centuries. In some cultures, the bride’s father threw his shoes at the bride and the groom to show that the authority has been transferred from father to husband. In England, shoes were used like the wedding ring. The bride passed her shoes to her husband, who then gently hit her on the head with the shoe.

Of course, all that’s fashionable is not always the most practical or comfortable. Take the case of the ‘pointed shoe’ (pictured on the left) that originated in France, reportedly the invention of a Count of Anjou who wanted to hide his deformed feet. Later, stilt-like wooden platform shoes became the rage in Venice. The heels eventually became so high that women could not walk in them, and servants were hired to help the women travel.

The ‘modern’ shoe, however, arrived only in the 19th century. It wasn’t until the left-shoe last and the right-shoe last were discovered in 1818 that the left shoe was made differently from the right one. Before that, the same shoe could be worn on either foot.

Mass-produced footwear came next, around the middle of the 19th century. Until then, shoes were hand-made in the cobbler’s shop, with nails or pegs used to bind the sole. But by 1900, most footwear was being made, by machine.

In 1845, the Rolling Machine, the first machine to find a permanent place in the shoe industry, came into use. This was followed in 1846 by Elias Howe’s invention of the sewing machine. Today, there are no major jobs left in shoemaking that are not done by machinery. An automatic toe laster for Goodyear Welt shoes today can make 1,200 pairs in an 8-hour day.

Golf watchers are different, too