For the love of A song

Recording a song isn’t just about getting the sound right or having a great voice. We learnt how it’s done at Mumbai’s state-of-the-art Blue Frog Studios, to let you in on a few secrets.

Remember those days when you would call up your dad’s friends travelling abroad to get you the new LP, Revolver by Beatles or Clash’s London Calling? We have come a long way since. The Vinyls were pressed, LPs were cut, then came CDs that were burnt to music— today that is brazenly stolen, euphemistically known as downloaded.

Technology has evolved rapidly but what hasn’t changed is that music still needs to be produced, recorded, tracked, mixed, edited, mastered and produced. Haven’t you often wondered what does it take to cut an album, create a saleable sound, mass market music that sounds perfect? We escort you through the process of burning a song onto a disc with Aurora Jane, an Aussie singer, songwriter, producer and guitarist—who sure packs a punch. 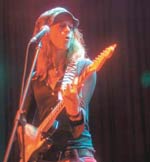 On the road 24/7, Aurora Jane has a story like few others. Once described as “the secret love child of Jimi Hendrix and Ani Di Franco”, this fiery-haired, guitar-wielding songstress traverses uncharted territory with her energetic live shows and refined studio recordings. Aurora Jane’s latest album Universal Language was recorded in Byron Bay, Australia and New Delhi, India. In India as a part of the Pubrock Festival, she performed twice at Blue Frog (in Lower Parel, Mumbai) in June. And fell in love with the place.

Then, she and her band visited the Blue Frog Studios and promptly booked it. “I’m my own producer, so it helps,” she says, adding “but, mate, these studios, the engineers and the facilities out here are truly world class.” What’s the differentiator at Blue Frog Studios, I probe. “Undoubtedly, the energy of the place.

The engineers, sound recordists, mixers, composers like Ashu and Dhruv, why even the waiters at the club are so full of energy— rarely found in studios anywhere in the world,” she says. We walk into the studio together. What we see inside is impressive. What we don’t, even more so. The entire floor is raised on pillion screws with vacuum between the concrete and the wood. The hardwood flooring has an underlay to balance the ceiling absorption. The sound-proofing of the rooms is complete. We go inside and even my normal breathing sounds eerie, almost.

We are on the job now. At first, one records all basic music tracks like the bass guitar, drums, keys, and a scratch vocal. Then it’s time to overdub the balance of the music parts, like more guitar work, back-up vocals, etc. The musicians go inside the recording booths, which are completely insulated and soundproof. The studio microphones are condenser microphones, which are different from a dynamic microphone that one uses for performing live. Inside the studio, headphones are one of the most crucial equipment, as we can listen to all the musicians playing in sound-proof rooms. These microphones also have, what is called, the “popper stopper” that actually helps cut down on the loudness.

The second step is “mixing” where all the music parts are made to come together as a song. Each track is carefully balanced and EQ’ed (audio equaliser) to fit into the mix. EQ is probably the most important effect at the disposal of an audio engineer. It can be used to solve problems, to create special effects, and, most importantly, to help instruments blend together correctly.

The first thing the sound engineer does today is set the (volume) “levels” on the mixing board, to look for presence and loudness (presence has to do with proximity to the microphone, loudness is how much of that microphone gets mixed into the recording), balance (of instruments against each other), blend (of the instruments together) and life-likeness of the sound and equalisation (do some instruments sound overly thin/nasal, or tubby/fat?).

It is fascinating to watch as the recording progresses. Mixing, indeed, is time consuming. All tracks must be heard properly at correct levels and EQ. Once they are properly set, effects can be added for colour and improved sound. “At the professional level, one song can have as many as 20 mixes to choose from, for the final mastering,” explains Jane. What about discipline, the lack of which has, more often than not, ruined the careers of many a genius, I ask. “Oh, right, I would say my discipline comes in the editing that follows soon after mixing.

Since I am also the producer of most of my songs, my sense of discipline needs to be particularly strong. I listen to the mixes, and edit the tracks. Sometimes, it might mean re-recording a few parts or dubbing over particular sound, but mostly, it’s all about how to get rid of portions and sounds that might be your favourite but do not fit into the scheme of the entire track,” she says. This is the final stage—to make a song have punch, power, dynamics and overall blend with other songs on the CD. Mastering makes the song “Radio Ready”. “There are special studios that only do the mastering. I’m getting mine done in Sterling Studios at New York. It takes years of practice and experience to master tracks into a CD,” says Jane. So, the next time you listen to a song on your CD player, we wouldn’t blame you if you stopped to think about the contribution of the many unsung heroes behind every great track. And if you do want to watch the process of a song being recorded, make a request to Blue Frog. They might just oblige.
TweetYoutube