Day of the chef

He owns seven restaurants, has published four books and has hosted two TV shows. Seven years ago he was named one of the world's top 40 chefs of influence. Here's the kicker: he's still only 33 years old. George Calombaris' culinary journey is legendary. At 24 he'd already won two Chef Hats and was named Australia's Young Chef of the Year. At 27, he launched The Press Club Restaurant and Bar in Melbourne in the old printing room of Melbourne's Herald Sun newspaper. It was an overnight sensation. Of course he's most famous outside Australia for his role on the exceedingly popular TV show Masterchef.

The success did not happen overnight. Calombaris started professional cooking at just 17. In other words, more than half of his young life has already been spent in kitchens. "In Greek households, like in Indian, it's all about the family. As a young lad in a Greek setup, I saw the influences that family has on one's personality and approach to life," he says. "If my grandmother or mom had not spent as much time around food and in the kitchen, I wouldn't have made it in this line of work:" When he opened The Press Club there was a lot of talk about taking on a huge project at that young age.

MUST READ: The best chef's tables Aphrodite White chocolate mousse with a raspberry center & rose jelly
There were "skyrocketing expectations and ambitious plans", he admits. "As a chef and restaurateur, it is important to believe, and this belief must come from the heart. You have to be able to inspire, direct and then follow up. Pay attention, look over your business, you must also double as a micro-biologist and look at all the details." For Calombaris, a great restaurant is getting the macro and micro right and getting all the little things done well.

Now, five more ventures are operational. There is the Mediterranean Middle Eastern restaurant, Maha Bar and Grill; a second modern Greek taverna cuisine restaurant, Hellenic Republic; PM 24 and St. Katherine's, both of which opened this year; and The Belvedere Club, which is a little 45-seat restaurant open for only six moths during the summer. 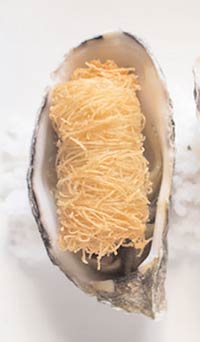 Oysters Kataifi Oysters baked in phyllo pastry dough & served on the shell
The Belvedere, located on the uber-exclusive Greek island of Mykonos, was Calombaris' first international project "[It's] one place that I love returning to because I get so inspired". His seventh restaurant Mama Baba opens early next year and will serve Italian-Greco dishes that "make you think fondly of your grandmother, but with today's ingredients, technique and flavours".

So what do all the accolades mean to him? "It is gratifying to hear praise, all the more because I see myself as the one in the kitchen." In addition to his seven restaurants Calombaris has also managed to publish several cookbooks.

There is The Press Club and Hellenic Republic: Greek Cooking from the Hellenic Heart. The most recent release, Your Place or Mine, was co-authored with his masterchef co-host & celebrated English chef Gary Mehigan. "He and I have worked together and we both have a great understanding and love for food. So it was lovely to collaborate with him and create a book about food that we love to cook and eat". The duo will soon release their second book together -Cook with us. 2010 Greek Salad The Press Club's modern variation of a classic recipe
Masterchef holds a special place in Calombaris' heart. "People of all ages should be able to identify a carrot from a parsnip. That is what, as a host, I am most proud of. The show needs to be about the contestant, their cooking, and how it changes their life. As hosts and judges, we are to only shape and mentor contestants' dreams." In the second run of MasterChef Australia, he also had the opportunity to try out Indian food. "I firmly believe that the traditions stemming from a country are beautiful - there is nothing wrong with going with the classics and that's what I think Indian cuisine is". Calombaris feels it's best to introduce regional cuisines to a wider audience through a cooking show since it makes the exotic more accessible and demystifies foreign ingredients and dishes.

Finally, there's one aspect of cooking that he personally encourages every step of the way. That is moving to sustainable and environmentally friendly ways of cooking and serving. "It is important to respect our surroundings and where things come from, just as we would our families," he says. "I hope it becomes a trend rather than remain a fad".