The great reward of a road trip to the hills is arriving in one piece. The great reward of a road trip to the hills is arriving in one piece.

We were on the highway for about twenty minutes when we saw our first crash. We’d just loaded up the tunes, traced our route to Dharamsala on the map and set off with all the enthusiasm you would expect on day one of a ten-day vacation. And then a scooter ran into another scooter and a man was left lying on the tarmac, his leg twitching, his eyes rolling back into his head.

And that was a portent of things to come—on the way to little Tibet, we saw upturned lorries, burnt-out buses, dead monkeys and dogs and even a dead cow, swarming with flies. Bon voyage, indeed.

I’ve done my share of road trips—throughout America, the UK, Europe and Australia. And I love them. There’s no better way to explore a country than with the earth beneath your wheels, the music blaring and that sense of mission, freedom and opportunity that the open road provides. So, I was naturally excited to undertake my first Indian road trip, to Himachal Pradesh. I saw myself coursing through the lyrical plains of Punjab to the foothills of the Himalayas, climbing through glorious mountains, gasping at the plunging valleys and snowy peaks. I had a Mercedes M Class SUV for the journey, a nimble wagon which I primed with maps and sweets and a cooler full of drinks. After selecting the right CDs, we were raring to go.

But then the assault began, the experience of the Indian highways. In India, there is little to enjoy about the open road. It’s bumpy, potholed and laced with speedbumps. The traffic is aggressive and lawless, especially the larger vehicles, the lorries and buses. Might is right on Indian roads, it’s a bully’s domain. And there is danger everywhere, mortal danger at that. I’m no quivering madam when it comes to dodgy terrain, or narrow passes, but it’s not the roads in India that present the greatest challenge, it’s the drivers. On hill roads, the buses are driven by cackling ghouls intent on mayhem— they force you to the edge of the precipice, horns blaring, while tourist taxis pester at your shoulders, overtaking on blind bends, forcing and shoving all the way. They seem to be motivated only by selfishness and an appetite for risk—you push your way forward, shouting your intentions to all concerned with your ever-present horn, and to hell with everyone else. 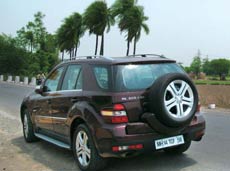 It’s just not possible to lose yourself in the scenery when a bus is hurtling in your direction.

And what scenery exactly? Yes, the mountains are marvellous, the great forests, the icy peaks, etc. But what about man’s contribution to the vista?

The small towns are scarcely picture-postcard stuff. What made the Incredible India campaign truly incredible was the way that it ignored the hillocks of trash with the infants playing among them, the reek of sewage, the sight of villagers defecating as you drive through. Where is the charm of the Indian village? Where is the pride? On the road from Chandigarh to Dharamsala, I saw only conglomerations of traffic and dust, dominated by advertising murals for cement and soft drinks. Without Ambuja or Pepsi, there would scarcely be a lick of colour on this drive, and what a drab scene that would be. As we pass through one chocked bottleneck of a town to another, we’re accompanied chiefly by roaring lorries, the whirl of dust in the air, and dilapidation in every direction. This is an ugly land, ramshackle and primitive—there wasn’t a single town that we passed through on the way to Mcleod Ganj that we weren’t glad to leave.

knock nokia, who's there?

Two to the floor