The new C220 CDI from Mercedes-Benz is here and, boy, it does fill up your senses when you take it out for a drive! 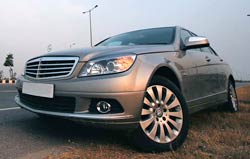 C220 CDI
The great thing about driving a Mercedes-Benz is not the fantastic build quality or the fact that a Merc can, if pushed, perform very well on the road. Actually, it is the sense of well-being you get when you look out of the front windscreen and see the three-pointed star on the bonnet. It really does make you feel good.

Make no mistake, this is a good car to drive, and because the new C-Class, despite being slightly longer than its predecessor, is still cramped at the back, this is not a car that should be driven by a chauffeur.

We were driving the new C220 CDI, the only diesel in the C-Class line-up in India. Mercedes also has the C200 Kompressor available in petrol. It might seem like the same engine as in the old C-Class, but it is not. The engine now develops 170 horsepower, 30 more than before and the added power shows. This car might be a diesel, but it moves really fast and on our secret road, we easily crossed the two-ton mark. It does not sound like a diesel and it does not perform like a diesel.

It, however, drinks a lot of diesel. While we did drive aggressively, the car returned an average, according to its on-board computer, of about 9.5 km to every litre. We also threw the car into hard corners, letting the Electronic Stability Programme (ESP) kick in.

When it comes to looks, you must admit that the new C-Class is quite a handsome car, far better looking than the previous generation. One can actually argue that this looks better than the BMW 3-series, but crucially, the C220 CDI, which costs a bit more (at approximately Rs 30 lakh), smashes its direct competitor in performance.

Expect the Bavarian riposte soon, but for now, if you have Rs 30 lakh to blow on a car, you cannot do much better than this. And whenever you are feeling bad about your wallet getting lighter every single time you service the car (because that will be expensive), just look out of the front windscreen.