Railroad entrepreneurs were never quitters. When the idea of the first commuter train with sleeping and dining cars was mooted in the 19th century, it seemed like a decadent dream in an era of rattle-bang and rudimentary locomotive transportation. Trains were still a novelty but didn't promise comfort. Mercifully, things changed in 1864, when American inventor and industrialist George Mortimer Pullman introduced Pioneer, famously called 'Hotel Cars'. The still-running Pullman cars are a reminder of this golden age when sleeper and lounge cars delighted travellers with hotel-like interiors and service, and were sheer luxury.

Fast-forward a century and a half, and trains have widened their network, chugged across countries, introduced class barrage, brought slam-doors and pantry cars on board, upgraded to high-speed, and have survived cut-throat competition from road and air travel. While road trips have become more of a horror story than wonder vacation, and low-cost airlines have created a mass market for air travel, the charm of boarding a train remains undiminished for true romantics. There's also a degree of nostalgia attached to train travel with it inevitably being linked to some childhood memory of a missed journey, new friends, shared meals and maybe even a fleeting romance.

Letting the train take the strain is also the perfect way to discover a new land-it's fast enough so the scenery constantly changes yet slow enough to stretch every moment. Here's a global selection of six trains that provide a sepia-tinged return to the leisurely days, when travel was an adventure rather than an irritant; as much about the journey as the destination. So hand the porter your luggage, hop aboard and relive the golden days of railroading through these spectacular journeys. Golden Eagle Trans-Siberian
The Trans-Siberian Express is a one-in-a-lifetime train ride-an epic 15-day journey spanning two continents and seven time zones. Apart from being the longest railway tour, covering 6000 miles, this train actually promises a no-better-way to experience Siberia. It plies the famous Trans-Siberian route between Moscow and Vladivostok, as well as special tours of the Silk Road, Russia's Arctic and the Crimea. New for 2012 Those worried about tight quarters can now book the new, extra-large Imperial suite on the Golden Eagle Trans-Siberian Express. The Imperial Suite is spread across a generous 120 square feet and boasts a luxurious, fixed, king-sized bed and a dedicated sitting area with a dressing table. It also includes a large en-suite shower, under-floor heating, individual air-conditioning, a wardrobe, DVD/CD player, and two large windows.. The suite's guests receive a selection of complimentary drinks from the premium bar , complimentary laundry service, and room upgrades to the next available category at selected hotels (depending on trip itinerary). They also have the option of dining in-suite, attended by their private butler. Royal Scotsman
Travel straight into the heart of the Highlands and enjoy the drama of sweeping glens, towering peaks and mirror-calm lochs. The Royal Scotsman's stately pace allows for plenty of time to reflect and fully-appreciate the beauty outside your window. There are seven itineraries to choose from that range between two and seven days. With space to accommodate just 36 passengers, it's great for those who value an intimate, luxury setting with gourmet, five-star dining, wine-pairing and superior service. All the train's cars, save the 1928-era diner, were originally created in the1960s, but have been recast in Edwardian style with varnished woods, polished brass and fine fabric. Particularly enchanting is the open-air platform at the rear of the train.

New for 2012 Special Offer: Book a 4-night Classic Journey for the price of the 3-night Western Journey with savings of up to $1,530 per person. This offer is valid for April, May and October departures. Bookings for the above must be made by March 31, 2012. Venice Simplon-Orient-Express
Stepping aboard the Parisian art deco carriages, one enters a world of espionage, intrigue and romance. The wheels start to turn, and another chapter in the legendary train's story begins to unfold. Wood burning stoves and etched glass panels on board evoke the sophistication from the roaring 1920s. The train owes much of its mystery and intrigue to writer Agatha Christie's detective Hercule Poirot who stepped aboard the train in the novel, Murder on the Orient Express. The rest, as they say, is history. Shared bathroom facilities take the gloss off an otherwise glamorous train whose inaugural journey deposited travellers to what was once Europe's wealthiest city, Constantinople. The Venice Simplon-Orient-Express, with its restored, 1920s vintage cars, is arguably the world's most famous luxury train. There are many itineraries to pick from: they include one from Istanbul to Venice, and others that include Venice, Krakow, Dresden, Prague and Paris. New for 2012 Enjoy two complimentary nights at the Hotel Cipriani in Venice when you book the April 4, 2012 departure from Venice to London or Venice to Paris. This offer includes transfers from the hotel to the rail station and a champagne welcome. Journey must be booked before March 31, 2012. El Transcantábrico
Spain's El Transcantábrico, a narrowgauge luxury train, chugs along 800 miles of incredible scenery across Spanish northern coast at a modest speed of 40 mph. The 52-passenger train has six sleepers, each with four double compartments with en- suite facilities. The train is operated by Ferrocarriles Españoles de Vía Estrecha (FEVE), which means Narrow-Gauge Spanish Railways. New for 2012 The new luxury service, called Gran Lujo, is as indulgent as it gets. It features all Preferente Suites, which take up half a train car and are 129 square feet each. The Preferente Suites have a double bed, long sofa, flat-screen DVD, computer for your private use (wi-fi when in stations) and lots of storage in closets, under the bed, and under the sofa. The Grand Lujo train accommodates only 28 passengers, thereby offering a much more intimate travel experience for discriminating travellers. However, these cabins are also spacious enough to accommodate upto three people. 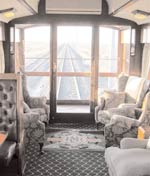 Pride of Africa
The 14-day trip from Dar Es Salaam to Cape Town onboard Rovos Rail's Pride of Africa is an ambitious itinerary, covering a third of the Africa and 5742 kilometres. This private experience stretches across South Africa and Botswana, touches Zimbabwe at Victoria Falls, and crosses Zambia into Tanzania. From Kimberley's diamonds to a deluxe South African game lodge, from the stunning Victoria Falls Hotel to majestic Great Rift Valley, each day is unique. The Pride of Africa offers interesting equipment, excellent meals with a wide variety of South African wines and friendly on-board service. The coaches have been painstakingly rebuilt with Rhodesian teak. The Pride of Africa also features some of the largest rooms on a train anywhere, with mostly king-sized beds, windows that slide all the way up and a fabulous open-air deck. The two restaurant cars have international menus and the chefs whip up delicious meals. Fresh local ingredients and traditional game dishes are frequently on the menu. Also, each morning, a made-to-order breakfast is served in the diner. Lunch and dinner are multi-course affairs on lovely china, silver and linen. New for 2012 The Pride of Africa runs between Cape Town and Dar es Salaam six times in 2012, as against four till now. The dates to watch out for are March 12-25; June 30-July 13; Oct. 15-28 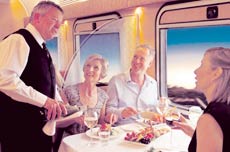 Sunlander
The Sunlander is Australia's longest running and most endearing rail journey. It meanders through the best Aussie land has to offer: The Great Barrier Reef, the Kuranda Scenic Railway, the islands of Fraser and the Whitsundays, and also a rainforest. The Sunlander train links all of them, with its overnight service crossing 1,045 miles on the east coast of Queensland, Australia, from Brisbane to Cairns. The scenery is spectacular as are the stopovers. If you choose to take the train straight through, it takes about 32 hours. The Queenslander Class aboard the Sunlander is worth the ride and features creature comforts against a backdrop of superb dining, first-class accommodation and exceptional service. Passengers are accommodated in twin berth sleeping compartments offering all the comforts of home, and receive the highest levels of service from the dedicated team of onboard personnel. New for 2012 The Sunlander has upped its game to three departures weekly in each direction, and the Queenslander Class is offered on every one instead of just once a week.

Products that can drive you crazy