Snobs may shudder at the idea, but if Indian food can evolve, why can't we have something much more evolved than lassi or lager with it?

Sourish Bhattacharyya
Frederic Engerer, unlike most Frenchmen in the wine business, does not bask in the reflected glory of his country’s iconic wines. He can afford to, because he presides over the fortunes of one (Château Latour), but he’s constantly pushing the envelope. An astute salesman, he knows if he has to sell Latour in Asian markets like Japan, China and India, he has to find a way to make his acclaimed Bordeaux “First Growth” wine agree with the well-travelled palate of his top consumers. He goes about it by finding Asian food matches for a wine that, if we follow the well-thumbed rule books, should go well only with a chunky rack of lamb or a meaty steak. But what about Nigiri Sushi? Or, something that agrees better with us, say, Murgh Kali Mirch? When I first met Engerer, a former Boston Consulting Group executive,

I was sceptical about his belief that every wine has a match somewhere in the world. I had maintained till then that it was impossible to marry Indian curries with Bordeaux’s robust top red wines—I’d even floated the theory that the more expensive a wine, the less likely was it to agree with Indian food. A couple of weeks ago, the Taj Group’s flying top chef, Hemant Oberoi, set my doubts at rest. At the opening of Varq, the new (and very winefriendly) Indian restaurant of New Delhi’s Taj Mahal Hotel, I met Oberoi after a year and he sounded like a child who had found a new toy as he talked about the food matches he had discovered with the redoubtable Château Latour. He said the wine travelled well with Murgh Khatta Pyaaz (a Masala Craft speciality that’s sour and tangy) and Murgh Kali Mirch. I found both choices odd because the received wisdom on Bordeaux reds is that chicken is a no-no, unlike fuller red meats like duck, lamb and beef. 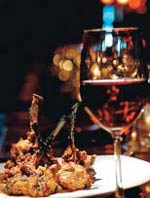 Bonding across cultures: Contrary to received wisdom, even a high-end French wine can fit seamlessly into an Indian meal
But Oberoi, who has cooked in more than 80 countries in his 34-year career, made an important point. If you are planning to host a wine dinner with Indian food, you’ve got to tweak the dishes a little. It is the standard practice whenever any wine dinner is held anywhere in the western world. At Latour, Oberoi reduced the peppercorns in Murgh Kali Mirch and dished up an understated version of Murgh Khatta Pyaaz. At the end of it, he was able to rewrite the rules of matching a top-end Bordeaux wine with Indian food. Snobs may shudder at the idea, but if Indian food can evolve, why can’t we have something more evolved than lassi or lager with it? It may be a good idea, however, to remember Oberoi’s note of caution.

We tend to confuse spicy with pungent. Our spices are delicate and can get wine friendly but black pepper and chilli simply overpower the wine. At Varq, for instance, you can order a Riesling (its house brand is the middle-of-the-road Hugel, 2004 vintage, from Alsace, France) and the 2003 Merlot from Shafer Vineyards, in the Stag’s Leap district of California, especially if you are having the Lamb Shanks in Dum Curry. The best part of matchmaking with wine is that it comes with the promise of unforeseen possibilities—you can’t predict the match but, as in life, there’s always one for each wine.