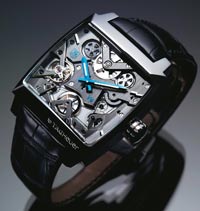 20th July 1969—the first manned lunar landing, one of the greatest achievements in human history. Neil Armstrong steps onto the moon’s surface at 02:56 GMT on the 21st of July and 19 minutes later, he’s joined by Buzz Aldrin, sporting an Omega Speedmaster, featuring the chronograph calibre 321, a movement capable of defying gravity and measuring extremely brief intervals of time. The electronic timing system on the lunar module was not functioning correctly, so Armstrong had left his Speedmaster there as a back-up.

Fast forward 40 years to 2009 and Omega releases the Speedmaster Moonwatch Apollo 11 limited edition series, powered by calibre 1861, celebrating the first and only watch fit for the moon. The small seconds counter (sub-dial) on the watch is a medallion which features an adaptation of Apollo 11’s famous mission patch—an eagle descends to the lunar surface with an olive branch representing peace in its claws. In the distance, far above the horizon, is earth. The patch was designed by Michael Collins who remained in the Apollo 11 capsule as Command Module Pilot, while his colleagues Armstrong and Aldrin were on the moon. “You’re not just paying for a watch here, you’re paying for a piece of history,” says P.H. Narayanan, Omega’s brand manager in India.

It’s true—history, legacy and technical excellence could be yours for the price of the moonwatch, or for that matter, any watch with complications. Bling is all very well, but it’s the grande complication (any function other than the indication of hours, minutes and seconds), that worked for NASA, and still works for hardcore horolophiles.

Switzerland is watchmaking’s spiritual home, and Swiss history is full of tales of men fascinated with time. Generations of watchmakers who devoted their lives to innovating timepieces that could measure 1/10th, 1/100th of a second. For them, it was not about precision alone, but what they could add to these pieces. One such man was Edouard Heuer, who in 1860, at the age of 20, set up a workshop for watchmakers. At a time when all watches were wound with a key, he dreamt of a keyless one. In six years was born his patented invention—a keyless, crown-operated winding system. The famous Tag Heuer brand owes its name to him. 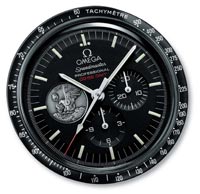 OMEGA MOONWATCH: The only watch fit for the moon

“It’s the romance, the idea of owning something so precise and perfect that lures watch connoisseurs and collectors to these pieces,” says Manishi Sanwal, General Manager, LVMH, the luxury group that owns Tag Heuer. “Take our calibre 360. With the ability to measure 1/100th of a second, it is the most precise chronograph in the world.” Chronographs, like stop watches measure extremely brief intervals of time, and the wheel set inside the calibre 360, rotates a good 100 times in a second. “Can you imagine the amount of power needed to maintain such a high frequency? Can’t you help but marvel at the invention?”

Jean-Frédéric Dufour, CEO, Zenith, couldn’t agree more. “By opting for these watches, you’re appreciating the legacy, technical excellence and the painstaking way in which they’re put together,” he says. “Crammed with upwards of a dozen features, a single watch requires up to a year’s work, 5 to 50 separate operations per piece, and about 50 separate grinding operations for the bridge dimensions. Twenty watchmakers are actively involved in making one movement and no fewer than 18 different metals are used.” Dufour is celebrating the 40th anniversary of Zenith’s El-Primero movement this year. Created in 1969, the movement measures time with 1/10th of a second accuracy, a performance made possible by using a balance that oscillates at 36,000 vibrations per hour. As a double push-button chronograph, the movement also has an instantaneous jump calendar, and can accept other complication add-ons like the tourbillon.

The tourbillon is one of the most revered movements in the business—a mechanism that is designed to counter the effects of gravitational pull. And while chronographs work for Tag Heur and Zenith, for the tourbillon, watch connoisseurs turn to brands like Jaeger-LeCoultre, one of the foremost pioneers of this art. Jaeger’s Reverso Gyrotourbillon debuted to great fanfare last year—a spectacular creation incorporating a gyroscope and a reversible face. They have even built enamelled tourbillons. “Our enamelled tourbillon boasts a hand painted continent on the dial, and just the artwork accounts for 200 hours of manual labour,” says Tarun Sharma, Country Head, Jaeger-LeCoultre. Another popular complication is the perpetual calendar. “Isn’t it great to own an intelligent timepiece that knows how long the month is, and even adjusts to leap years?” asks Sharma. Most perpetual calendars need to be adjusted every century or so. But, as if that weren’t good enough, Frank Muller has gone on to develop its own eternal calendar, which needs adjustment once every thousand years. What a relief.

For the world’s leading watchmakers and collectors, the grande complication is a hallmark of haute horlogerie. They view such watches with the awe that others view high-performance sports cars. It’s a good analogy—after all, both boast impractical and dazzling engineering, and are painstakingly built, using hundreds of components. Jaeger has the AMVOX2 DBS Transponder, a first of its kind timepiece that allows the owner to lock or unlock their Aston Martin DBS simply by pressing the sapphire crystal. And, from Tag Heuer, we have the much awaited Monaco V4. Taking a good five years to near completion, the watch combines a lot of car mechanisms, a first for the watch industry.

But these watches somehow have a different appeal. They’re far more exclusive than Ferraris for example, and so, have that additional in-the-club cachet. Both Sanwal and Sharma recount tales of persistent buyers waiting for years on end to collect their limited editions. “A particular Jaeger fan from China always ends up buying the first piece in our limited edition series,” laughs Sharma. So what if most of us can’t tell his minute repeaters from his calenders? “By sporting a watch that defies gravity on his wrist, he’s not just defying the world, but defying the universe.”