After a bumpy ride, A.D. Singh is on the verge of expanding his restaurant portfolio. But he’s not taking the easy route. A.D. Singh
I’m having lunch with A.D. Singh, the celebrated restaurateur, and if I’m not mistaken, he seems a little nervous about the launch of his new Delhi restaurant, which is odd, when you consider his track record. After all, this is the man who started the wildly successful Olive brand, a man with 15 successful launches behind him whose restaurants have transformed neighbourhoods, captured the times and become landmarks in the evolving nightlife of our metros. Few have had such a storied or successful run in the restaurant game as Singh.

And the way he frames it, you can hardly fail in this business anyway. “The restaurant scene in India is wide open,” he exclaims. “It’s not like London or New York, which are full, and extremely competitive. This is still a young market. You can do pretty much anything here, and if you do it well, it will succeed.” So, why the trepidation about Launch #16? “This isn’t Olive we’re talking about,” he says. “I’m launching a contemporary Japanese restaurant called ai. It’s the biggest gamble of my career.” We’re having lunch at Olive Beach in Delhi, one of the more laid-back of Olive’s incarnations (currently, there are two more in Mumbai, and one in Bangalore). It’s a balmy setting, all white and cyan and beige, tucked discreetly away in the leafy hush of the Hotel Diplomat in Chanakyapuri. ai, on the other hand, is a world apart—on the 2nd floor of the MGF Mall in Saket, South Delhi; it is split into three distinct sections.

A smoky bar/lounge complete with jazz stage, a bright and airy restaurant, and then a gorgeous summer terrace outside. It’s the last thing you’d expect to find in a mall. And that’s to say nothing of the food. “Indians are squeamish about sashimi,” he says. “A place like Olive is an easy sell—Italian food, good service, a nice vibe. It’s a formula. But Japanese is another ball game.” Japanese food has had a fitful lineage in India to date. The first restaurants popped up where there were pockets of Japanese expats—in Bangalore and Chennai—but they were basic noodle/tempura joints, nothing special. When the five-stars started to dabble in this space, they, too, played it safe. 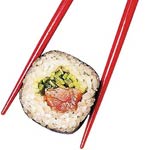 The Hyatt Regency in Delhi installed a teppanyaki place (T.K’s Oriental Grill), which has endured well enough, and the Grand Hotel opened Enoki, a yakitori restaurant. But teppanyaki means frying on an iron plate, and yakitori means chicken skewers. Neither involve the leap to raw, wet fish. Only the Metropolitan Hotel took the plunge properly with Sakura, six years ago. Then, the Taj Palace and Tower Hotel in Mumbai opened Wasabi in 2004 and a whole new chapter opened up. Helmed by the celebrated Chef Masaharu Morimoto— formerly the Executive Chef at Nobu—Wasabi was launched amid great fanfare and the gushing of food critics. Vir Sanghvi described it as the “best dining out experience in India”. Rashmi Uday Singh spoke of two eras of oriental cuisine in Mumbai—pre- and post- Wasabi. “There was the sense that ‘we have arrived’, you know?” says Singh. “That India’s finally a properly foodie country.

And it’s true to an extent—it is a benchmark, it shows where we are as a culture.” The success of Wasabi added immensely to the aspirational cachet attached to Japanese food. “Aspiration is what’s driving markets in India,” says Singh. “Look at the wine and cigar boom. And Japanese is notionally the trendiest cuisine in the world—all the top stars in the world love sushi. It’s healthy, it’s chic.” Post-Wasabi, Japanese cuisine has started popping up all over the place—a second Wasabi in Delhi, the cross-fusion Tetsuma in Mumbai, Dahlia in Bangalore. And increasingly, the popularity of sashimi is beginning to establish itself. Maybe sashimi doesn’t need Indianising, after all. “You mean the spice thing?” says Singh. “We recognise that. See, we’re not a classic Japanese restaurant, with standardised menus. We’re contemporary Japanese, which is more avant garde. So, that leaves room to adapt a little. When I was checking out our chef (Britisher Grant Brundsen from the London restaurant Zuma), he served me tuna sashimi with a spicy sauce. 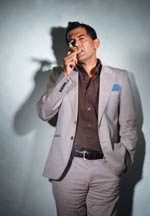 They were Japanese ingredients, but they had a kick.” The launch of ai comes after a turbulent patch for Singh. In December 2006, he was forced to close Olive Bar and Kitchen in Delhi, which had been dubbed, only two years earlier, one of the best new restaurants in the world by Conde Nast Traveler. The location was breathtaking—acres of gardens and a view of the Qutb Minar—and for the three years that it was open, it became an essential Delhi experience. But the neighbourhood committee complained that commercial activity is meant to be prohibited close to a monument, and the Supreme Court upheld its complaint. Singh is clearly still sore about the verdict. “It’s just not true,” he says. “The Indian government has a restaurant in the Red Fort and in the Elephanta Caves. I don’t think it was just my restaurant that was the problem. My landlord put a spa there, too, and, I don’t know, maybe ‘spa’ has connotations for some people.

Anyway, they sealed the whole space.” It was a severe setback. Since Singh kept his staff on, he was haemorraghing cash. But equally, it forced him to seek out new spaces and get back on his feet. And in the process, he found three spaces that he liked in Delhi, so he took them all. Now, he’s on the verge of a major expansion. And typically, he’s not taking the soft option. With a hit brand like Olive, it would be easy to diversify and take it mass market. But he’s not just in it for the money. “I’m in this business to make restaurants where I’d like to go,” he says. “I make enough money.” So, all three restaurants are entirely different. His first was Olive Beach, his second is ai, in the MGF Mall, and the third will be what Singh describes as a “restaurant bar/lounge concept, in partnership with Arjun Rampal, the actor. Multicuisine, DJs, lovely garden, a really hip international space.” There’s something inevitable about Singh partnering with a Bollywood star.

Olive, Mumbai
His restaurants have always attracted a glamorous crowd—he’s a Page 3 regular himself. But when I mention Page 3, he shrugs—“it’s a business”. And it’s true, his public profile is a core business asset. He’s not your typical restaurateur. “I’m not a food guy, you won’t find me in the kitchen with the chef, tasting things,” he says. “And I didn’t design these places— that’s all Nozer Wadia. He designs all my restaurants. He’s a genius. I choose the space, and I create the concept. That’s always been my approach.” This is how a restaurant starts for Singh—he aims for a feel, and then he finds a space. It’s how Olive happened. He was on holiday in Phuket with friends, lazing around in the same old beach restaurant. “It had a lovely lazy feel and it made me think—there’s no lazy timeless space in Mumbai.” So, with this mood in mind, he found a space in Bandra and enlisted the talents of the mercurial Nozer Wadia. And Olive was born.

ai, Delhi
Its impact was immediate and far-reaching. Not only did it put Bandra on the map—awakening south Bombay to the energy and opportunity of the suburbs—but it also raised the profile of the standalone restaurant, along with Indigo, the Salt Water Grill, Tetsuma and others. The glam set had a new place to call its own. “When the first Olive opened up in Bandra,” he says, “it was crazy. We were jammed. Everyone was there. Everyone.” Singh hopes, of course, that ai will reach Olive’s heights. So many memorable occasions, with marquee stars, took place within its walls. “I remember a couple of big stars, who are very much together in the papers these days—their whole courtship happened at Olive. One night, this guy, one of the biggest actors in the country, came in and wooed her right in front of hundreds of delighted diners—I’m talking about walking past the table singing songs, holding roses with his teeth. It was incredible.” He can’t mention names, of course, but the stories keep coming. Like the actress who had a secret thing with her director and insisted on being smuggled through the kitchen to the back table; the spats that have erupted, real and fabricated, at his restaurants; the affairs he’s seen blossom and the marriages he has seen falter. It’s not the Bollywood stars that excite Singh, though. It’s the sportsmen.

One of the treats of having a hot restaurant is that you meet your heroes. “Some of these guys were Gods to me growing up,” he says. “Like Clive Lloyd. Or Graeme Smith or Wasim Akram. I didn’t just say hi, I sat there for hours with them.” Singh is a huge sports fan. He takes golfing holidays (current handicap, 10). And if he’s not playing a few holes, he’s down the gym or playing volleyball with his friends. It shows. Between the sports and his hectic schedule, he’s staying in pretty good shape for a restaurateur. Now with his multiple ventures in Delhi, the once loyal Mumbaikar has bought a home here, and divides his time pretty evenly. There’s a lot of flying in Singh’s life. A lot of reading on planes. He’s reading William Dalrymple’s City of Djinns now. As the desserts come out, Singh tries to downplay quite how fabulous his life sounds. There’s a flip-side to running hot new restaurants. Sometimes, a place can have too much of a buzz. Like that time four years ago, when a nondescript lady walked into his former Olive restaurant in Delhi, and all hell broke loose. “She didn’t have a booking. She said she’d wait. Then a scruffy guy came in, said he was with her.

Sushi
And just as he walked up to her, five people came out of nowhere and arrested them. It was a drug bust—this guy had cocaine on him. They sent her home—she was obviously a plant—and they told my team that they were involved. Right in front of us, the cops picked up the phone and called the press.” It was a media frenzy and his business was hammered. “Sonia Gandhi was due to do a book signing at his restaurant the following week. She cancelled.” And she wasn’t alone. But thoughts like these are far from Singh’s mind now. What’s occupying it is the official launch party for ai, and a ritzy Delhi crowd is pulling into the MGF Mall. They make the somewhat surreal journey through the deserted mall, past the mannequins in the window displays, and finally into ai, a piece of fusion Japan. Models and fashion designers, top hoteliers and the Deputy High Commissioner for Peru—they’re all here for A.D. And for the trays of nouvelle Japanese cuisine, the inventive canapés and pink ginger martinis. As the party gets underway, Singh looks around and beams. He’s in his element now, no nerves anymore. “You know what? I think I’m going to be OK!”