I am on a 12-lane highway so wide that if it weren't for the divider, the Airbus A380- the largest passenger aircraft in the world- could not only land on it comfortably, but there would be enough space for another intra-country jet to land alongside as well. And if the width wasn't enough, the road is so straight and true that one can actually see it curve at the horizon!

Now, you would have to agree that no matter how smooth the car or how high the horsepower, a road like this does get monotonous to drive on. And when all you have are light poles, power grid lines and endless stretches of sand lining both sides of the road for kilometers on end, the monotony could reach suicidal levels.

Thankfully, I haven't gotten to that stage mainly because driving the latest generation Hyundai Verna is anything but monotonous. In fact, it's quite refreshing and is packed to the gills with stuff to indulge in as well. To begin with, there's a comprehensive trip computer that let's you know your fuel consumption, average speed and other parameters. There's also a high-end stereo with steering mounted controls and USB and auxillary inputs. 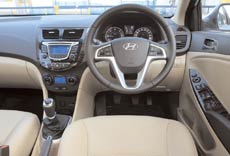 The new Verna is a very comfortable ride, with spacious interiors and great equipments
And for those who care for safety, the car gets six airbags besides ABS, EBD on the top of the line version. It also gets rear parking sensors with camera, digital climate control and a keyless entry and start.

Clearly, Hyundai has worked very hard not to leave any stone unturned. The company is offering the C-segment buyer everything that competitors like the Honda City, the Maruti SX4 and the Volkswagen Vento have to offer and more. This strategy extends to the drive-train as well. With the option of 1.4- and 1.6-litre engines in both petrol and diesel along with the option of an automatic drive, the drive-train options on the new Verna are unprecedented not only in this segment but also in a few segments above.

The one I am driving is a 1.6-litre petrol coupled with a four-speed automatic. The engine specs on paper are truly outstanding for the segment the Verna operates in. It clocks up 124bhp, which is as much as the Honda Civic and the Toyota Corolla make. Specs for the diesel 1.6-litre engine are even more outstanding with nearly 130bhp and 260Nm of torque.

As for the 1.6 petrol, it gets variable valve timing. Not only does this augment the car's performance, it makes the car economical as well. Now, with a four-speed auto, the engine's complete potential does not come to the fore, but it was still quite clear that it works fantastically well in the top end.

Even at 5000rpm tapping the throttle made the Verna shoot ahead with verve. It has a refined engine and one that revs effortlessly, even though it does get a tad loud at higher revs. As for the automatic gearbox, it works best when left in the fully auto mode instead of using the manual override mode. The kickdowns in D are reasonably quick and the upshifts are seamless. It works really well in relatively sedate city conditions.

Not only is the new Verna refreshing inside, it's also well put together, with a great finish that exudes quality. It also has an outstanding exterior design, even though some might find it a bit busy. Our only complaint, if any, would be the lack of dynamic ability.

But then, given its comfortable ride, spacious interior, an elaborate equipment list and good seats, not to mention good visibility and ease of city driving, it makes for a good buy.