In Jorhat, you can immerse yourself in the forgotten history of Assam and the life of a plantation “Burra Sahib” all in a weekend. Thengal Manor
Who doesn’t love a winter weekend—breakfasts in bed, lazing around, endless cups of chai? How about doing this all at a tea plantation, in a colonial bungalow once occupied by the plantation owner, or the “Burra Sahib”?

It’s all possible in the tea capital of the world—Jorhat, around 300 km from Guwahati—where you can discover tea’s journey from leaf to the cup and glimpse a bygone era. No matter which tea estate bungalow you stay in, it’s easy to imagine the lives of the past inhabitants—the crusty Briton enjoying high tea right where you lounge on the porch, or the “Burra Mem”, the lady of the house, powdering her nose in one of the huge bedrooms. Early risers can accompany the estate manager on his rounds and get a first-hand insight into plantation, or bagan, life. The best place is the fivebedroom Thengal Manor, the 75-year-old family home of one of Assam’s leading tea planters. Alternatively, you can stay at the Sangsua tea estate Bungalow. Both are operated by the WelcomHeritage Group. 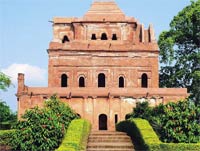 Kareng Ghar
If you’ve had enough of all things tea, nip over to Sibsagar, where history, myth and legend come together to weave an ignored narrative that made Assam what it is. Literally “the ocean of Lord Shiva”, Sibsagar was the capital of the Ahoms, who ruled Assam for 600 years before the British takeover. Ruins of the once all-powerful empire liberally dot the town. Like Kareng Ghar, a massive seven-storied palace, built in the 17th century to replace the existing structure. It was both the seat of power and a military base. And, uniquely, three of the seven floors are subterranean. That it was built using a special mortar made of rice and eggs is testament to the architectural prowess of the Ahom dynasty. Close by is Rang Ghar, a two-storey pavilion that served as the entertainment centre. Then there’s the 104 ft Shiva temple, Sivadol, built by an Ahom queen and considered to be the tallest in India. Make your last stop the Ahom Museum.

If you’re still not sure whether to pick this weekend break over, say, a shopping spree in Shillong, consider the privacy. There is no chance of bumping into work colleagues here. Internet connectivity won’t follow you here and mobile network is erratic at best. For some, that’s priceless.

The information
Getting there: A five-hour drive from Guwahati. The roads are decent, but the Jan Shatabdi linking the two places is more comfortable. Train number 2067 leaves Guwahati at 6 a.m. and arrives at Jorhat by 1.15 p.m. and train number 2068 departs Jorhat at 1.45 p.m. Then, get a taxi to Sibsagar.

Cost: Two nights at Thengal Manor cost Rs 9,499 for a double-room, including breakfast and a choice of lunch or dinner, till March 31. A similar package at Burra Sahib’s Bungalow costs Rs 8,299.